Cooking up a dream in St. Louis: Gerard Craft 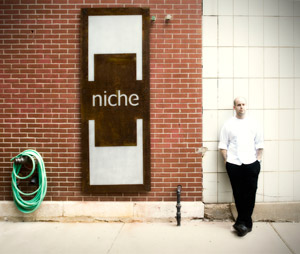 Chef Gerard Craft in front of his Niche restaurant.(Courtesy of Jennifer Silverberg Photography)

Just as a painter possesses the intuition to create the perfect brush stroke, a chef uses his talent to make braised pig’s head with the same level of refinement. St. Louis’ own Gerard Craft is such an artist, whose work can be seen at his restaurants Niche and Taste by Niche in Benton Park.

Craft has received accolades for his work, both locally as the winner of Sauce Magazine’s 2008 and 2009 “Favorite Overall Restaurant” and “Chef of the Year” awards, as well as nationally; he was a 2008 Food and Wine “Best New Chef” and was recently named a 2009 James Beard Award Finalist in the Midwest category.

Craft’s culinary career launched from an unexpected beginning. After dropping out of college in Salt Lake City, he began washing cars in the morning and dishes at night. While washing dishes at a local pool hall, Craft started to cook and found that he enjoyed the instant gratification he received after making a dish.

“I found I really liked the atmosphere of the kitchen. I don’t think school was for me,” Craft explained.

After working in restaurants in Utah, New Jersey and Los Angeles, Craft moved to St. Louis to open his first restaurant, Niche, in 2005. When asked why he chose St. Louis, Craft responded, “We wanted to open a restaurant but not go against the current of New York and D.C. Be a bigger fish in a smaller pond. St. Louis seems to appreciate food.”

Craft has certainly elevated St. Louis in the culinary world, as he is the first St. Louis-based chef to be named one of Food and Wine’s “Best New Chefs.”

The philosophy behind Niche is to make great meals. Craft expanded, “[I] let the ingredients speak for themselves. I do it differently at Taste than I do at Niche.”

After closing the bakery next door, Veruca, run by pastry chef Matthew Rice, Craft opened Taste by Niche this past summer. This new venture offers small plates and classic cocktails in an intimate space. On the subject of what prompted him to open Taste, Craft said, “I didn’t feel there was something like it going on [in St. Louis]. We wanted a place where we could hang out. Really good food, not expensive prices, with good cocktails.”

In this period of economic change, Craft is learning to adjust. He noted that the recession has forced him to learn how to create quality food at reasonable prices. Sustainability is also important to Craft: He has forged relationships with many local farmers, and around 98 percent of the protein served at Niche comes from Missouri.

With his love for simple French cuisine in mind, Craft is embarking on a new journey, as he is set to open a new restaurant, Brasserie by Niche, this fall. Brasserie is taking over the space in the Central West End that Chez Leon once inhabited. Craft will be serving up rustic food—a simple steak frite, onion soup or cassoulet, simple brasserie food. “We wanted to bring something again on the more affordable, more approachable take on French food. I think people think French food is over-the-top fancy, unapproachable. I wanted to show brasserie food as it is [in] Paris or Lyon.”

As the culinary world shifts, Craft sees everyday food as the new commodity. “It’s more and more becoming what people are looking for when they go out to eat. They either want high end and perfect or good comfort food.”

Craft’s parting words: “Follow your dreams. Work hard. I’m successful because I love to do it. It would be pretty miserable to do things you don’t love.”