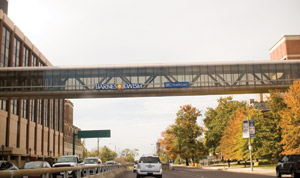 It’s likely that after surviving general chemistry, organic chemistry, physics and biology, Washington University pre-meds will be in pretty good shape for the MCAT and the years of medical school that await them after graduation. But doctors aren’t deemed good doctors because of their crazy skills with paper, pen and Scantron sheets.

How can the studying and test taking of college help prepare a pre-med for the very real task of saving people’s lives? In a sense, MedPrep is part of Wash. U.’s answer to this question. For years, this two-credit, pass/fail course has allowed students to shadow physicians as a way to acquire an up-close look at the unpredictable environment of an emergency room and the responsibilities that come with that coveted medical degree.

The around 100 participants in the MedPrep program attend lectures from Dr. Gregory Polites, assistant prof of emergency medicine, each Wednesday and have three-hour shadowing sessions at the Charles F. Knight Emergency and Trauma Center of Barnes-Jewish Hospital once every two weeks. The course touches base with the medical school application process and the subsequent years of study, and it also addresses some of the more long-term questions about residency lifestyle. Indeed, this course is deeply grounded in giving students pragmatic lessons and viewpoints about the medical profession. Many physicians give guest lectures, and they are people who, according to sophomore Betel Ezaz, “know the system inside out.”

“It’s really eye-opening,” Ezaz added. “[MedPrep] helps you realize whether or not you want to go through the entire [medical school application] process, and it makes you question whether you value medicine as a way of life.”

One of the lectures in the official course Web site is dubbed “The ‘Ooh, Ahh’ Lecture—Cases from the Image Bank.” With very graphic pictures and videos, it is presented early in the term and shows some of the situations participants might expect during the shadowing experience. Students are allowed to attend most procedures, except if patients specifically request their removal, Ezaz said. Births, deaths and resuscitations—all have been witnessed by students in the program as they follow their designated physicians of the week.

With rotating assignments that switch mentoring physicians, the ER experience is about proximity to action and not necessarily about one-on-one time with a mentor. Being deposited in the middle of a respected medical institution is nevertheless an opportunity within an opportunity. Junior Mariana Deseda has made friends with students from the medical school she shadowed, and she has found this to be a helpful complement to how Polites’ class has showed “not only how competitive [medical school] is, but how rewarding it is personally and professionally.”

However connections may happen, MedPrep students do benefit from gathering their share of personal impressions about saving lives—a task in which humanity and pragmatism sometimes arise in an interesting tug-and-pull.

“The first two nights that I shadowed, there was a man who came in after having a heart attack,” Ezaz said. “They had the wife into the room as they were trying to resuscitate him because he ended up crashing. At first, it was kind of like a typical problem of how to figure out how to make him live, but when they brought the wife in, it brought the human element out.”

Deseda witnessed the physical struggles of a heroin addict suffering from an infection, and sophomore Kevin Zhou saw his share of grotesque wounds. Zhou, who valued the demystifying factor of the course, highly recommended it to potential medical students.

“When you think of being a doctor, it’s so easy to think you just go there and see patients. You go to med school, study for a while, and you’re home free,” said Zhou. “But there’s so much involved you don’t realize unless you really talk to somebody. Some people go out and do that, but for a lot of people, MedPrep was the way to find out the subtleties of the profession.”