Gateway Battalion at Wash. U. 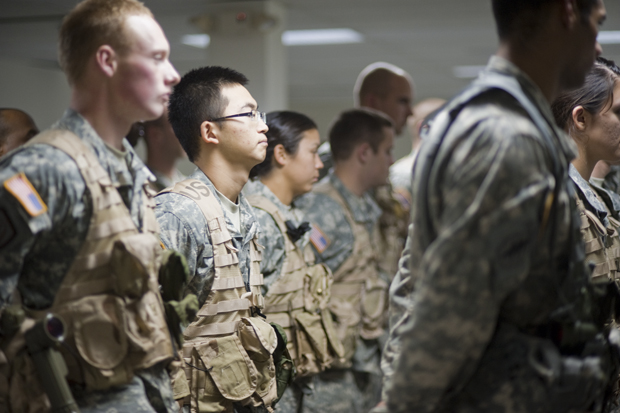 During the school year, students see signs and advertisements for a variety of student groups, organizations and associations. One small yet significant force on campus that is conspicuously absent from this list, however, is the Army Reserve Officers’ Training Corps (ROTC).

Composed of a distinct breed of highly dedicated, extremely driven students, it is an organization almost everyone on campus is aware of, though only few truly know much about it. Students undergo a rigorous application process for an ROTC scholarship and must coordinate the details of the award with the college itself. Washington University is one of 273 colleges with an ROTC that provides several students with the scholarships they need to attend. In return, the students are required to serve in the Army for eight years: either four years of active service and four of reserve, or eight years of reserve in total.

Throughout their four years in college, students take supplemental courses with fellow ROTC members at neighboring universities and shoulder increasingly heavy burdens as they progress. During their freshman and sophomore years, student involvement is limited to the classroom; courses include military history, leadership training, tactics and a variety of other topics. Junior and senior years are different: cadets are expected to gain more real-world experience as their responsibilities increase. 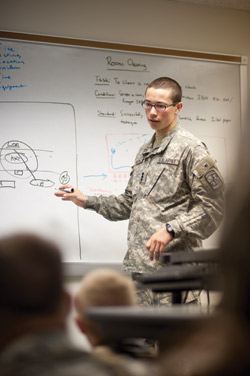 Once every several weeks, the cadets leave on the weekend for field training.

“We do more hands-on stuff there,” said junior Jonathan Deng, an ROTC member studying in the Olin Business School, about the trips. The ROTC travels to either Walden Springs (a National Guard base) or Fort Leonard Wood (a United States Army Basic Combat Training base), which are both in Central Missouri. This gives the cadets the opportunity to put into practice the skills they have been learning in the classroom.

Physical training, long associated with the military, is another staple of ROTC life.

“We work out for an hour and a half every day,” said Matthew Snider, a sophomore in the College of Arts & Sciences. “I wake up at 5 in the morning. You have to be up at least by 5:30 to get there on time.”

Students often see cadets walking around the Wash. U. campus on Thursdays in the Army Combat Uniform (ACU). Cadets are required to wear the uniform to ROTC class, and most students do not have enough time to change in between Wash. U. courses and the ROTC’s.

“On Thursdays, the entire battalion has a lab, so everyone has to wear the uniform,” said Rachel Atkins, a junior in Arts & Sciences. “We go as a battalion to do group exercises. It’s our Army Combat Uniform, so we have to practice how to wear it right.”

The rising role of women in the military is reflected by the students’ opinions.

“I don’t really feel at a loss at all,” Atkins said. “I never really have noticed that the guys treat me differently. If anything, it makes [the women] special.”

Despite their intense training schedule and heavy workload, the cadets wish to be viewed as regular undergraduates. 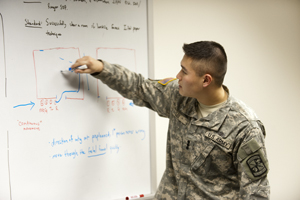 “We may do crazy stuff, but we’re still students,” Deng said.

All the cadets interviewed echoed that statement and said they felt a lack of knowledge about the program has resulted in ambivalance among other students to approach them regarding the ROTC.

Overall, however, student reactions to the ROTC itself have not been hostile.

“People have been pretty good,” Snider said. “The last bad thing that happened was [in 1970], when the ROTC [building] was burned down.”

The future of the ROTC, often a contentious topic on college campuses throughout the country, seems to be secure at Wash. U.

“I don’t see ROTC program dying out as long as people continue applying to Wash. U.,” Snider said.

Beyond the extensive leadership and military training they receive, ROTC members also value the connections between students that the program fosters.

“They’re my family,” Atkins said. “You’re with people at least three to four hours a day, every day. It definitely creates a bond.” Indeed, the best-loved aspect of the ROTC appears to be its constituents.

“The camaraderie is the best part,” Deng said. “The people are great. They’re some of my best friends.”