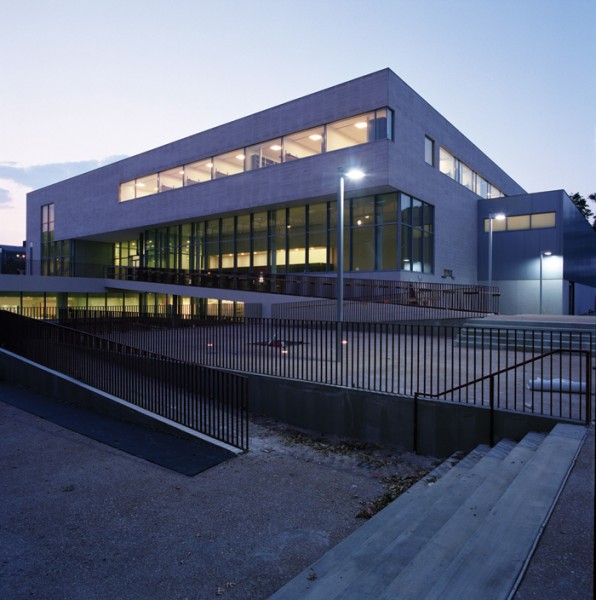 “Chance Aesthetics” and “Metabolics” are two very disparate exhibitions, yet, on some level, they accomplish the same purpose. Their opposing natures allow the two exhibits to play off each other to create an idiosyncratic duality. The viewer suspends reality for a short time in both galleries, allowing him or her to be swept up either by the uncertain connection between chance and choice or by the hypothetical urban and architectural future of humanity.

Walking into “Chance Aesthetics,” one is immediately struck by the notion that some of this couldn’t possibly be called art. Found art hangs suspended from the ceiling, violently smeared paintings are affixed to the walls and several glass cases stand in the middle of the room. The entire exposition exudes coincidental haphazardness.

This is fitting, as much of the work in “Chance Aesthetics” was created by artists who believed in “anti-art,” that is, challenging, rewriting and expanding the currently accepted definition of art. One of the two exhibits that opened at the Mildred Lane Kemper Art Museum last Friday evening, “Chance Aesthetics” attempts to capture the relationship between randomness and self-determination. Artists as varied as Ellsworth Kelly, François Morellet, André Breton, Jackson Pollock and the ever-controversial Marcel Duchamp are represented in the mid-sized gallery that houses the exhibition.

There are several pieces of note in the gallery. Possibly the most unusual (and disgusting) are the three works by Dieter Roth titled “Big Cloud,” “Kleiner Sonnenuntergang” (“Small Sunset”) and “Small Landscape.” Roth uses food to create his art. In these three particular pieces, he used a combination of sausage, mayonnaise and soft cheese. These objects were left to decompose after being placed on the paper, thus removing all control Roth had over the creation of the oeuvre. The result is something incredibly revolting yet simultaneously captivating.

Max Ernst, an artist the Nazis once labeled “degenerate,” has what is perhaps the most surreal painting in the exhibit. “L’oeil du silence” (The Eye of Silence) depicts a valley in which a structure made out of green goo rises out of the floor and up the crags of a cliff. The piece brings to mind Ray Bradbury’s “The Martian Chronicles,” with its fantastical structure constructed with fictitious materials in the middle of a desolate valley. One could argue about where the “eye” in “L’oeil du silence” is; there seem to be several eyeballs scattered throughout the green, goo-like structures, and the most prominent one appears to be blinking.

Finally, a Japanese artist named Kazuo Shiraga captures the emotion felt throughout the exhibit. Like many of the artists featured, he railed against the idea that chance has no place in art. In doing so, he created works that are suggestive of a collaborative effort between Jackson Pollock and Vincent van Gogh. Shiraga applied the paint in heavy swathes, often appearing to spread it directly on the canvas from the tube, much like van Gogh. He did this with Pollock’s sense of “splattering,” that is, spreading it in an almost random fashion. The result, “Dragons Emerging from the Forest,” is an angry tumult of red and black, looking for all the world like the streaks of paint will rise off the canvas and attack someone.

There are many more pieces worth mentioning, but these adequately encapsulate the essence of the exhibit. “Chance Aesthetics” is like the inside of somebody’s mind. One knows that order exists, but must dig deeper in order to grasp it.

‘Metabolics’: The future of building

Across the hall from “Chance Aesthetics,” “Metabolics,” the second exhibition to open at Kemper, could not be more different. It draws from three groups of artists: the Metabolists (a society of Japanese architects and city planners who envisioned cities to be large-scale, futuristic, organic entities), Constant Nieuwenhuys (an early member of the Marxist artist collective and revolutionary organization Situationist International) and the British cooperative Archigram (a futurist industrialized architectural movement that focused on hypothetical ventures).

While “Chance Aesthetics” portrays humanity’s relationship to coincidence, Metabolics has no such tendencies. Its purpose is to display the sinuous twisting nature of technology. Rather than being clustered in the exhibition by happenstance, every work in “Metabolics” winds together. Each appears to be subordinated to the exhibit as a whole, creating one larger individual work of art. In short, “Metabolics” almost appears to be an organic living being: All the separate parts are necessary, but they do not make the exhibition by themselves. Only when they are combined does Metabolics come into existence.

The viewer enters the gallery and walks along the edge of the room. On the wall are a series of pictures that resemble the lovechild of M.C. Escher and Picasso, a mix of mathematically inspired, impossible constructions and early analytic cubism. They boggle the mind and make the onlooker do a double take.

Strolling along the edge of the museum, observers pass along the outside of a serpentine warping, white guardrail of sorts. On the rail is a series of drawings by Kisho Kurakawa, one of the founders of the movement. The studies, made with a felt-tip pen and India ink on tracing paper, depict various areas of Japan, ranging from Tokyo to the entire country, in a manner reminiscent of the human body’s circulatory or nervous system.

Moving further along the wall, one sees designs for hypothetical blimps and something appearing to be a cross between a roller coaster and a coal-processing plant. Next to these are architectural drawings for futuristic buildings, none of which were designed to ever be built.

The bulk of the exhibit continues in this vein, with several works of art that make one stop and think twice before truly capturing what is going on. Requiring particular consideration is an edited photograph by Hans Hollein, titled “Aircraft Carrier City in Landscape.” An image of a large, super carrier is superimposed over a picture of an empty field. The image was the end result of Hollein’s interest in utilizing existing machines to create architecture, rather than designing buildings and cities from scratch.

Finally, one comes to the end of the exhibit and is able to walk around the inside of the guardrail. There is a 15-minute Dutch film that the viewer watches in bucket seats as it is projected onto a clear sheet of plastic. Exiting the gallery, the observer notices a work of art that appears almost out of place. Several pages from a comic book, featuring Ben-Day dots, are on display. While the rest of the exhibit resides in the future, this 1960s-era comic is most certainly rooted in the past. A closer look, however, reveals that the buildings in the background are evocative of numerous designs of the exhibit, thus justifying its inclusion.

Walking out of the exhibit and returning to the present, one feels almost let down. After all the breathtaking designs featured in the gallery, real life seems so ordinary and monochromatic.