WILD: it’s one of the best–and, frankly, one of the only–school-wide traditions at Wash. U. Since Team 31’s inception in 1973, WILD has evolved quite a bit, from a relaxed movie screening to a raucous semiannual concert. During that time, the event has also seen significant changes in leadership, changes in alcohol policy, and a myriad of exciting performers along the way. Check out this special edition of #tbt tracing the history of WILD through the StudLife archives:

According to this article from a September 1979 issue of StudLife, the idea for WILD grew out of a persuasive paper written for an English class in 1973. The essayist, Andy Friedenberg, subsequently created Team 31 (the original organization behind WILD, pre-SPB) with his suitemates in Rutledge 31. Then known as “Walk-In Lay-Down Theater,” WILD was originally a double-feature movie festival on Brookings Quad. However, this 1979 article hints at a coming shift toward live music.

Shortly after Team 31’s inception, Wash. U. hosted its first open-air music festival on Brookings Quad in May 1973. Though not the same as WILD (which was still just movies), the festival of jazz, rock and country performances likely set the stage for future quad concerts.

Spring WILD 1978 featured “M*A*S*H” and “Cabaret” as the two films. It was also one of the first WILDs to include live music.

WILD remained focused on movies through the early ’80s, but Team 31 had already started organizing other on-campus concerts. In April 1981, Team 31 brought in Irish rock group U2 (who were still relatively unknown at the time) for a performance in Graham Chapel.

By 1985, WILD was much more focused on the music. Team 31 received praise that year for bringing in rock and roll musician and notable St. Louisan Chuck Berry.

Past WILDs featured an abundance of activities, such as this “gyrotron” at fall WILD 1992. As if avoiding throwing up wasn’t already enough of a challenge… 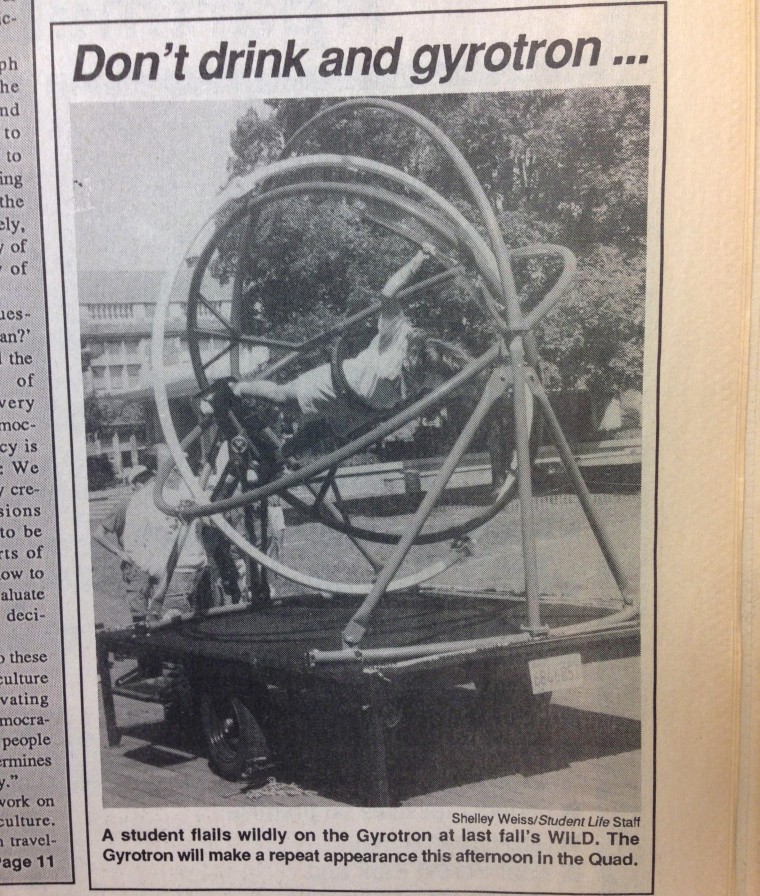 By fall WILD 1998, it was clear that the alcohol situation was getting a bit out of control. Three students were sent to the hospital during that semester’s event.

Spring WILD 2000 featured one of the most notable headliners in WILD’s history: OutKast. This cutesy ad shows the full schedule of events, which included student group performances and a full barbecue.

Students were allowed to bring entire kegs onto the Quad for WILD until fall 2003, when a new policy was put in place allowing students to bring a maximum of one six-pack of beer cans. This remained the rule until 2012, when all outside alcohol was banned.

Even under the new six-pack rule, students still had a fun time at WILD. Here, students lounge on a (real, not inflatable!) couch at fall WILD 2003, which featured Busta Rhymes as the headliner.

Wishing everyone a fun and safe WILD!

Have a year or topic you’d like to see featured in a Read All Over #tbt? Email [email protected] with your suggestions!