A “joke” propaganda video and other posts smearing the Student Union presidential candidates have emerged across social media in the days leading up to Tuesday’s election.

The video and posts to the anonymous social media platform Yik Yak falsely claimed that junior Kenneth Sng, the current SU vice president of finance, unilaterally canceled next fall’s WILD concert and that opponent Mike Holtz, a junior who serves alongside Sng as SU’s vice president of administration, was impeached from his position as president of Freshman Class Council (FCC) back in 2013. 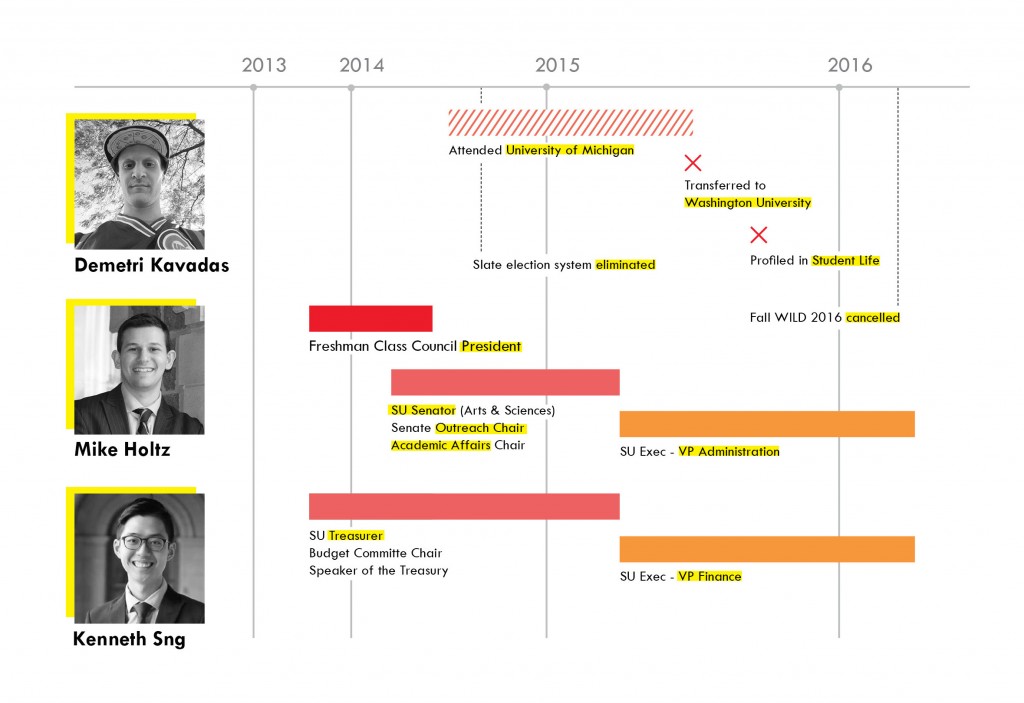 While distrust toward the current SU executive branch has been bubbling among students since the group announced the likely cancellation of fall WILD earlier in the semester, SU Exec members stated that no single member of the board was responsible for the cancellation and claimed that canceling WILD was the only option. Furthermore, students who worked with Holtz on Freshman Class Council stated that, though he was often difficult to work with, he was not impeached from his position.

The text in the attack video claims that Sng, as VP Finance, “Took Away Fall WILD….And He’ll Do it Again.” A handful of students—many holding positions in Student Union—spread around a Google Drive link to the video, criticizing him for his role in the cancellation of fall 2016’s WILD.

Holtz and Sng both said that multiple conversations between Sng and the rest of the SU Exec—including Holtz—occurred leading up to the cancellation of WILD, despite what some Yik Yak posts and the attack video claim.

Additionally, every member of the current SU Exec interviewed for this story described the cancellation not as a true decision, but rather as a reality imposed by uncontrollable circumstances. However, Sng and Holtz agreed that they handled the situation poorly in terms of how they broke the news to the student body.

Shortly after the video began circulating, Sng issued a statement against smear campaigns, not specifically addressing the video but alluding to attacks carried out on Yik Yak.

The statement included a pledge to run a clean campaign, urged other candidates to do the same and clarified that the decision to cancel fall WILD was “one that was made by Student Union Execs as a whole”—which includes Holtz.

“[The statement] is by no means an accusation of any candidates,” Sng said in an interview. “I don’t think this should be used as a weapon against a different candidate because I think that goes against the spirit of this campaign that I’m working on.”

Sng said that the anonymous personal attacks began when the cancellation of the fall 2016 WILD was first announced.

“I’ve had a lot of disagreements in Student Union [over] the past three years…[but] it’s always about trying to make Student Union better. But I’ve never been personally singled out with my name put out in [a] public forum…there’s never been character assassination of any kind,” Sng said.

Holtz also issued a statement condemning the video and its claim that Sng was personally responsible for the cancellation of the biannual concert.

The owner of the video, which is no longer accessible, was listed by Google Drive as freshman Jake Shainberg. Shainberg is not a member of SU and did not respond to requests for comment at the time of publication. A member of SU who knows him said that the video was made as a joke.

Despite Yik Yak posts to the contrary, Holtz’s fellow members of the 2013 Freshman Class Council said there was no impeachment process and that Holtz completed his term as president despite difficulties working with other members of the council. They also generally felt that Holtz had “great ideas” during the time that they worked together but struggled to delegate and to appear on time for meetings.

Students who worked Holtz him in the past said that some of the problems partially arose from the election of a “split slate,” as the elected group had not wanted to run for FCC together. In 2013, freshman candidates from different slates were elected—something that was uncommon during the slate system. The slate system has since been eliminated, with candidates running individually. Perpetual lateness and trouble delegating also marked Holtz’s time on FCC.

Since then, Holtz said, he has grown as a leader, is always on time to meetings and has learned to delegate through leading committees.

“I don’t think freshman year was perfect,” Holtz said. “I 100 percent could’ve done better, but I learned and grew from that.”