After over 11 hours of debate, the Student Union budget for the 2016-2017 fiscal year passed Sunday with no money towards fall WILD, but a large increase in the budget for the spring 2017 WILD.

Though some students may have heard rumors that the spring WILD budget has been sliced, the budget for the spring 2017 WILD will involve a nearly doubled talent budget comprised of the typical $100,000 for talent and $96,000 from what would have been the fall talent, according to the budget located on SU’s finance website at the time of publication. 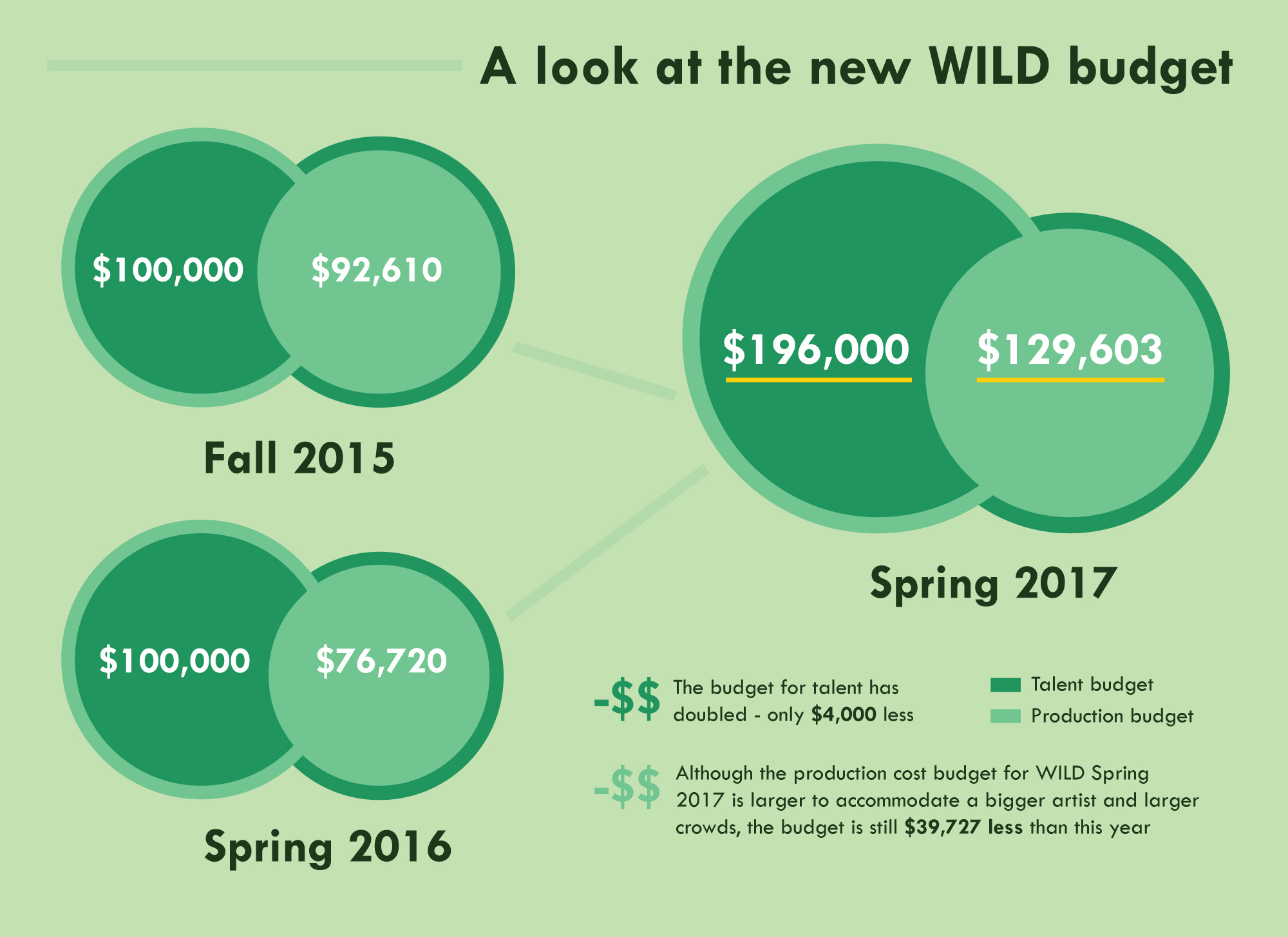 Social Programming Board had requested a 20 to 25 percent increase in operating expenses.

Student Union’s decision earlier this month not to fund fall 2016’s WILD sparked conflict between Social Programing Board and SU about transparency and student input, which culminated in this weekend’s deliberations. SU Treasury unanimously passed the budget, which features increased funding for next year’s spring WILD and $75,000 for debate-related programming. Meanwhile, SU Senate passed the budget with only two “no” votes.

A combined $200,000 was allocated last year for the fall 2015 and spring 2016 WILD talent budget. Although no fall WILD will be held next year due to the presidential debate, $196,000 has been earmarked for next year’s spring WILD talent, meaning that almost double the talent budget of a typical WILD will be available.

SU Vice President of Finance and junior Kenneth Sng said he and SU President and senior Jordan Finkelstein believed that with the infeasibility of fall WILD, they had an opportunity to pilot a larger spring concert.

“For a really long time students have been asking, ‘What if we brought a bigger artist on campus? What if it’s not like a hundred-thousand-dollar talent and it’s like a huge artist?’ So honestly, we saw it as an opportunity,” Sng said.

Sophomore Jonah Ragsdale, a former SU senator who resigned within three hours of the budget meeting’s end, argued that eliminating the fall 2016 WILD sets a precedent for a one-WILD-a-year model in the future.

SU President Finkelstein said that he does not believe the cancellation sets a precedent in any way and that he trusts future student body representatives to vote with the interests of students in mind.

A survey conducted by Senate earlier this month, which garnered 457 student responses, showed 73.9 percent of students surveyed did not feel there was clear communication about the decision not to hold a fall 2016 WILD.

“This was so extremely mismanaged. It’s the students’ money that SU is using—not SU’s money. There is agency involved in that, and there should have been more communication to the students about the situation,” a student reported on Senate’s survey.

Other students felt more enthusiastic about the possibility of hosting the presidential debate in 2016.

“We all love WILD and getting crazy, but it’s such an honor to host the debate, and I think that you guys should make it a bit more clear to the student body that it is primarily the main reason that we can’t host a fall WILD,” another student wrote in response to Senate’s survey.

SPB will receive $129,603.54 in production fees for spring 2017’s WILD—which is $42,074.06 more than the average production cost over the past three years—in anticipation of the bigger event to cover increased operation costs and higher agent fees.

Instead of a fall 2016 WILD, programming is being proposed to increase student involvement for the presidential debate that will be held on campus on Oct. 9. While all tickets to the debate that will be given to the University will be distributed to students through a lottery system, only 200 to 300 students are expected to be able to attend, based on number of students who won tickets to the 2008 vice presidential debate.

For this reason, SU has decided to use money made available from the cancellation of fall WILD to fund debate-related programming in order to promote student involvement.

In 2008, SU, alongside other student groups, funded debate programming including the “Take a Stand Rally,” political art installations and speaker presentations.

When Washington University hosted the vice presidential debate in 2008, all specially allocated funds for debate-related programming were used up. For this reason, SU decided to allocate a greater sum of money considering this year the University will host a presidential debate. SU will allocate $75,000 for this budget, an increase of $20,000 from the $55,000 allocated for debate-related programming in 2008.

In order to balance out this increase in funding for programming, SU did not accept a proposed $59,000 to be allocated to free exercise classes, although Sng noted that SU will look to fund exercise classes in future years.

While Sng was ultimately responsible for balancing the budget, he wanted to increase transparency throughout the process by getting more students involved and releasing the comprehensive Budget Allocation Manual (BAM) to make student group leaders more aware of the process by which they can apply for and receive funding from SU.

“I feel like budget allocations mean nothing unless students feel like it’s a fair, transparent and consistent allocation. Honestly, at this point in time, I’m really happy, and I’m also really tired, but I feel like this is a good way to end,” Sng said. “I still have like a month of regular work, but in terms of big projects, this is like my coup de grace.”

Social Programming Board declined to comment at the time of publication.