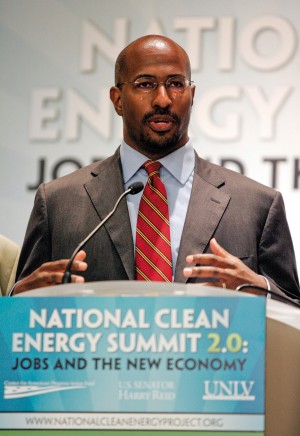 Van Jones speaks at the National Clean Energy Summit in 2009. Green Action’s appeal for a roundtable discussion with Van Jones, the former Special Advisor for Green Jobs in the Obama administration, was denied, however the appeal for his speech was approved over the summer.

A Green Action appeal aiming to provide St. Louis with a working plan for a green-jobs economy was shot down by the Student Union Treasury on Tuesday, Nov. 2.

The vote against the environmental-advocacy group was 11-7, with no abstentions.

Green Action had already been allocated $5,000 over the summer to get environmentalist Van Jones to speak at the University on Nov. 30, the maximum allowed for summer appeals. The student group appealed for an additional $2,500 to host a roundtable discussion with Jones to establish a plan for creating eco-friendly jobs around St. Louis.

Jones was listed among Time’s 100 Most Influential People in 2009 and is a distinguished visiting fellow at Princeton’s Woodrow Wilson School of Public and International Affairs. He is a senior policy adviser at Green For All, the non-governmental organization he established in 2007. He was appointed special advisor for green jobs in the Obama administration in early 2009, before his previous political ties entangled him in controversy and forced his resignation.

According to senior Jasmine Berg, a Treasury representative and the chair of the Budget Committee, Green Action was effectively trying to bypass Treasury procedure by appealing twice for related events.

Junior Arielle Klagsbrun, the president of Green Action, claimed that the difficulty was due to misunderstanding and a lack of transparency of the executive appeals account.

“His honorarium for the Assembly Series actually cost $20,000,” Klagsbrun said. “The speech was only $5,000 because we were able to call in a personal favor.”

The roundtable would have partially compensated Van Jones, while also providing an opportunity to extend discussion.

The roundtable would have been composed of 25 people, including leaders from the St. Louis area and student representatives. Its venue, however, led many Treasury members to question whether the event was actually focused on undergraduates.

“It was [to be] at 10:00 a.m., when most people have class, in the law school,” Berg said. “It was mostly inaccessible to undergraduates, whose money would be funding the event.”

Treasury tries to make its decisions based on how much the appeals provide unique benefits to undergraduate students. This is allegedly where Green Action’s appeal fell short.

“One of the difficult decisions in Treasury is considering tradeoffs, and people felt that maybe the $2,500 would be better spent on new endeavors,” said David Cohen, speaker of the Treasury. “People felt like the timing and the location weren’t necessarily geared toward undergraduate students, but towards the law school.”

The rejection comes as the latest of many recent appeals Treasury has denied. An appeal from the Society of Women Engineers requesting money to fly 15 people to a conference in Orlando was denied just before the Green Action appeal. Treasury’s main protest was that it provided personal benefits instead of serving the undergraduate community as a whole.

“We want to be enabling in a sense that benefits as many people on campus as possible,” Berg said. “Sending people to networking conferences is a personal benefit that they should be paying for with their own money.”

But according to Cohen, the number of rejections is not atypical.

“We’re on target in terms of how much money we’re spending,” Cohen said. “In terms of denying appeals entirely, it’s probably about the same or a little less than in years past.”

The rejection is not so easily dismissed by Green Action, which had hoped that Treasury would take into view how the roundtable plan could benefit the larger community. According to Klagsbrun, the rejection of the roundtable discussion is truly disappointing.

“A one-hour speech is great, but the point of the roundtable was to provide a time period for students and community members to interact with [Jones],” Klagsbrun said. “I’m upset that we’re not going to have it.”

Green Action is hoping to take full advantage of the short question-and-answer session following Jones’ speech, which will center on the importance of developing environmentally friendly energy in order to stimulate the national economy.