Miller to resign as VP administration 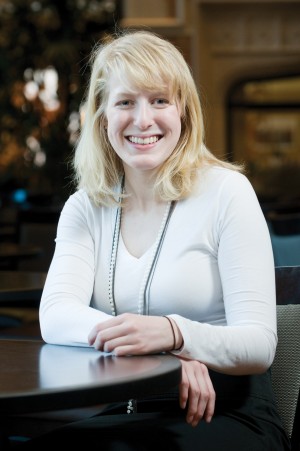 Courtesy of Open
On Tuesday, junior Kirsten Miller announced plans to resign from her position as Student Union’s vice president of administration because she will be spending next semester abroad.

Miller’s resignation will take effect Nov. 21 in order to allow a smooth transition for her successor.

Though Miller says that her decision was tough, she cites the progress made by the Student Union executive board in the past eight months as part of her rationale for going abroad.

Miller said that the progress made by the Student Union executive board in the past eight months helped her rationalize her tough decision.

“I wouldn’t have felt comfortable leaving an administration that I didn’t feel was doing its job,” she said.

Miller, along with Morgan DeBaun, Cody Katz, John Harrison York and Eliot Walker, was elected as part of the [open] slate last spring. Among her primary accomplishments while in office are making election software run more smoothly and revamping the Women’s Building as a space for student groups.

The vice president of administration is responsible for managing SU internally, acting as parliamentarian and overseeing recruitment and retention.

Miller, along with the other members of Student Union executive board, will choose a new VP of administration through an internal process that will begin this week. An application will be online Wednesday, and Miller’s successor will be announced in mid-November.

Student Union president Morgan DeBaun expects that three or four students will apply for the position.

Miller, a junior Economics and Strategy major in Olin, will spend the spring in London at City University. She plans to take classes in the Cass School of Business and hopes to intern with a government agency while there.

“I’ve always wanted to go abroad, and one of the reasons I chose Wash. U. was because of the abroad program,” Miller said.

Miller is not the first VP administration to resign in recent memory. Last year, Trevor Mattea resigned from the same position, citing dissatisfaction with his role in the administration.

Miller expects that the transition will be easy thanks to premeditated organization and planning.

“The majority of the work was frontloaded over the summer, knowing that there was the potential that I would be accepted into this program,” Miller said.