Service First, Washington University’s day-long freshman community service program, will be discontinued for future students due to logistical challenges, according to the Community Service Office. 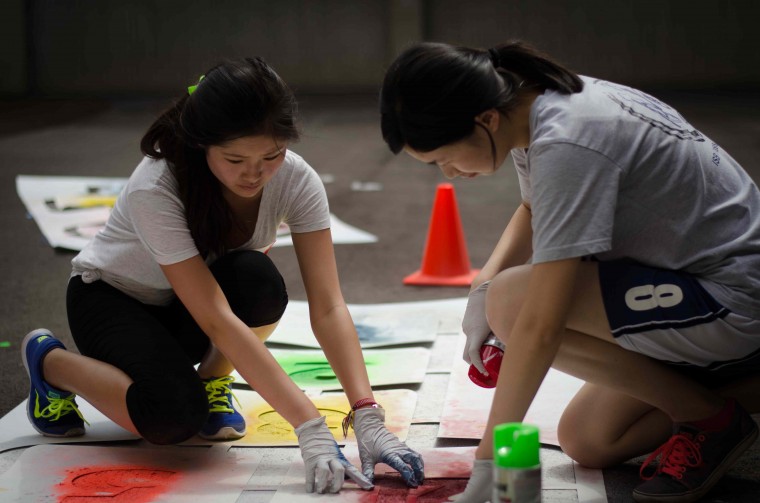 Two freshmen work together to spray-paint hopscotch numbers on the playground at the KIPP Victory Academy Elementary School in St. Louis. Approximately 50 percent of the class of 2018 participated in a variety of community service activites at local schools as part of the Service First program on Saturday, Aug. 30.

In its 16th and final year, Service First suffered from delays and limited spots for freshmen, which resulted in some groups of students arriving back on campus hours after their expected return time.

The CSO plans to replace Service First with a series of smaller events intended to allow freshmen to better connect with the St. Louis community.

Stephanie Kurtzman, director of the Community Service Office, said that although the CSO felt Service First served an important purpose for freshmen, it also had many limitations. These limitations included the budget, the amount of staff time needed throughout the year to plan the event and the logistical complications of transporting hundreds of students to various locations.

The new plans will comprise a series of half-day events involving smaller groups. According to Kurtzman, these will introduce students to communities and local issues to create a more concentrated and meaningful experience for both the students and those they are serving.

“It’s very much a sketch right now,” she said, “but it would be more a collection of opportunities students can sign on for that might be for 10-25 people.”

Although the structure of the programs has not yet been determined, Kurtzman mentioned that various clubs and service organizations could sponsor events that pertain to their cause. Dance Marathon, for example, could sponsor a trip to the St. Louis Children’s Hospital.

“I like working with people more,” freshman Madeline Krips, who attended Service First this year, said. She added that she liked the idea behind the new format because of the opportunity to actually work with the beneficiaries of her service.

Kurtzman expressed other concerns with Service First, including a lack of interaction with people from the community in such a large group and the decreased opportunities for learning and reflection, which she believes will be resolved by next fall.

In previous years, the event was open to all freshmen, with approximately 70 to 75 percent choosing to participate. This year, sign-ups were limited, allowing only 50 percent of the freshman class to get involved. Kurtzman said this was a result of school closures and principal changes, which restricted the number of participating schools to 10 instead of the usual 12 or 13.

Service First was traditionally a part of the First 40 slate of events sponsored by the First Year Center. However, FYC Assistant Director Katharine Pei said that sign-ups were restricted to ensure that all students had a positive experience volunteering.

“[The Community Service Office] wanted to ensure that all of the students who did participate got a really exciting and engaging opportunity and not just shove all of [the freshmen] in a school site that can’t hold that capacity and not have enough to fulfill [their] time there,” Pei said.

In addition to the reduced number of destinations, a University City school’s last-minute cancellation—due to concerns about weather disrupting the predominantly outdoor projects—created some delays for a few groups. Despite the confusion, all the students were able to leave campus as planned.