Protesters from around the St. Louis community participated in a rally at the Missouri History Museum on Thursday to express their opposition to the museum’s decision to cancel an event intended to discuss the similarities between the social movements in Ferguson, Ayotzinapa and Palestine. 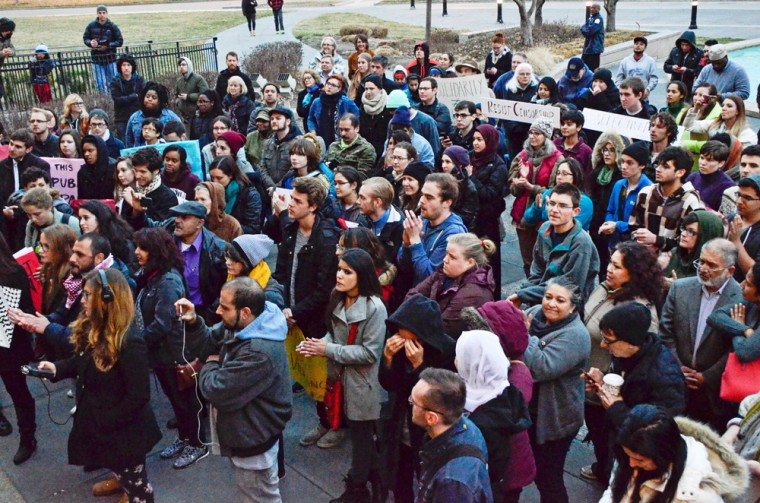 A group of around 75 protesters stands outside the Missouri History Museum on Thursday night after the venue canceled a panel discussion intended to compare social movements in Ferguson, Ayotzinapa and Palestine. Students organizers from the campus group AltaVoz denounced the cancellation as an instance of silencing conversation.

The panel featuring speakers from Washington University student group AltaVoz, Latinos en Axion STL, the Organization for Black Struggle and the Saint Louis Palestinian Solidarity Committee had been scheduled since February. The museum backed out on March 17, though, claiming that the panel had been “significantly change[d]” since its initial proposal, which hadn’t included Palestine as a topic of discussion, and that the new format would not best address the complexities of the issue.

Event organizers argued that the museum had posted flyers and showed recognition of the addition before last week, and they decided to call off the panel rather than remove the Palestinian activists from the set of speakers, as the museum had demanded.

Instead of the intended panel discussion on Thursday, planners organized a rally outside the museum. Under the #SelectiveHistory banner, which protesters of the museum’s decision used on social media last week, a wide variety of around 75 attendees showed up to the changed event, which still included speakers from the four groups.

Supporters included Washington University students and faculty, members of the groups attempting to host the event and multiple people holding signs stating Jewish support for the rally. However, there were also three students holding an Israeli flag who said they were protesting the comparison of the events in Palestine with those in Ferguson.

Freshman Paul Felder, sophomore Melanie Borker and an unnamed student visiting from Hamilton College in New York held the Israeli flag on the opposing sidewalk as the protest proceeded.

“We’re Wash. U. students who support Israel and of course support free speech, and we believe Israel and America uphold the values of free speech, but we don’t agree with the comparison between Ferguson and Palestine. It’s a more complex issue than that,” Felder said.

In a published statement, the four groups that organized the event wrote, “We, the undersigned, condemn this silencing of part of our community and this brazen attempt to divide communities of color. Instead of talking about solidarity, we find ourselves actualizing solidarity by rejecting the Missouri History Museum’s demands. We stand by our Palestinian partners and are postponing the original panel until an alternative location can be confirmed.”

Community members stand with signs as part of Thursday night’s protest outside the Missouri History Museum. Organizers planned the protest for the same time as the cancelled panel discussion would have been held.

Bret Gustafson, one of the original planned speakers and an associate professor of anthropology at the University, spoke about the decision’s impact on private influence over public institutions. “[The Missouri History Museum] gave us more evidence that we are right and we are in the right,” Gustafson said. “By censoring this event, the museum, its donors, boards and masters have shown how government has become corrupted by private interest.”

“Thank you Missouri History Museum for teaching us a lesson,” he added. “Not about history or knowledge, but about how public institutions are degraded by private interests.”

Junior Annie Pudvah was already planning to attend the original panel but felt it became more important to come when the museum decided not to host the event. Her sign, which stated, “This is public space,” intended to call the museum out for censoring speech in a public area.

“When I heard that they were canceling the panel, I thought it was even more important to come out to voice the fact that we know this is wrong, and we can still be united even if we don’t attend a panel,” Pudvah said.

She also said she believed that comparing the various situations would be helpful in making progress toward social justice and unifying people of different races and backgrounds.

“I think obviously there are differences on each one, but it only makes us weaker to divide them and I think we’re stronger if we find the similarities instead of focus[ing] on the differences between the events,” Pudvah said.

Senior Cody Henson said he was astounded when the museum decided not to hold the event.

“The irony of a history museum shutting down an open dialogue is absurd,” Henson said. “Objectively, Palestinians are being brutalized. They lived in ghettos; they live in slums. It’s not hard to see the parallels between that and Ferguson. I know it’s not exactly the same, but I don’t see the controversy, to be honest.”

At the protest, various attendees held both signs mentioning Jewish support of Palestine and, across the street, an Israeli flag. The museum said it would be open to a later discussion about the Israel-Palestine conflict.

Ismail Siam, a second-year Brown School of Social Work student originally from Palestine, was one of the members of the Saint Louis Palestinian Solidarity Committee who helped plan the event. He believed that the decision to cancel due to the inclusion of Palestinian topics was uncalled for, given the circumstances surrounding the three areas that were part of the intended discussion.

“I think [the events of Ferguson, Palestine and Ayotzinapa] are happening in different contexts, but there are parallels among all of them. The issue is, [the museum] didn’t allow us to even hear these parallels. They didn’t give us the freedom to even express these parallels,” Siam said.

He also noted how the diversity of people at the demonstration added to meaning of the event.

“I think honestly, one of the great things is you see people of different colors, from different religions, different ethnicities, speaking different languages, but they are all here for the same purpose,” Siam said. “I think this is where the parallels come from.”

On Friday afternoon, a smaller group of around 20 protesters, including members of AltaVoz and the organization St. Louis Jewish Voice for Peace, which endorses elements of Boycott, Divestment and Sanctions against Israel, demanded the release of museum emails pertaining to the event’s cancellation. Museum leaders are expected to deliver a response to the request on Monday.