An event planned for Thursday night has been cancelled at the Missouri History Museum after organizers refused to meet the museum’s demand that Palestinian activists be removed from a panel of speakers exploring the similarities between social movements in Ferguson, Ayotzinapa and Palestine. 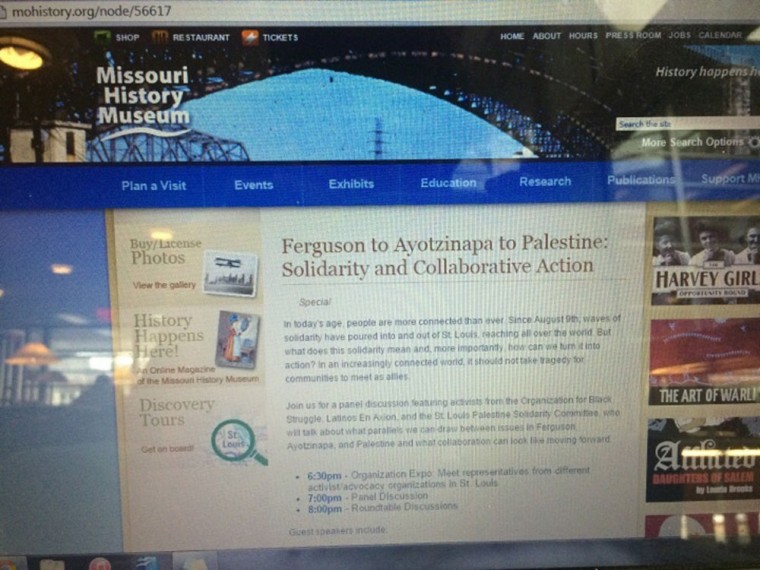 The Missouri History Museum has cancelled a solidarity event claiming that its planned format was changed from the initial pitch. The museum advertised the panel with its full title and information, each including references to Palestine, on its website before the event page was taken down on Wednesday afternoon.

Co-hosted by Washington University student group AltaVoz, Latinos en Axion STL, the Organization for Black Struggle and the Saint Louis Palestinian Solidarity Committee, the “Ferguson to Ayotzinapa to Palestine: Solidarity and Collaborative Action” event was intended to draw from across St. Louis. Planned panelists included leaders of the various hosting organizations, as well as University professor Bret Gustafson and community leader and alumna Brittany Packnett, a member of the Ferguson Commission.

In a public statement released Wednesday afternoon, the museum claimed that the event was cancelled because it had “significantly change[d]” from its initial format as presented in an email from organizing AltaVoz member senior Sourik Beltran.

Beltran said that he received a call from a representative of the museum on Tuesday explaining that the event would be canceled unless the Palestinian activist panelists were removed.

But Beltran said that while Palestine had not been mentioned in his initial communication with the museum, the inclusion of Palestine in the event was made clear in subsequent exchanges and on promotional materials posted to the museum’s website.

“We were really confused—the first question was why? Basically, their answer was ‘we didn’t know Palestine was going to be part of the event,’ referring to a very old email from January when we didn’t know which topics we were going to cover—we just didn’t include Palestine in the email. But every email after that included Palestine,” he said.

An email dated March 4 sent from an organizer at the museum to Beltran read, “I love the flier. See you on the 19th,” with the attached image linking to a flyer with the event’s full name. A page promoting the event on the museum’s website also included the event’s full name and information on the panelists, which contained references to Palestine and the Saint Louis Palestine Solidarity Committee, respectively. As of Wednesday afternoon, that page had been taken down, with the URL directing users to a “page not found” notice.

“The funny thing is if you look at their calendar, there’s an event that was cancelled but not removed. So our event was just sort of totally erased,” Beltran added.

In an update to its statement posted around 5 p.m. on Wednesday, the museum acknowledged, “We were initially open to the changes and posted information about the program on our website. However, after much consideration we decided the complexities of this issue could not be adequately addressed in this format.”

Museum spokesperson Leigh Walters, the assistant director of communications, stressed that the decision was made by the museum’s staff without any outside pressure from donors or other individuals or groups to do so.

Walters explained that because of the leadership team’s experience working with such issues, it felt that the planned panel was not the best format.

“We actually function as a national model for programming to discuss difficult issues like this. We are the professionals and the experts on how to best do these things…we would be open to discussions about Palestine and the Middle East separately but not within this format,” Walters said.

Walters disagreed with the notion that the museum was attempting to silence discussion of the topic with its decision, instead emphasizing its support of conversation and difficult issues in the past.

“That’s not what we’re about and what we’ve ever been about, and we are willing to discuss with them another format to discuss this issue…but from our perspective, they have never been open to that, so it kind of goes both ways here,” she said.

But Beltran said that the motivation behind combining the three groups in one event was their similarities.

Specifically regarding Palestine, he said, “Palestine Solidarity Committee has been organizing in St. Louis for a while to bring light to issues, human rights abuses of Palestinians. With that alone, we wanted to draw parallels between the kind of work these groups are doing.”

Beltran also expressed confusion with the museum’s decision so close to the event.

“Our contact with the history museum was very supportive, like I said, from the beginning. It was a good relationship…they were very much on board with the message—at least, in the beginning,” he said.

Organizers said that they still plan to have attendees meet outside the museum on Thursday night to support the Palestine Solidarity Committee and that they are considering new venues to host the panel.

As the news of the event’s cancellation emerged on Wednesday afternoon, respondents took to social media to voice their frustration. Around 100 messages with the marker #selectivehistory appeared on Twitter, reflecting the hashtag that was added to the group’s flyer for the panel-turned-protest.

Several posts on Twitter and Facebook drew a connection between this event’s cancellation and the change to a speaker event on the University campus last April. Then, the International and Area Studies department altered a planned appearance from Palestinian-American slam poet Remi Kanazi as part of a panel to discuss Boycott, Divestment and Sanctions, a movement founded in Palestine that intends to combat Israeli presence in contested land with economic sanctions.

Instead, due to departmental concerns that the panel would not be balanced, only Kanazi was allowed to speak only about his poetry, not politics. Moreover, only members of the International Area Studies honorary Sigma Iota Rho were allowed to attend.

“You can’t be fully educated about something unless you know all perspectives. So that’s why especially in academia and then in an event that was going to be educational and kind of look at the similarities between all of those different cases that we’re seeing, it would have been really, really amazing to have a perspective that we don’t often get to hear,” sophomore Shivani Desai said.

“In our Wash. U. community, these are two events that we can say for sure where the Palestinian voice was being silenced to a certain degree, and that makes you really upset,” sophomore Yaala Muller said.

“A lot of people were saying that they struggle with comparing Ferguson to Palestine and I struggle with comparing Ferguson to Palestine, but I think the event was a lot more about coming together and about solidarity…I understand that it’s really scary for a lot of people, but I think having the conversation is really the only way to move forward,” Muller added.