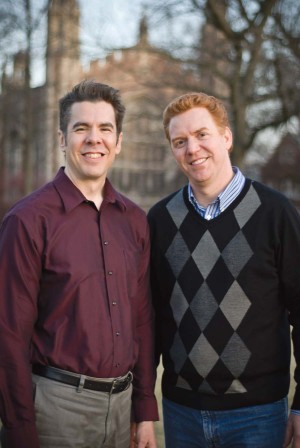 Charlie Robin, the executive director of Edison Theatre and the 560 Music Building (right) and his partner, Al Fischer. Fischer was terminated from his position as a Catholic school music teacher due to the couple’s plans to marry in New York later this month.

Al Fischer, a music teacher at St. Ann Catholic School and partner of Charlie Robin, the executive director of Washington University’s Edison Theatre, was fired Feb. 17 after the couple’s plans to get married in New York were overhead by a representative of the St. Louis Archdiocese.

Though the couple has kept their lifestyle no secret from the community, getting married went too far against what Robin characterized as a “don’t ask, don’t tell” policy.

The marriage goes against the Christian Witness Statement every St. Ann’s employee signs, that says that the educator will “not take a public position contrary to the Catholic Church” and will “demonstrate a public life consistent with the teachings of the Catholic Church.”

The school originally planned to fire Fischer on Mar. 9, 2012, the day of his wedding. But when he posted on Facebook about the plans for termination, parents complained to the school about his firing. Despite this protest, he was fired the next day, without being given a chance to say good-bye to his students.

Administrators at the St. Ann Catholic School declined to comment, although the Archdiocese of St. Louis sent a statement supporting the firing.

“The Archdiocese of St. Louis fully supports the action taken at St. Ann parish school as it is in full compliance with the Christian Witness Statement signed by every educator in the Catholic school system,” the written statement said.

Robin and Fischer both grew up Catholic. They share a passion for music and the performing arts. While Robin, a Washington University alumnus, is responsible for fostering the arts on campus by developing the annual schedule of shows at the theatre, Fischer is a professional musician and serves as artistic director for the Gateway’s Men’s Chorus.

Fischer was also employed as an organist and choral director at the Catholic school, but the Catholic Archdiocese of St. Louis instructed the pastor and principal to fire him upon learning of his plans to marry.

In a letter to parents, Fischer emphasized that he did not blame the school for his firing.

“I think the word has been well spread that this is not the fault of St. Ann School or it’s leadership, and I want to emphasize that I get that, too. [School administrators] are still there for me in a big way. I ask that you help them keep their focus on the things that are important: the business of running a school, supporting your kids, and (sadly) finding a music teacher,” he wrote in the letter. “Social justice is an area of vital importance to the Catholic Church, and they do great work in this area. A family conversation about whether or not justice was served here could be a great thing. I do not want the lesson from this for the kids to be, ‘Keep your mouth shut, hide who you are or what you think if it will get you in trouble.’ In a just world, uncomfortable truths need to be stated.”

Robin feels the Church takes action by threatening job security rather than acting on moral principals of equality and human rights.

“Al is a damn good teacher and much loved by his students, and it’s the students that lose out the most here,” he said.

With additional reporting by Michelle Merlin.