Construction on Chicago to St. Louis high-speed rail in progress, to finish by 2014 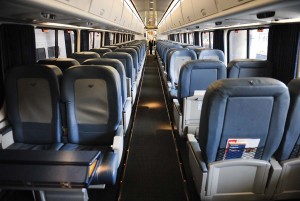 An inside Acela Express car is seen Washington, D.C., July 11, 2011. Amtrak has struggled for survival nearly every year since its first trains rolled out on May 1, 1971.

A new high-speed train connecting St. Louis and Chicago will provide students with an alternative way to travel.

The railroad, which is currently under construction, should be complete sometime in 2014, according to officials involved in the project.

Planners said the project is especially significant for Washington University students, as a large portion of them call Chicago and its surrounding areas home.

They hope the train, which should travel at a maximum of 110 miles per hour, will help promote cooperation between the two cities.

In January of the following year, Illinois was chosen as one of the states that would benefit from the project, and was allocated $1.2 billion in federal funding to introduce high-speed rail service by 2014.

Students have been a focus of the planning process.

“Students are the one of the important markets we want to reach with this project,” said Miriam Gutierrez, section chief of Rail Program Planning at the Illinois Department of Transportation. “This generation is big on trains, and there will be Amtrak student discounts.”

Gutierrez said that the project managers are currently working out ticket prices that are reasonable but will still help pay for new features the trains will offer passengers, such as Wi-Fi access and improved food services.

“Right now we’re trying to figure out how much we can raise ticket prices so that we won’t lose ridership,” Gutierrez said. “But they won’t go up super high, just because it’s so easy to jump on a plane instead.”

Washington University students who live in the Chicago area are currently faced with the decision between a 60-minute flight and a 5 1/2 hour train ride.

Sophomore Neha Nair said the high-speed rail will make traveling between school and home easier for her.

“I would definitely use the train for busy times like Thanksgiving” Nair said. “In order to get a reasonably priced flight, you have to book it really far in advance, which can be difficult to do early in the semester.”

“If I didn’t have my car and the tickets were cheap enough, I’d definitely take the train, especially since I’d be able to avoid the airport hassle” junior Claire Chaney said.

Gutierrez added that the project managers have to take the environmental impacts of the construction into account. The Illinois Department of Transportation worked with the Federal Railroad Administration to submit an Environmental Impact Statement for the project. Public meetings will be held over the remainder of the year to review the environmental clearance document and ensure that it will be environmentally safe to build a second railroad track through the St. Louis-Chicago corridor.