Vice President Joe Biden campaigned on behalf of Democrat Jason Kander’s run for United States Senate at the Pageant on the Delmar Loop this past Friday.

Kander, a veteran Army National Guard captain who fought in Afghanistan, became the first millennial elected to a statewide office as Secretary of State of Missouri in 2012 and received national attention for his pro-background checks campaign ad in which he assembled an AR-15 rifle while blindfolded. 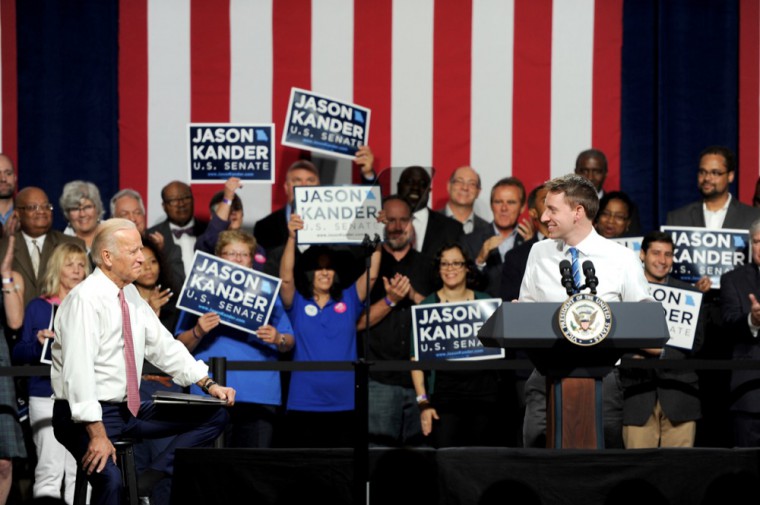 Vice President Joe Biden, left, and Secretary of State of Missouri Jason Kander interact during a campaign stop at the Pageant. Biden praised Kander’s leadership and potential for bettering Washington on Friday.

For most Washington University students, this will be their first time they are eligible to vote in a presidential election and many voiced eagerness to participate in the democratic process beyond just the presidential race.

“I think it’s an important Senate race not only nationally because it determines the future of the Senate, but I think it also has a huge effect in Missouri. I think Kander’s a great leader,” senior Mike Holtz, former president of Washington University College Democrats and a former White House intern, said.

Current president of the College Democrats and senior Jimmy Loomis emphasized the importance of multiple races appearing on the Missouri ballot this year.

“I would hope that every Washington University student takes this moment to appreciate the political climate in Missouri and around the state because I don’t think—at least for another eight years—you’re going to have Missouri matter as much as it does now on a national, state and local level, with the caliber and closeness of the races we see for Senate, for governor, and to some extent, for president,” Loomis said.

Some Washington University students in attendance expressed their excitement about voting in Missouri, rather than in their home states, and for Kander.

“If you’re a student, you spend your life here and are affected by the policies,” Holtz said. “Missouri is more competitive than Connecticut.”

Like Holtz, sophomore Noah Silverman will be voting in Missouri rather than his native Illinois.

“I felt my vote mattered more for Kander,” Silverman said.

“He’s really forgotten what it’s like to be a Missourian. He’s left behind fighting for Missourians. Jason really thinks he can bring that change to Washington,” Chris Hayden, Kander’s communications director, said.

Hayden believes the Kander people see in advertisements and at rallies is the true Kander.

Hayden was also not surprised about Biden’s support of Kander, noting the similarities between the aspiring senator and vice president.

“They’re just two people who have made their careers fighting for the middle class families, so it makes sense [Biden would] be here to help Jason,” Hayden said.

Holtz said he believed the crowd of around 2,000 was not just because any vice president was speaking, but was specifically because of Biden.

“Especially for students, he’s taking [up] a lot of campus issues, including sexual assault,” Holtz said.

Loomis felt that the large turnout was indicative of the overall national interest in the race, particularly because of its potential to impact which party controls the Senate.

“I think it really just goes to show how important this Senate race is in determining the control of the Senate, that Vice President Biden is turning out to make the case for Jason Kander for all of Missouri,” Loomis said.

Washington University students registered to vote in their own home states were still drawn to the event. David Flasterstein and Michael Yee, both juniors, were excited to attend the event, despite being registered in their home states of Florida and California, respectively. Flasterstein guessed that the two waited in line for about two hours.

“It’s amazing that we as just citizens of this country have the chance to go to these events and meet the people who are running the show at the state level, and, at this case, at the federal level,” Yee said. “The fact that, of the hundreds of millions of citizens of the U.S., that we have this kind of access, is incredible.”