Washington University is taking a neutral stance on political matters regarding the debate and the upcoming election. As an institution of higher education, neutrality is something the University pursues in any election year, but this year—as the host of the second presidential debate—that’s becoming even more important. 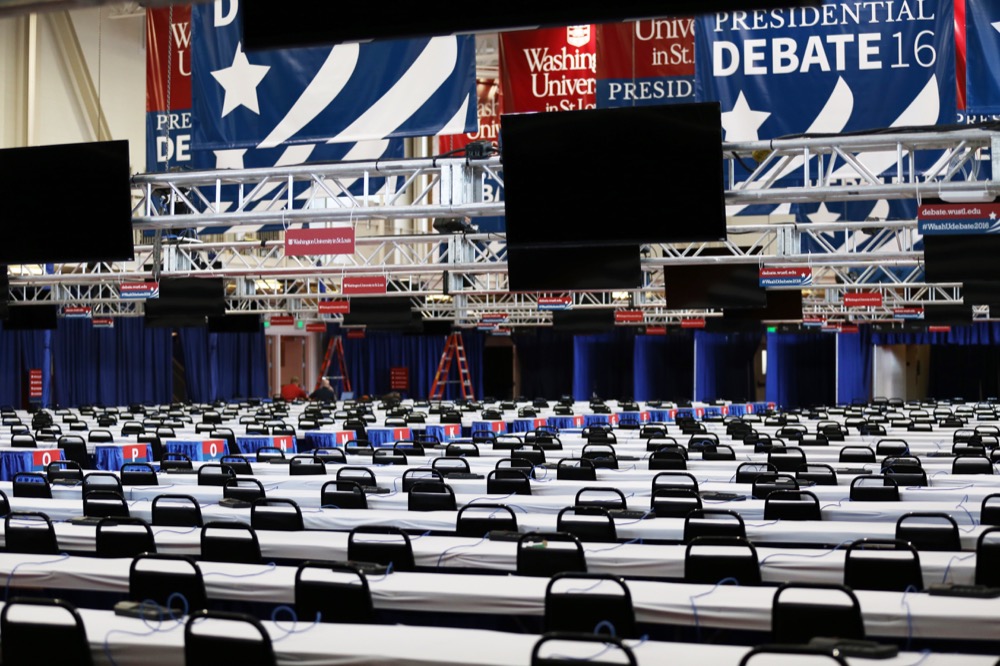 Chairs are set up for over 500 media members for the presidential debate on Sunday night.

The University, however, is not the only body taking this stance. Student Union is also choosing to remain neutral—a choice some students are feeling the repercussions of.

Junior Keaton Schifer, who chairs the Student Group Funding Team under the Student Engagement Subcommittee of the Presidential Debate Steering Committee, said that policies enacted by the University restricted which student-led debate-related programming efforts were funded by the $100,000 set aside by Student Union and the University.

“Since it’s University money—and even something like SU money is still technically University money—we have to abide by all the University’s policies,” Schifer said. “If everyone is on the same understanding in terms of political policies and campaigning, we can make sure that we’re not favoring a certain candidate or a certain political party.”

Schifer is referring to policies the University outlined through its “Guidance on Political, Campaign and Lobbying Activity” document, which is something it has stuck to since the beginning of the election season. According to the document, University resources cannot be used to “suggest University endorsement of or support for a political candidate or political party, nor can they be used in to engage in unapproved lobbying activities.”

Essentially, this means that no campaigning for a specific candidate can be done while using University resources, which can range from SU funding to using a University space. These policies are also nothing new, according to Associate Vice Chancellor Steve Givens—the chair of the presidential debate steering committee. The policies do allow non-partisan educational events or voter registration activities.

But for some students—like senior and president of the College Democrats Jimmy Loomis—the rules present what he called a “free speech issue.”

“When you think about it, if Hillary Clinton were to come to campus, that would really do something for the profile of the University and it’s a shame that these rules are prohibiting that,” Loomis said.

And that—the profile of the University—is a theme many are considering following student complaints that the debate causes more inconveniences for students than direct benefits.

Givens stressed a similar point—the school hosts the debate to benefits its students.

SU is still encouraging students to get involved by funding a number of events and activities through a variety of different student groups. Some of the events SU has funded in order to help students get involved in University-approved ways have included funding programs like Spoon University’s debate week, debate watch parties in Tisch Commons and the Light Up Brookings event held last weekend.

“I think our job here is to empower students to be future leaders,” SU President Kenneth Sng said. “We have to follow the political guidelines, but we allow students to have protests on campus, we actively provide a platform for students to share issues and these issues—some of their opinions—are going to slide one way or the other, but I think the experience allows those students to grow both as a person and professionally in terms of what they want to do in the future.”

Sng added that these guidelines are in line with their ultimate goal: allowing SU to stay neutral while still empowering students to advocate for certain issues.

The College Democrats and the College Republicans are two SU student groups getting particularly involved—to no surprise. The groups hosted their semi annual Campus Crossfire debate last week where they discussed issues of domestic and foreign policy. The groups will also cosponsor two debate watch parties with SU on Sunday—one in Edison Theatre and another in Tisch Commons.

However, what may be most notable from the groups in this year’s election cycle comes at the hands of the College Republicans, who have decided to publicly not endorse Trump. The non-endorsement came in early September in the form of a sign at the Activities Fair.

Ruben Schuckit, a junior and president of the College Republicans, said he thinks a Trump presidency would be symbolically dangerous, but the reality that it may come true has become more possible as the election season has progressed.

Loomis said he thinks—as a result of the non-endorsement given this election season—the College Republicans will be getting a lot more press than the Democrats. He called the non-endorsement a “responsible move that reflects the non-partisan dissatisfaction and concern with [their] candidate’s candidacy.”

“It’s not just Democrats who criticized his vision [for] the country, it’s Republicans too,” Loomis continued.

However, as the day of the debate approaches, many students, faculty members and administrators have noted a piqued interest from the student body.

Associate Professor Andrew Reeves, who teaches the introductory American Politics class, said he’s definitely noticed students being more involved and engaged. He said students frequent his office to talk politics and that enrollment for his class is up to around 200 students. The debate, he said, could be playing a role.

“It’s nice for me too to sort of get a sense of what people are thinking around campus,” he said. “I can’t really separate out how much more the debate adds, but usually during an election year people get more excited and engaged.”

Sng said that’s been the goal all along—to engage all students, even if they’re not typically politically engaged and creating a memorable experience for the large number of students who will be voting for the first time.

“The fact that the first time you’re voting in a presidential debate you come so close to the action—I think that experience will leave you politically engaged for many, many years to come,” Sng said.

As for Sng—on the day of the debate while his own organization is hosting a number of watch parties and events, including the afternoon’s flagship DebateFair program, he’ll be inside the debate hall. Sng will give a one minute introduction welcoming the audience and—if all goes as planned like it has in past years—will be meeting the candidates separately and presenting them with a souvenir from the University.

“I feel the weight of the responsibility…I feel like I have to make it count for the student body,” Sng said. “It’s one of those things that after the event, as time goes by, it slowly sinks into you the gravity of what just happened.”