As Washington University gears up to host the Oct. 9 presidential debate, students have mixed feelings about the impact of having a debate on campus.

The debate, which some are predicting may cost the University up to $5 million, will close multiple roads, buildings and parking lots and temporarily evict students from fraternity housing on Upper Row. 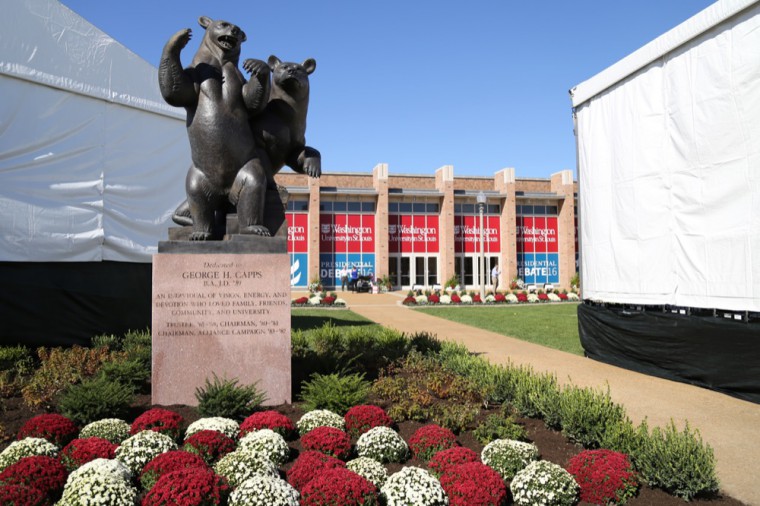 The Wash. U. bear statue stands among media tents outside the Athletic Center which will host the second presidential debate this weekend.

Students, the vast majority of whom will not be able to attend the debate itself, acknowledged the heightened publicity the debate’s media coverage will bring to campus, but disagreed on the net benefit of that publicity.

Last semester, Student Union allocated $75,000 of its budget toward programming for the debate, which came at the expense of Social Programming Board’s budget. As a result of scheduling and finances, popular events such as fall WILD were canceled this semester. However, a survey conducted by Student Life last month found that over 60 percent of students polled stated they would prefer to have fall WILD over the debate.

Some students consider the debate a major inconvenience. Others fear that hosting has opened up campus as a platform—or a battleground—for additional political and social tensions.

Many students noted that they have enjoyed the political atmosphere surrounding the upcoming debate, and some students feel that it has enhanced campus discourse surrounding election issues. Still, some question how the debate benefits individual Washington University students, particularly given the price tag of hosting the debate.

“I think we’ve created great conversations; [the debate] makes politics feel more relevant and personal. But part of me thinks student involvement could have been better—I don’t know anyone who has a ticket and it’s not clear they even have tickets for students. We’re paying for this. Tuition is outrageous already, and it seems like a scam,” senior Rachael Spalding said.

“I don’t know if I’d put the debate into a good-bad binary. Certainly it’s bringing up conversations that need to be had on campus…but at the same time, it costs a lot of money, and it seems as if campus is being taken over. I don’t really feel like a student right now. I can’t really access the services here, but these other people can,” senior Ahmet Yucesoy added.

Junior Andreas Larsen questioned whether the University will really be the center of national media attention—and whether the inconvenience for students, particularly those who live on Upper Row, is worth it.

“I’m sure for people on upper [fraternity] row, who have to move out and always show ID, it’s been a huge inconvenience. Yeah, it’s about getting Wash. U.’s name out there, but you don’t really hear about all the other schools they do the debates at. I don’t think it’s good publicity right now, but Wash. U. will use it in the future and say ‘we’ve had this many debates,’” Larsen said.

Sophomore Jadine Sonoda said she considers the inconveniences to be well worth the connection to the broader political atmosphere that the debate provides.

“I’m excited about the debate. I think a lot of people are upset about inconveniences, but I think it’s cool to be involved in something that people are interested in all over the world,” Sonada said.

Still, other students do believe that the University—which has hosted four previous presidential debates—can increase its standing by hosting this debate. According to Student Life’s recent survey, some freshmen even chose to apply to Washington University after learning the school would host the debate—and other students chose not to go abroad this fall.

Freshman David Lee said he views the debate as a symbol of the quality of the University.

“I think it puts Wash. U. on the map. Even though the spotlight will be on Trump and Clinton, overall it can only be a good thing for our school; it can also showcase what our school has to offer and how good of a school we are,” Lee said.

According to Student Life’s survey, around 90 percent of students are planning to come to the Danforth Campus during the event, even though only a small fraction of the student body has a chance of attending the actual debate. Winners of the student lottery are still awaiting word on whether they will receive tickets, but 500 students received emails informing them of their lottery spots last week.

Junior Tom Howe said he has enjoyed the debate’s energy, but also questions its value.

“It’s good publicity for the school, and I do think the energy added kind of makes up for the inconvenience, but it’s going to end up being just a fact for tour guides,” Howe said.

Junior Maya Strod said she feels it will be a day to remember, regardless of whether or not she can attend.

“It will be really cool to tell the generations to come that I was there when this debate was going on, even if I wasn’t in the same room. It’s a once in a lifetime experience,” Strod said.

Other students, like junior Mimi Borders, are concerned about the negativity and potential violence that the debate’s public attention could bring, especially given the irregularity of this election cycle.

“More than any other presidential election, the rhetoric has been really violent, and so we can’t compare it to anything else in the past. Having someone with such violent rhetoric on this campus—I’m not scared for Trump, I’m scared for the fact that his supporters on and off campus will feel emboldened towards destructive actions,” Borders said.

Senior Elaine Emmerich said she regrets the University’s role as a platform for either party to propagate their ideas.

“I feel uncomfortable that we’re providing a public platform for these [candidates], both of them, who have said and done things in the past that are extremely vile towards people on our campus,” Emmerich said.

A total of 7.86 percent of students polled stated they would be protesting on the day of the debate—and Emmerich fears the worst regarding potential clashes between debate security and students.

“I know a lot of people who feel unsafe with the amount of security and law enforcement—it makes our campus a less safe space, ironically. It feels extralegal, with the secret service—what do they have the capacity to do?” Emmerich said. “It’s a great symbol of the way Wash. U. treats it’s students; it’s an opportunistic way to get publicity without looking at the real impacts of the election, the debate or the candidates on student well-being.”

But, to truly judge the benefits of hosting the debate, Associate Vice Chancellor Steve Givens, who is also chairing the presidential debate steering committee, urged students to wait until the debate is over.

“I would just ask [students] to wait until the end of the week and weigh the whole thing—to look at what their experience was like, did they learn anything, did they have fun, do they feel proud of the university—all those things,” Givens said. “If they don’t agree with us that’s their right, but I think we continue to think this is a really great thing for the University and when I say that I mean for our students and for our alumni as well as faculty and staff.”