Three Republicans took an unconventional stance on the issue of same-sex marriage in the Republican Party at a panel on Tuesday evening.

The discussion included Meghan McCain, the author of “Dirty Sexy Politics” and daughter of Senator and 2008 presidential candidate John McCain; Fred Karger, a political consultant, activist and the first openly gay Republican presidential candidate; and Gregory T. Angelo, the executive director of the Log Cabin Republicans, an organization that works within the Republican Party to advocate for equal rights for lesbian, gay, bisexual and transgender individuals. 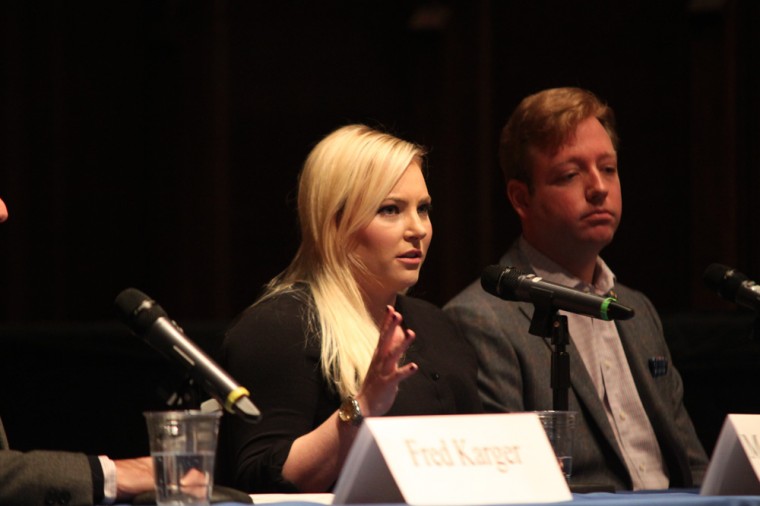 The panelists discussed topics such as banning anti-LGBT rhetoric from the 2016 election as well as the increasing trend in millennials within the Republican Party to support same-sex marriage.

Following the panel, the three signed the St. Louis Resolution, a document Karger wrote in response to a 2012 resolution by the National Organization for Marriage, which called on Republican presidential candidates to oppose same-sex marriage. The St. Louis Resolution calls for all Republican candidates for the 2016 presidential election to refrain from using any anti-gay rhetoric.

“There is a conservative case to be made for marriage equality to Republicans as Republicans,” Angelo said at the start of the panel.

Historically, the Republican Party supported and lobbied for marriage equality before the left started to, Angelo said. The left, instead, championed sexual liberation and not assimilation into the existing culture, although assimilation became an idea the left caught up to quickly.

“This is an issue that the GOP in general is lagging on,” Angelo said on same-sex marriage equality.

However, he continued to reference a number of Republicans who recently have stood up for marriage equality and have subsequently discovered an even broader electorate.

McCain said her start as a same-sex-marriage-equality activist began in a more personal manner. Her two gay friends were the only people, she said, that helped her through a depressing period of her life following her father’s loss in the 2008 presidential election.

“I just thought, if I can’t follow up and give them the same love and support, then I can’t live with myself,” she said.

McCain, who is the first straight Republican member on media organization GLAAD’s board, stressed her specific type of activism as one that comes through personal experiences and authenticity, tailoring methods depending on audience.

“I have found that if you speak to people in a way that speaks to them personally and from personal experiences and using different methods to talk about why marriage equality should be for everyone in this country, it works,” McCain said.

Karger called for the end of using LGBT issues as a “political football” in campaigns.

“I would argue that everything anti-gay in this country over the last 40 or 50 years has really come from Republicans and that’s why it’s hard to stick with this party for me as a gay man, but times are changing,” Karger said.

Angelo responded by disagreeing with Karger, holding the Democratic Party accountable for anti-gay legislation, specifically in regard to President Bill Clinton signing the Defense of Marriage Act and the “don’t ask, don’t tell” policy.

The panelists also agreed on the idea of keeping the Republican Party as a “big tent” party, an approach that seeks to attract people by advocating multiple ideologies within a party to attract more of the electorate.

The panelists also commented on the changing perspectives and trends of the American people toward supporting same-sex marriage, especially among millennials.

“The Republican Party is the ‘family values’ party, but the definition of what it means to be a family is changing,” McCain said. “I love millennials because they don’t question me. I can be a Republican and I can support marriage equality and support LGBT rights.”

According to a recent poll conducted by the Pew Research Center, 61 percent of Republicans under the age of 30 support same-sex marriage while only 22 percent of those 65 and older support it.

“Millennials are leading this charge for love and acceptance and embracing,” Karger said, referencing his need to hide his sexuality for as long as possible while working in Republican politics growing up.

Angelo added that younger kids and millennials don’t see what the “big deal” is with same-sex marriage.

“A majority of our executive board supported marriage equality,” Deutsch said. “We thought it would be just a very interesting topic. There aren’t too many Republicans who have much of a profile who support same-sex marriage.”

College Republicans appealed to Student Union for funding as part of the yearly Speaker Series. After applying to be considered for funding in July, the group presented to SU in September and was ultimately given funding in an 8-7 vote, the closest for any of the speakers in the series this year.

“There were a lot of people who really just didn’t want to give Republicans a platform, especially on an issue that is kind of owned by the Democratic Party and liberals, particularly among young people,” Deutsch said.

In hosting the event, the club hoped to spark discussion about the topic.

“I don’t think we’re expecting everybody to like the panel, but it’d be good to have people talking about…political issues,” Ford said.

Freshman Krista Galleberg decided to attend the event, seeing it as a constructive action fighting against partisan politics.

“I think it’s a necessary conversation to have and a way to transcend partisan politics. A lot of conversations seem to be about proving the other party wrong rather than furthering political progress, and I think that’s true for both parties,” Galleberg said. “If I don’t like partisan politics, then I should show up to the Republican Party endorsing same-sex marriage.”

“I’m excited for the future of the Republican Party, where it will appeal to a younger demographic and support same-sex marriage along with conservative ideas,” Felder said.