A transit champion transitions on to new work 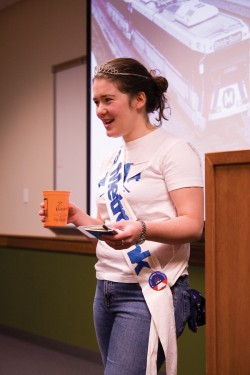 Liz Kramer speaks at a transit meeting in January. She became the face of the Washington University’s efforts to promote a countywide sales tax increase to fund more transit service. She will be moving to Chicago to pursue work in design.

But Kramer, who became the face of Washington University transit advocacy and a liaison between students and the administration, has finished her two-year administrative fellowship here and will move to Chicago next week to pursue work in design.

She leaves after finishing her advocacy efforts on campus and around St. Louis in the weeks leading up to the April 2010 election, which had a proposed sales tax for boosting funding to Metro, the area’s transit system. Transit advocates credit Kramer with helping mobilize thousands of college students and other young people to turn out and vote for the measure.

In addition, she got students involved in all sorts of projects, ranging from transit to the environment, sustainability and other topics — everything but the kitchen sink.

“And sometimes it was the kitchen sink,” Kramer said.

She began her fellowship after graduating from the University in 2008. Kramer was involved in community service as a student, holding the position of public outreach chair of the Alliance of Students Against Poverty. The group joined forces with the a cappella community in October 2007 put on the second annual Rhythms for Rebuilding benefit concert, which raised $2,600 for organizations that tackle poverty and malnutrition.

Even after joining the administration, Kramer continued working with students. She had a large impact in the months before the April election, when St. Louis County voters were asked for the second time in three years if they wanted to boost the county sales tax to fund more transit service.

Transit advocates were still reeling from the defeat of a similar measure in 2008 that resulted in the elimination of one-third of St. Louis’ transit service. Desperately needing a spark, advocates went to civic groups, businesses and educational institutions, including the University, to furnish a new campaign centered on reminding people that “some people ride transit, but everyone needs it.”

Kramer used an unconventional approach to get that message out to the younger crowd. She wanted transit to be an enjoyable, memorable experience. She said her goal was, simply, “to make transit fun.”

She had created a tiara-wearing alter ego known as Miz MetroLink and worked with other students and young advocates to throw MetroLink Prom, which was an actual prom on the MetroLink train system.

Whether she was frolicking on campus as Miz MetroLink or visiting other schools to mobilize students, those who know her or worked with her on public transit issues said she has left an indelible mark on the campus.

“She will be sorely missed…by both the Washington University community and the St. Louis community at large,” said Rose Windmiller, director of state relations and local government affairs.

Kramer and an army of students and green-group leaders appeared on campus with their own form of reminders: signs all around, a MetroBus-themed flash mob dance outside the Danforth University Center, an appearance by Miz MetroLink in Whispers Café. The students even got the help of Dining Services, which sold MetroBus-shaped cookies in the days before the election and allowed chefs to wear Metro buttons.

The students’ efforts seemed to work. Hundreds of supportive students streamed to the polls on April 6. The transit measure, known as Proposition A, passed overwhelmingly.

The student-led effort marveled regional campaign leaders so much that they recently gave a shout-out on St. Louis Public Radio to students here and at other local schools. Tom Shrout, former executive director of the Citizens for Modern Transit (CMT), said the student turnout defied history.

“All the experts said in an April election that no students will vote,” Shrout said in a phone interview. “Liz took it upon herself not only to pick off where she left off on the November of ‘08 vote…but to keep that momentum going and spread it to other campuses like UMSL and SLU and community colleges and Webster.”

CMT will honor Kramer on Sept. 17 with an award for her work in uniting young people around public transit. The University’s Rose Windmiller will also receive an award.

“I’m very honored to be recognized by CMT for the work, but I also really feel that the work was done by a lot of very dedicated students who were committed to passing Prop A,” Kramer said.

Kramer’s work in St. Louis may be done now. But Shrout, Windmiller and others say that Kramer’s impact will last long after she departs for Chicago.

“She was instrumental in getting a whole new generation of people in St. Louis acclimated not only to using public transportation, but also [to] supporting it financially,” said Windmiller, director of state relations and local government affairs.

Senior Peter Murrey, former president of Green Action, said Kramer “empowered students” by seeking to involve them in her projects. “No matter what year you were or if you had ever met her before…she wanted to include everyone on it, and her enthusiasm just bubbled over into you,” Murrey said. “It was just infectious.”

Not everyone agreed with the causes Kramer has championed. Opponents of Proposition A continually criticized the University for its U-Pass program, arguing that Metro was giving the school a big discount to provide free transit passes to students and employees here. The University and Metro repeatedly denied those claims.

“Now is the time for [opponents] to work with public transit agencies, government agencies in St. Louis to improve the system and to help make their problems less so,” Kramer said.