On-campus sex offenses rose in 2011, despite decrease in crime overall 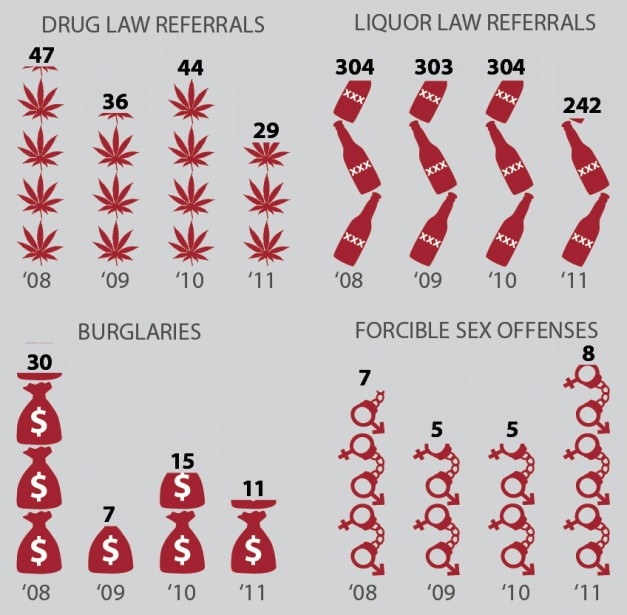 Crime reported on the Danforth Campus has generally decreased over the four years up to 2011, despite an increase in cited forcible sex offenses and the first reported on-campus hate crime in several years, according to new statistics released by Washington University.

The numbers reflect incidents reported to University officials, not necessarily ones proven to have occurred.

No one from the Washington University Police Department was available Wednesday night to provide details on the hate crime reportedly committed in 2011. Student Life contacted several Residential Life employees about the assault but none had any knowledge of the incident that reportedly took place in residential housing on the Danforth Campus.

The Clery Act was established in 1990 in response to the rape and murder of Lehigh University student Jeanne Clery in her residence hall in 1986. The Act obligates universities to report their crime statistics every fall for the previous calendar year.

The numbers do not reflect any data from 2012.

Chief of Police Don Strom said on Wednesday morning that campus crime remains low and that most of it is property or opportunity crime.

“Every now and then you’ll get a spike in something…during a particular year or month,” Strom said. “When I look at these numbers, typically over time what I see is every now and then a little blip, but they tend to hold pretty steady from year to year.”

Director of Judicial Programs, Tamara King, could not be reached for comment.

“That number represents an underreporting of the actual depth of the problem, and I think that’s true from campus to campus. For me, when I see that number start to go up, it’s troubling that it happens at all, but it’s encouraging that at some level, people are willing to come forward, report it to whoever they report it to and that it gets into either a system of support for that survivor of the sexual assault, or that there are consequences that can be handled either through the judicial code or some other place for that sexual assault,” Strom said.

“I would be more disturbed to see a zero number there, because I know that would totally under-represent the problem,” he added.

She cited the national statistic that one in four women and one in 33 men experience sexual assault on college campuses as likely more accurate.

Still, some students voiced some concerns with the numbers.

“I was actually surprised to hear about all the sexual assault statistics; that’s what really scared me,” sophomore June Jennings said.

Strom cautioned viewers of the statistics to heed aspects of crime the report does not include. While the Clery Act mandates reporting for burglary or unauthorized entrance into private space for criminal purposes, it does not require reporting for larceny or theft.

Therefore, things such as bike thefts, which Strom noted have increased so far this year, will not be reported in the Clery Act statistics.

WUPD Information and Evidence Assistant, Wendy Oloteo, who helped compile the statistics, said they might be artificially high for various reasons.

Incidents reported casually to “campus security authorities,” such as deans, athletic coaches and members of residential life are included in the Clery report, in addition to those reported directly to the police department. If incidents are reported to more than one authority confidentially, they may be counted twice.

“There’s reporting that you can do confidentially, so we try to make sure we don’t double count. But we have no way of knowing if they’ve told maybe [Student] Health Services and then filled out a confidential report that we’ve now counted something twice,” Oloteo said.

Oloteo also noted that the statistics show only crime reporting, not the resolution of those reports.

“What this doesn’t show, what they don’t want to know, is how many of these are cleared by arrest. That’s an important part of what we do, you know. The theft happens, but are we able to either recover the property or arrest the suspect,” she said.

While freshman Emily Dawes had reservations about going to school in one of the nation’s most dangerous cities, she said her mind changed when she got here.

“I have never felt unsafe on campus and don’t see crime as a large problem here. Even so, the campus has taken a lot of steps to ensure anyone who may be more uncomfortable feel safe too,” she said.