Protests erupted at major airports across the country over the weekend after an executive order signed by President Donald Trump Friday barred people traveling from seven predominantly Muslim countries from entering the United States. On Sunday afternoon, protesters from around the St. Louis region, including several Washington University students, joined together outside Lambert-St. Louis International Airport’s Terminal 1 to voice their opposition to the ban.

What began with a permit for 50 protesters and a Facebook event grew into around 1,000 attendees, according to an estimate by the St. Louis Post-Dispatch. An organizer for the protest said that American Civil Liberties Union (ACLU) of Missouri filed a lawsuit this morning in district court, which allowed the protest to expand beyond the initial 50 protesters permitted by the airport. 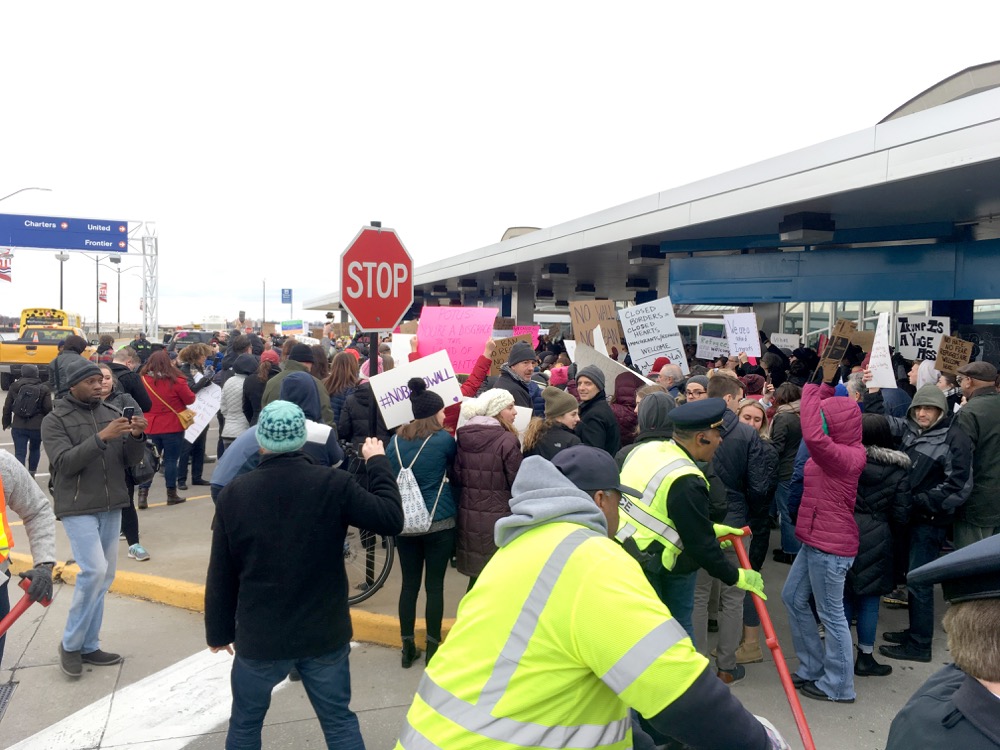 Airport police sectioned off a protest zone with rope, preventing those attending from impeding traffic outside the terminal, and officials said that no flights or passengers were delayed because of the protest.

While some protesters stuck to the sidewalk outside the terminal, others honked approval as they drove by. One group stood on top of the parking garage just across the street, holding large, red letters that spelled out “resist.”

Throughout the afternoon, opponents of the executive order levied charges—whether on a homemade sign or over a bullhorn—that the ban constitutes religious profiling and an anti-immigrant mentality. The crowd joined together with chants of “No ban, no walls, America is home to all” and “We will not go away, welcome to your 10th day”—directed towards Trump.

Although senior Taylor Bird McGuire was only able to attend for a short time before rushing back to campus, she said the sense of solidarity and unity was powerful.

“Being in that little mob of people felt so positive and so comfortable. But at the same time I feel like you can just feel tensions building each day under what’s going on,” Bird McGuire said. “Being in a space of people who are also feeling that tension felt very powerful but I couldn’t help but have tears in my eyes the whole time because I kept realizing being there and being grounded in that takes away the distance from when you’re just reading articles.”

Senior Emma Riley said she attended the protest in part to advocate for a more welcoming America.

“When I found out about the ban and how people were being detained even though they had green cards, it just seemed so against what I believe and how a nation should function,” Riley said. “Looking back at history, I think nations flourish when they welcome people in and welcome diverse points of view and just making a blanket ban across anyone coming from these seven countries seemed to me so intolerant and idiotic.”

Senior Adam Hoffman drove to the protest with around 12 other friends, and noted that the event helped present a unified front from everyday Americans.

“Probably most importantly, it’s the least I could do. It’s relatively easy to hop in a car with friends and drive down to the airport to cheer and march,” Hoffman said.

In addition to community members and students, local politicians— including Democratic mayoral candidate and Washington University MBA graduate Antonio French and 15th Ward Alderwoman Megan-Ellyia Green—were in attendance. Both emphasized the importance of strong city governments in resisting the Trump administration’s executive order and other issues.

Green noted that one form of opposition the St. Louis government could take is direct resistance.

“What we can do is choose to not adhere to the orders that are coming in from the federal government,” Green said. “That may mean some repercussions for the city, but I think that those are steps we need to be willing to take, along with cities across the country, in order to show resistance to some of these executive orders that are coming down.”