For the third time since the end of March, an emergency notice alerted members of the Washington University community Wednesday about the presence of a weapon on University property. But while the previous two alerts notified about developing situations on the North and Medical Campuses, Wednesday’s concerned the Danforth Campus, home to all undergraduates and the majority of graduate students.

As news spread, students and workers reacted to the emergency alerts sent out by the Washington University system. On both the South 40 and Danforth Campus, panic and confusion ruled as employees and students searched for safe spaces and professors determined whether to continue regular instruction in their classes.

The source of the emergency was the incidental shooting of Jessica Moore, a Bon Appetit employee at the South 40’s Cherry Tree Cafe & Deli who was shot in the forearm. She was in her car, with her brother in the passenger seat, on the way to begin her evening shift when the shots rang out.

Freshman Katherine Ingersoll happened upon the scene just after the shooting occurred. Walking from Olin Library through the Mallinckrodt Center, Ingersoll watched as a Washington University Police Department officer rushed past her, receiving a text alert soon after. Stepping out of Mallinckrodt Center onto Forsyth Boulevard, the severity of the situation became much more apparent.

A police officer looks at a bullet casing on Forsyth Boulevard after a shooting outside Mallinckrodt Center.

“I looked to my left and there was a woman who was sitting on the curb, she had her arm up, basically [WUPD officers] were bandaging her,” Ingersoll said.

Shortly after arriving at the scene, Ingersoll was told to leave the area, at which point she walked towards the South 40.

“Shepley [Drive] was empty, there was literally no one walking around,” Ingersoll said. “There were maintenance workers who had no update whatsoever other than the fact there was an emergency, but they had no idea what was going on.”

Sophomore Kourtney Kroll also happened upon the scene by accident while walking back to the South 40, finding Moore on the ground with officers around her.

“[Moore] was wearing all black so you could see she was a worker from the outfit. She was screaming and yelling because they were trying to keep her arm up, and then I saw a police officer running back from the street with a rifle,” Kroll said.

Kroll noted that, if not for Olin Library’s faulty printing system, she might have been at the scene when the shots were fired.

“I was trying to print at the library…nothing was going to my queue,” Kroll said. “If the printers didn’t take that extra minute, I would have been walking through everything as it was happening. WUSTL printing saved my life.”

As news spread around campus, students and workers reacted to the emergency alerts sent out by the Washington University system. Donna Grise, a cashier in Bear’s Den, arrived on campus as if it were any normal day. She tried to come down Forsyth Boulevard, her usual route, but found the road closed off by police. When she finally arrived at Bear’s Den, she was met with confusion and panic in the dining area.

“When I walked in, everybody was on lockdown,” Grise said. “I mean, I was hysterical; I’m crying, crazy, trying to figure out what’s going on, and everybody had their phones out trying to see the news and stuff, trying to see.”

Many employees across campus who aren’t directly employed by Washington University—like Bon Appetit workers—Grise added, were not receiving information about the emergency from the Washington University system, as they weren’t signed up within the WUSTLAlert system like all University students, faculty or staff are automatically.

One employee at Cafe Bergson said she knew about the alerts through her mother, who is a staff member at the University. The Cafe Bergson employee and others nearby her, however, were not receiving email or text updates.

Even among those who were signed up for the system, emergency updates didn’t always go through. Senior Ari Kaiser was in a class in the basement of Brown Hall, without phone service, when an alarm went off to signal the emergency. On top of that, they quickly found the doors wouldn’t lock.

“None of the text updates are coming through to us, so we just know that there’s someone on campus with a weapon and someone’s been shot,” Kaiser said. “And that’s all the information we got.”

One student, Kaiser said, found a creative solution to the problem of unlocked doors.

“It’s silent and it’s dark and some people are just crying,” she recalled. “One kid gets up and he’s like, ‘whoever has a belt, can I have your belt?’ He wanted to lock off the top part of the door, like tie the belts around it so you couldn’t open the door.”

Across campus in Simon Hall, sophomore Josh Rotker said students in his class were notified via a desktop alert. The professor dismissed the class and many headed towards the Bachelor of Science in Business Administration (BSBA) undergraduate lounge, across from Einstein Bros. Bagels. Those within the lounge, which is enclosed by glass, could see what was taking place in the hallways, where some became convinced that the shooters were in the building.

“[We] got as many students and workers and faculty and employees into the room as possible,” Rotker said. “Closed the door, locked the door, turned off the lights and basically got on the ground for three minutes in a mode in which we believed the shooter was actually in the building.”

Also gathered in the room were Einstein Bros. Bagels supervisor Charese Jones and her employees. Before the alarm had sounded, Jones stopped the other supervisor on her way out for the day.

“We heard some commotion going on outside, but we didn’t know what it was, so we’re just sitting here,” Jones said. “Usually we get an alarm on our laptops cause we’re supervisors. We didn’t get anything. Next thing you know the alarm is going off and we rushed to the [BSBA lounge].”

Despite the chaotic nature of the event and the false information surrounding the location of the shooter, Rotker commended the efforts of his professors and the other individuals in Simon Hall.

“It was this moment of everybody panicking to get into a room, thinking about all the other incidents that have happened at other universities,” Rotker said. It was nice to see everyone protecting each other, including Dean [Steven] Malter and [Professor] Glenn MacDonald.” 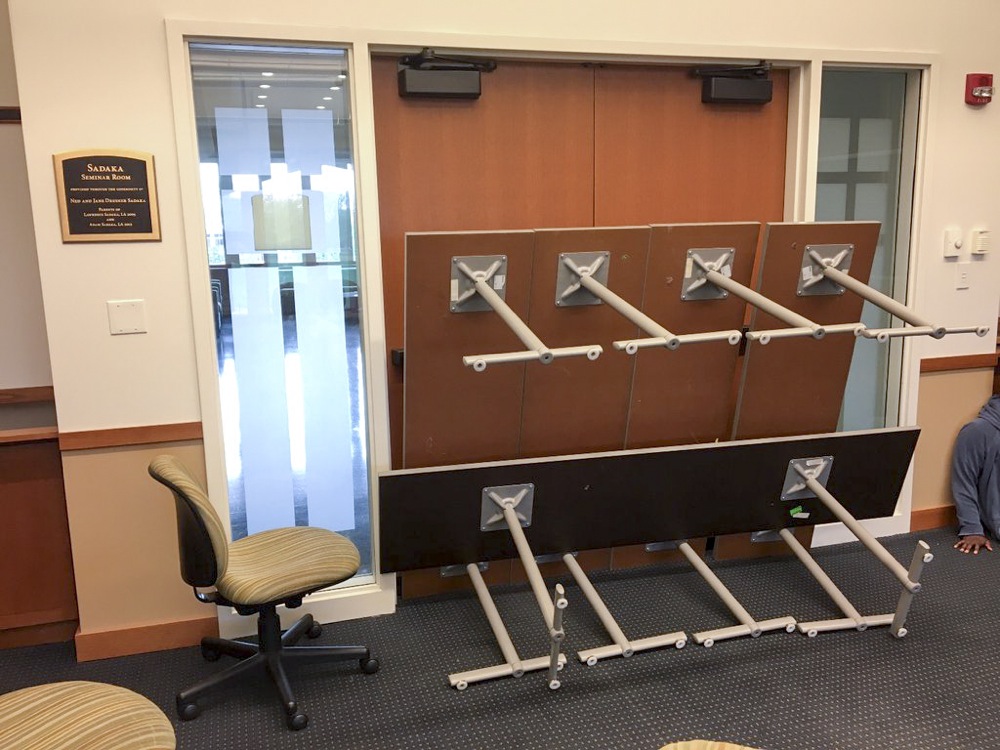 Tables barricade the doors of a Seigle classroom on Wednesday afternoon. Sirens did not go off in the building as the campus lockdown began immediately following the shooting.

After arriving at her class, sophomore Jessie Kurz noted that she was not met with the same sort of composed professor reaction, which prompted students to step in.

“I think it took someone saying something for the third time. Someone stood up and said ‘this is irresponsible and this is against University policy and you need to stop teaching right now,’” Kurz said. “He said, ‘I’m sorry,’ and he turned off the screen and some people kind of meandered out into the hallway. There were no precautionary measures other than the door being locked.”

Freshman Kaia Lyons noted a similar apathetic response in her College Writing class. After a student alerted the professor privately of the situation, the professor finished her lesson without telling the other students.

“At the end of class, she said that [the student] had gotten an alert about the shooting, and we all checked our phones and, lo and behold, there it was,” Lyons said. “[The professor] was like ‘I’m going to leave’ and she left, and she left it up to us as to whether we were going to stick around or go home.”

An hour and 13 minutes after the initial alert went out, the all clear was given at 2:48 p.m.

Looking back on the afternoon, Bill Beene, a chef at the Bear’s Den stir-fry station and a colleague of Moore’s, said that the whole experience was terrifying, in part because of the high frequency of gun violence is in society today.

“I’m glad it wasn’t worse, because we love the kids, it was really scary,” Beene said. “You see so much in the news about this stuff happening, Sandy Hook, movie theaters, the streets of North St. Louis, you know, wherever, so it makes you more scared because you’re aware of it, you see it on the news. I’m just glad she’s okay, it obviously could have been much worse.”