Washington University holds on to 14th in national rankings 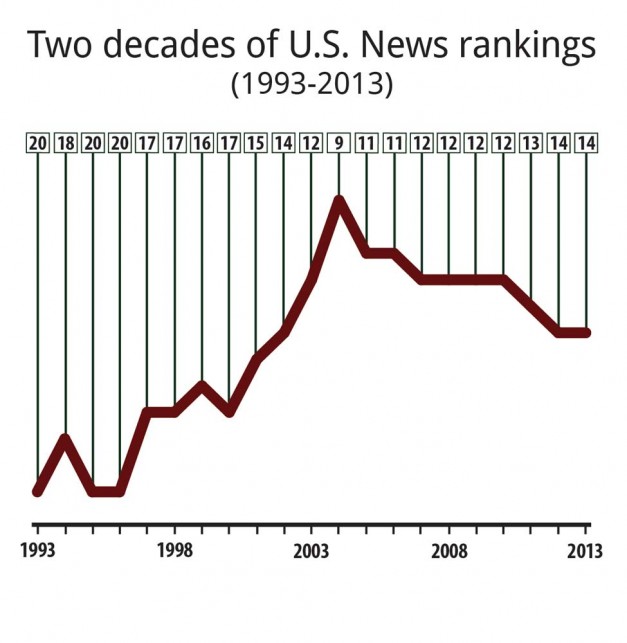 Jen Smith, dean of the College of Arts & Sciences, said that although she is pleased with and proud of the rankings released Wednesday, they can’t fully reflect the Washington University experience.

“The things that I really value so much about this place are not the things that go into the metrics that make those rankings. It’s about community; it’s about interaction. I don’t think those rankings show how special we are and the aspects of our educational experience that really do make us great,” she said.

“I don’t want to say I think we’re better than that [ranking], but of course, I do,” she added.

While Smith noted that the high ranking does attract prospective students, she pointed to the importance of experiencing the campus atmosphere firsthand.

“I’m sure being up there in the rankings is what puts us on people’s radar, but what you hear over and over again is that it’s once students get on campus and visit that they fall in love with a place and decide they don’t want to go anywhere else,” she said.

“We’re never not paying attention to those things [that go into the rankings]. …These are just all things that we’re constantly working to do better in…for the sake of improving the quality of the education that we’re providing,” Smith said.

“We understand the attention that the college rankings receive, but Admissions does not talk about or focus on these rankings when we meet with prospective students and their families. We are proud to be considered one of the country’s finest universities, but we think the most important issue for a prospective student is to learn about…who we are—our great academic programs, our supportive community, and outstanding students and faculty. When prospective students learn and focus on knowing us, they will then know if W.U. is a good place for them,” Shimabukuro wrote in an email to Student Life while out of the country.

Mark Smith, director of the Career Center, said he refers to the rankings on items such as students’ entering credentials when talking with employers who are considering a visit to the University.

“I think the importance of the ranking is basically just for employers that are not as familiar with us, and I think most employers are now familiar with us, but to kind of give them an outside body showing them that we are really a top tier school,” Smith said. “What I tell these employers is if you look at entering credentials, our students are stronger than most Ivy League schools.”

Sophomore Jon Luskin said he looked to the rankings in deciding which school to choose from a perspective of future job placement.

“It was important to me that we were ranked high, just from the perspective of getting a job,” he said. “In terms of deciding between this and similarly ranked schools, both above and below, I don’t think the rankings played a big factor. I just wanted to know that the school that I ended up going to was rated high enough that it had respect and some degree of prestige among employers.”

It was the atmosphere and the academics that really drew him here, he said.

Senior Shuran Liang, an international student from Toronto, Canada, also said that the ratings contributed to his choice to matriculate at Washington University.

“Wash. U. wasn’t really on my radar initially,” he said. “I was applying to the East Coast and West Coast, even down into Texas. I actually saw that Wash. U. was in the rankings and was like, ‘Hey, there’s this really good school in the Midwest,’ and it was a decent-sized student body.”

With an increase in collegiate competitiveness in recent years and decades, Smith said that it is perhaps more difficult than ever to maintain one’s place in national rankings.

“The big picture has been one of climb, on a decade scale, we’ve certainly been climbing. And, you know, it gets harder and harder,” she said. “It’s like trying to maintain a 4.0.”