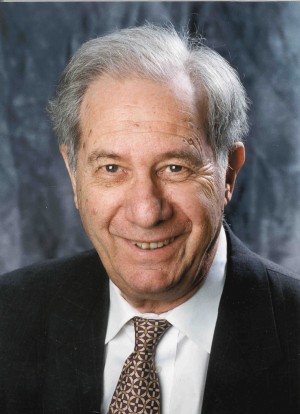 WUSTL Photo
With the 2012 elections looming, a Washington University professor says increasing partisanship is impeding the government from finding a lasting solution to existing problems.

Professor Murray Weidenbaum, the Edward Mallinckrodt Distinguished University Professor of economics said the nation’s precarious economic climate continues to be a major concern, even as the nation’s finances gradually begin to recover.

Weidenbaum, who served as assistant secretary of the treasury from 1969 to 1971 under the Nixon administration, and as chairman of the council of economic advisers from 1981 to 1982 during the Reagan administration, is often considered the architect of Reaganomics.

“This must be the slowest economic recovery in modern times. You have to go back to the 1930s to find a recovery this slow,” he said. “At an annual rate of 2 percent to 3 percent a year…that’s not a strong recovery after a recession.”

While Weidenbaum said most economists agree that the U.S. has successfully averted a double-dip recession and opened the possibility for recovery, he noted there are still major problems to be worked on.

He said that both short- and long-term solutions are necessary to combat the nation’s ever-increasing deficit.

“In the long run, it is clear that we have an unsustainable economy,” Weidenbaum said. “In the short term, there is need for additional stimulus.”

He said the partisanship in American politics is majorly hindering this needed long-term recovery.

“The problem is, there is no common ground between the conservatives and the liberals in this election,” Weidenbaum said. “There seems to be little political pressure to adopt [practical] responses toward the economy.”

Although he served as an economics advisor for two Republican presidents, Weidenbaum does not express his preference over one party or the other.

And he says longterm tax cuts have caused a rift between Democrats and Republicans.

“The so-called Bush tax cuts expire at the end of the year. Both parties believe that most tax cuts should be extended, but there is disagreement over whether people at the top bracket [should keep their tax cuts],“ Weidenbaum said.

According to Wiedenbaum, the economic system needs to undergo an overhaul and special privileges need to be cut out of the tax system.

He has mixed feelings about the Obama administration’s efforts to stimulate the economy.

“It’s an uneven record. I think the large stimulus bill did help, but it’s disillusioning when you read the details of the bill,” he said. “A lot of the spending went to special interests, which diluted the economic recovery.”

But he believes the burst of rapid regulation created in haste will create unexpected problems in the future.

“There are many uncertainties as to what the regulations are going to do,” he said. “I am not sure if we are increasing the amount of uncertainty or not.”

He thinks the regulations will serve as deterrents for American business investments.

“There are hundreds of regulations that have to be addressed under the Dodd-Frank Act, the healthcare reform the environmental regulations and the tax laws,” he said. “There is great caution from the business community on how they should invest.”