According to a University statement, the AR-15 semi-automatic weapon was found in the Phi Delt house and the handgun was found in a car parked in a nearby University garage; both belonging to the same student. An anonymous source called University administration with a tip that a member of Phi Delta Theta was in possession of a firearm mid-morning Monday, Feb. 19. 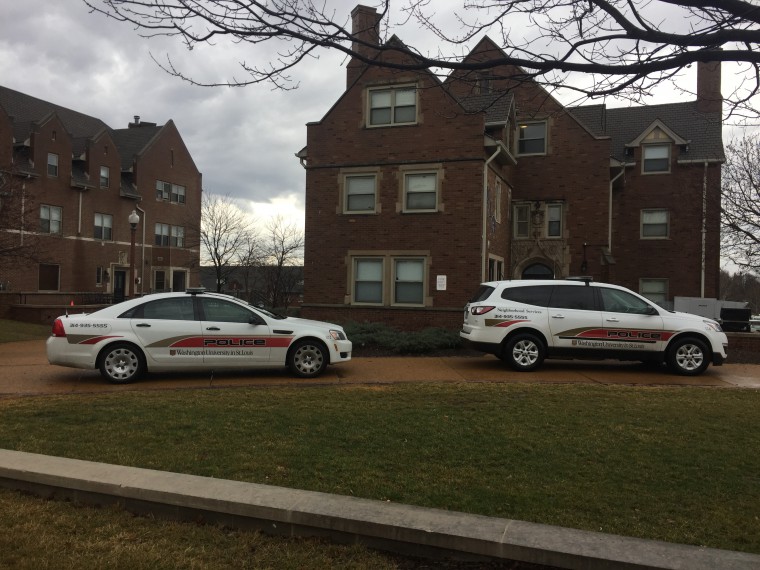 “There was no active threat; however, this put at risk members of our university community and is a very serious violation of university policy,” Chancellor Mark Wrighton wrote in a school-wide email.

The night of Feb. 19, two anonymous sources were called into the WUPD station to provide information, which included a photo posted to social media of the firearm. In the photo obtained by Student Life, a subject is holding the AR-15 semi-automatic in a room with a Phi Delta Theta flag partially visible.

According to an anonymous source, WUPD said it would not raid the Phi Delt house until it could acquire a warrant. However, according to Vice Chancellor for Public Affairs Jill Friedman, a warrant was not necessary, nor was one obtained before WUPD entered the house.

Tuesday morning, WUPD officers arrived at the Phi Delta Theta house. Later that day, WUPD vehicles continued to arrive on the scene, along with campus officials including Assistant Director of Sorority/Fraternity Life Austin Sandoval-Sweeney and Associate Director for Campus Life Stephanie Weiskopf. A St. Louis Police Department K-9 unit entered the house with dogs as officers remained at the house stationed at front and back, talking with members of Phi Delt outside the house and blocking people from entering.

The student in possession of the firearms has been suspended and removed from campus.

Phi Delt was initially suspended in September based on a hazing incident that occurred in spring 2017. According to Friedman, the decision to permanently suspend the fraternity was based on other violations of their suspension, not the discovery of the firearms today. All fraternity members have been ordered to vacate the house immediately.

“There have been concerns about their activity under that temporary suspension,” Friedman said. “The decision on this permanent suspension was in consideration of these concerns and made overwhelmingly on other violations [apart from the firearms].”

Phi Delta Theta’s president, junior Tom Hutchison, could not be reached for comment at the time of publication.

Editor’s Note: A previous version of this article misstated Vice Chancellor for Public Affairs Jill Friedman as having said there were “tons about their activity,” when Friedman said “there have been concerns.”