In the 3 years that Mark Alford has been the chair of Washington University’s physics department, few women have held a tenured or tenure-track professorship. Currently, that number is zero.

Alford, along with the department, has recognized this problem in the last several months, making an effort to make significant changes within the climate of the department in addition to searching for women to fill open positions. In comparison to peer institutions, where the percentage of women professors within physics range from 10.4 percent at Cornell University to 38.5 percent at Harvey Mudd College, Washington University falls far below the norm. 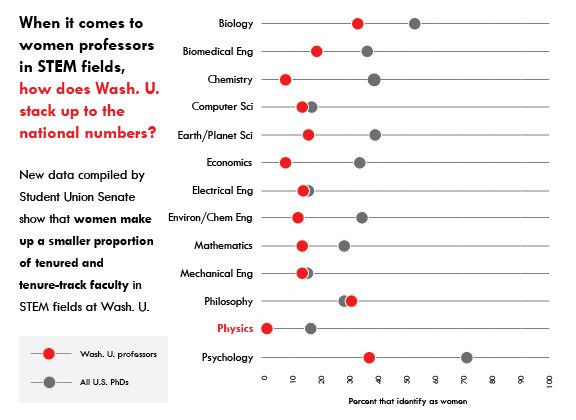 Currently looking to hire both a biophysics experimentalist and an astro-particle physics theorist, the physics department has women making up three of five and one of six of candidates on the shortlists, respectively.

Christine Floss, a research professor in the physics department, noted that she has only just realized the sexism that has been present throughout her entire career. The issue became more visible to her following the release of the “People’s History of Washington University: A Disorientation Guide,” a website launched in September 2015 by several Wash. U. students and faculty that featured essays that covered topics like identity, activism and University history. In it, the subject of women within the physics department was discussed.

“I don’t know what it is about me that has made me oblivious to all of this, but I’m only now becoming aware of all of these things and noticing, and, thinking back over my career, there have been things that have happened that have probably been discrimination or harassment and things like that that I’ve just not been aware of somehow,” Floss said.

Floss is now the chair of the physics department’s diversity committee, where she has been working with several other members of the department to improve the workplace climate, in which people hesitate to discuss instances of discrimination.

“One of the people on the committee yesterday was talking about the problems she had had within her research group, and it was very clear that she was reluctant to even bring those things up a little bit,” Floss said. “That tells me that it’s going to be a long haul before we fix these problems. Everybody has stories, everybody has experiences, but I really think a change is going to be difficult.”

“I don’t think there is an anti-female atmosphere here. We probably haven’t done the best we could; we’re trying to improve the departmental atmosphere for women, but as far as why the tenured and tenure-track slot has been so low on women, I really am not sure why,” he said. “It doesn’t make sense to me, honestly. And I would like to make it not a thing anymore, because then I wouldn’t have to keep asking myself why is it that in this area it just hasn’t happened.”

The absence of women hasn’t come from a lack of trying, Alford said. He noted that women often make it onto the department’s shortlists for professorships, and are even offered positions, but they turn offers down more often than men do. According to new research from an interdisciplinary team of Washington University faculty members, women are turning these positions down due to concern for their partner’s employment, while men typically do not press this issue as often.

“Men are less likely to follow their wife without a clear job offer for them, whereas a woman is more likely to follow her husband who has a good job offer and not demand or require in order for him to accept it that she must also have—that’s what we suspect. In other words, it’s the—what people in physics sometimes call—the two-body problem, where, in order to get one person, you’ve got to give two people a job,” Alford said.

“If out of these two searches we manage to hire a woman, that would actually be quite a success. That’s really the most I’m daring to hope for,” Alford said. 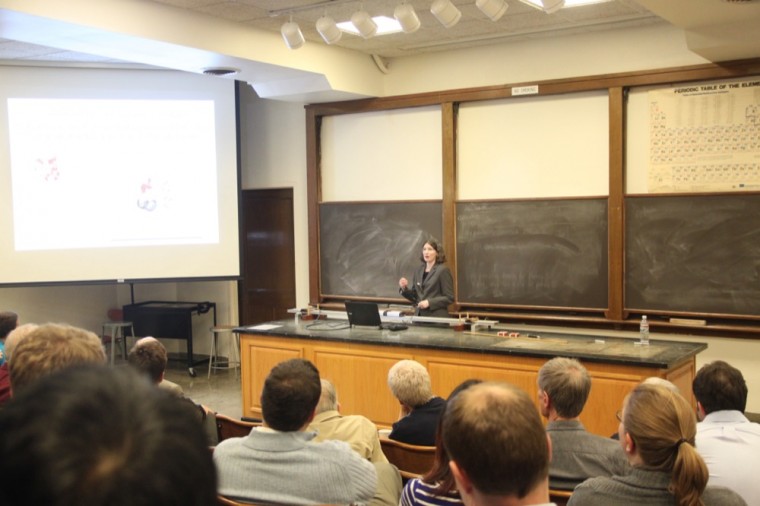 Dr. Katherine Truex, a biophysicist at the NIDDK National Institutes of Health, presents her lecture “The Dynamics of Individual Biomolecules: Fluorescence Spectroscopy of Nucleic Acids.” Truex’s talk is part of a series of lectures by candidates for the physics department’s open tenure-track position.

Mairin Hynes, a physics lecturer, is one of the few female faces of the physics department. She noted that it was challenging to have no other women around.

“It usually just feels like you’re different from everybody else, and I know talking to students that they feel the same way,” Hynes said. “You’re in class and you look around, and you feel like you don’t fit in. I’d say that’s the biggest thing you always wonder: do I fit in here, do I not fit in?”

Hynes noted that one program she has been especially happy with in the past several months has been the Women in Physics group, which meets for breakfast in the Center for Diversity and Inclusion. She said that she hopes programs like this will give women a sense of solidarity.

Even so, students are looking to call attention to the issue. The Student Union Senate passed a resolution on Tuesday calling for the University to promote the hiring of more diverse faculty and to be more transparent in reporting departmental data.

Junior Sih Oka-zeh and sophomore Stella Schindler worked together to create the resolution, focusing on issues that they considered to be of extreme importance to the community.

“I feel like yes, it’s my decision to come to this school, but it’s part of the University’s responsibility to provide a wide array of ideas for students, whether these come from experience or religion, race, ethnicity,” Oka-zeh said.

She noted that although the resolution will not directly lead to any action, it was certainly meant to inspire change.

“We can’t force [the] administration to do anything, and we don’t know exactly what their inner workings are, but by stating that this is something that is on the students’ minds, it brings it to their attention and, by then choosing not to act on it, kind of leaves them in a place where they don’t have the trust of the students and the support of the students in the future,” Oka-zeh said.

Schindler, a physics student who has experienced some of the more overtly sexist problems of the physics department herself, felt that this resolution was an important first step university-wide.

“It’s meant to address broader issues at the University within the context of physics, because physics has been highlighted recently as an instance where there are bias and harassment issues and lack of diversity,” Schindler said.

Vice Provost Adrienne Davis, who Oka-zeh and Schindler consulted while writing the proposal, was adamant that the issue of representation was a problem that needed to be solved.

“On the one hand, I’d say we’re not that unique, but, on the other hand, it’s unacceptable. It’s a systemic challenge. We’re a leader in everything else we do…so, we should also strive to become leaders in diversity,” Davis said. “It’s not that they haven’t tried to hire women; they have. But the women would prefer to go to a place that already has women, and I don’t blame them.”

Editor’s note: This article has been edited to reflect that Mark Alford has served as a department chair for 3 years.