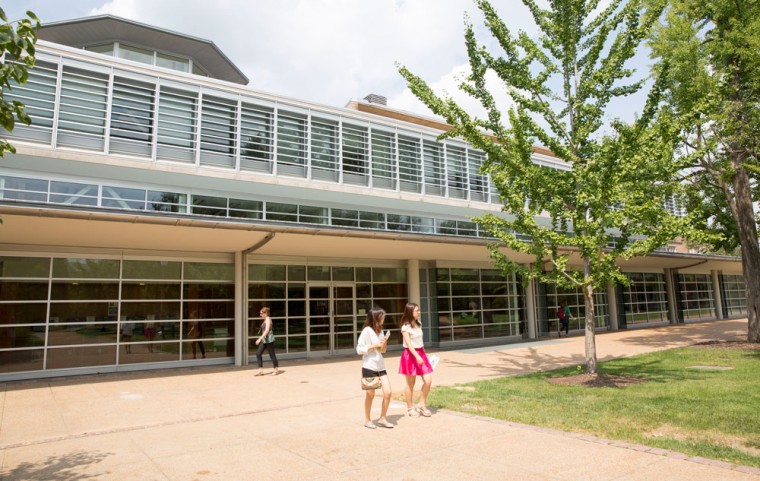 Olin Library awaits improvements. A new and larger entrance to the library on the east side of the building will be part of the upcoming $18 million renovation project, which aims to expand the library’s available space and increase its accessibility to students.

A completely new Whispers Cafe, additional entrances and an indoor glass tower are all features to be included in the Olin Library Transformation project, expected to begin in the spring of 2016.

The $18 million project, which is largely donor-funded, was designed in response to user feedback. According to librarian Sarah Laaker, some goals include increasing access to power sources, adding greater variety of seating, research and learning spaces, and enhancing visibility of special collections and services located within Olin Library.

Fortunately, the majority of noisy construction will take place during breaks in the academic year.

“By the time it gets into midterms and finals, the noise from the construction crew won’t be as great,” Laaker said. “We want to make sure we aren’t having a negative impact during that time, so they’ll get the noisiest stuff done early during spring break. They’ll still be working on it, but it will be quieter.”

Talks of Olin Library renovations began in 2013, nearly 10 years after its most recent upgrade that added 12,000 square feet to the space. This renovation will focus on opening up currently inaccessible spaces, including the area directly below Whispers.

Construction will officially begin during spring break of 2016. The first task of the project is to create the east entrance (facing the Brookings side of campus), as the current south entrance will be less accessible during Whispers renovations. The majority of the construction will take place over the summer of 2016, and the Whispers excavation will begin soon after commencement of the following academic year.

Currently, Olin consists of five separate levels: B, A, 1, 2 and 3, going from lowest to highest, with 1 being the ground floor. As of now, the space below Whispers in completely inactive on both levels A and B.

According to Laaker, the project will excavate below Whispers to utilize valuable programming space.

“That’s where we will provide more research spaces, bringing a lot of great visibility and connectivity to these newer services in the library,” Laaker said.

Among some of the services the new library layout will highlight are data and GIS (geographic information systems), instructional support and research services.

Special collections are another central focus of the renovations. Now located about a mile away on West Campus due to a lack of space, many of these collections will have room to be brought back to the Danforth Campus. This will increase their accessibility for teaching, learning and research, Laaker said.

“Imagine those pathways being really robust opportunities to see not only library collections, but to engage in things that are happening on campus,” Laaker said.

According to Laaker, the glass tower will span from level A to the third floor, featuring an open-air style balcony space on the second floor and a classroom on the third. The tower will be about 28 feet in diameter and include study spaces and seating.

Laaker said that fall 2017 is the target date for the new and updated spaces to be ready in Olin Library, although the majority of the building will still remain open during the construction.

“We’re going to be working hard to maintain all of our services we have while this is going on,” Laaker said. “During the previous [renovation], Olin also stayed open for that project, which was 1999 to 2004, so that was a project that really touched the whole building.”

Sophomore Carson Platnick thinks the renovations are necessary, but is wary of the effect they will have on students looking for quiet space.

“Especially since class sizes are increasing, more seating might be a good thing to have, because the library can already get crowded,” Platnick said. “I just hope that the construction isn’t too disruptive over the next couple of years.”