Starbucks aficionados can rejoice, as the popular coffee shop’s franchise in Bauer Hall will open on Monday.

Unlike Starbucks locations in stores like Target or Barnes & Noble, the Starbucks shop in the business school building will be like any other independent store, with all its normal products and features—including the pumpkin spice latte, which will be available at all Starbucks starting Monday.

The full-service Starbucks will accept store gift cards, cash, credit and Bear Bucks, but not meal points, though Bannister said the business school has reached out to administration about the latter.

The highly anticipated Starbucks is set to open its doors to the Wash U community this Monday. The store will operate like any other location and accept Starbucks cards, but will not accept meal points.

“We’ve expressed interest to the central administration to be able to take [the] student meal service plan; we’re hoping they will get back to us at some point in the future with a viable way to do that,” Bannister said. “As of now, I suspect they have contractual relationships with Bon Appetit that they have to work through.”

Opening alongside Starbucks is the Bauer Hall Cafe, which will serve made-to-order sandwiches and feature a salad bar, soup, international station, pizza, and fountain and bottled drinks.

Both Starbucks and the cafe will be contracted through Aramark, a contractor the business school currently uses to run the Knight Center and the Einstein Bros Bagels in Simon Hall.

The Starbucks will be open from 7:45 a.m. to 8 p.m. Monday through Thursday and will close early on Fridays at 2 p.m., while the Bauer Hall Cafe will open later, at 10:30 a.m. Bannister cited the lack of University programming on weekends as the rationale for the lack of weekend hours.

“In general, we’re not holding weekend classes, etc., so there isn’t a big rush of students and demand is less,” Bannister said.

Bannister noted that though there is an initial plan for staffing the new cafes, Aramark might shift employees from other projects to the cafes if it sees a need.

Although the new cafes will not be operated by Bon Appetit, Bannister did not believe that their presence would hurt Bon Appetit’s cafe sales, stating that they experienced no such loss when Einstein Bros Bagels cafe opened several years ago.

“We don’t really view ourselves in competition [with Whispers]. The idea of providing the food service here enables [students] to meet their needs here, spend more time here, be immersed in their learning environment and build community,” Bannister said.

Students are greeting the new dining options with mixed reception. 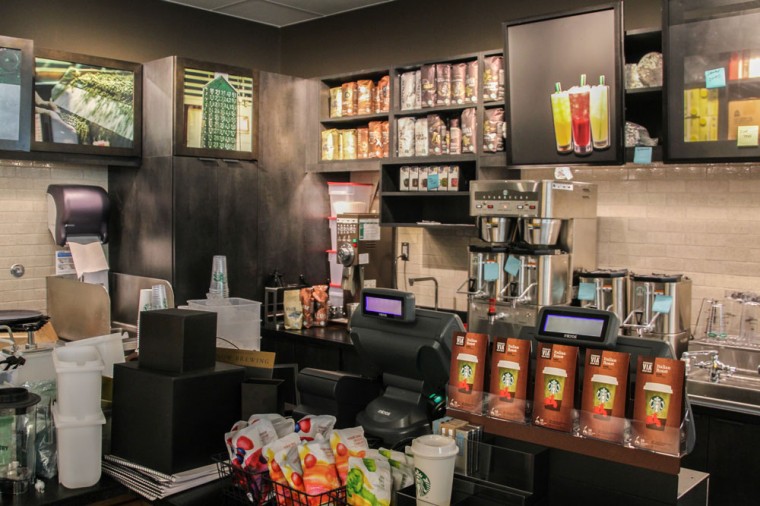 The Starbucks in Bauer Hall is stocked to serve the student body starting on Monday. According to Brian Bannister, associate dean for administration, the store will be a fully licensed location offering the complete range of Starbucks services.

Julia Curbera, a sophomore in the College of Arts & Sciences, said that she would likely not use the space for the food.

“I’m not all that into Starbucks, plus I’m not around the [business] school that often. Chances are I won’t be seen eating there too often, but I think it’ll open a great casual study place,” she said.

Imran Mumtaz, a sophomore in the business school, harbored more enthusiasm for the opening.

“I’m pretty excited about the new Starbucks. Having a coffee shop in the business school’s building is a must, and it’s refreshing to have a new choice for a quick morning snack or a late-night coffee,” Mumtaz said.

Andrew Yu, an Arts & Sciences junior, hopes instead to see more support for the St. Louis community in the future.

“I think it’s great that we’re getting more options, but it’d also be nice to see Wash. U. supporting more local coffee shops as well,” he said.