University to install fences around edge of North Side 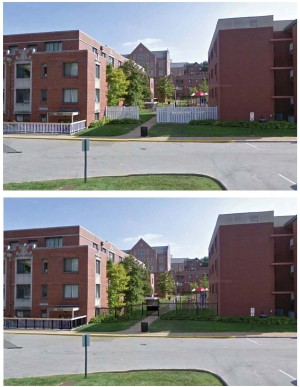 Above: the existing fence around Millbrook Apartments. Below: a rendering of a plan for a new fence to include a gate, accesible only with a University ID.Renderings of the proposed North Side gate, facing south at Millbrook 1 and 4.

Washington University is planning to erect fences on the North Side residential area of campus over the coming year as part of an ongoing effort to improve security.

The project will involve placing three fences along the Village East and Millbrook dormitories, which will be connected to fences already in place on the northern border of campus.

The Department of Facilities Planning and Management plans to place four gates along the fences to maintain student access to the North Side. The fences will block access to residential areas on the north side of campus to people without key card access.

In the second phase, the University will program the locks on the gates to only let in people with key-card access. This phase will likely take place over the summer.

WUPD Chief of Police Don Strom said there are several reasons the University is undertaking the construction project—principally, to enhance security.

“We’re right there at a major thoroughfare with access to our residential areas; we’ve done our best to enhance security [and] restrict access to those who live in those areas [but] there have been a few episodes of people who have wandered into the Millbrook apartments area,” he said. “It is important to direct people into open areas.”

He said the fences will help prevent future incidents from occurring.

“I believe it will enhance security for that area,” Strom said. “[Restricting] access to our residential areas is an important part of the safety model for our campus.”

He added that the fences will also deter students from crossing Forest Park Parkway in the middle of the street.

“There have been some real concerns historically with the foot traffic that is crossing Forest Park Parkway in that area; part of the concern is how could the fencing direct people towards the intersection and a more safe crossing,” Strom said. “It was particularly dangerous and we’re lucky somebody wasn’t hurt.”

Project manager Brian Newman said that aesthetics are a third reason for constructing the fences. With the new construction, the gates surrounding the Northern edge of campus will be uniform in appearance.

“This is the first part of our campus [people] see when they come in from the airport. We want to present an attractive face to visitors, and this is an easy way we can do that,” Newman said.