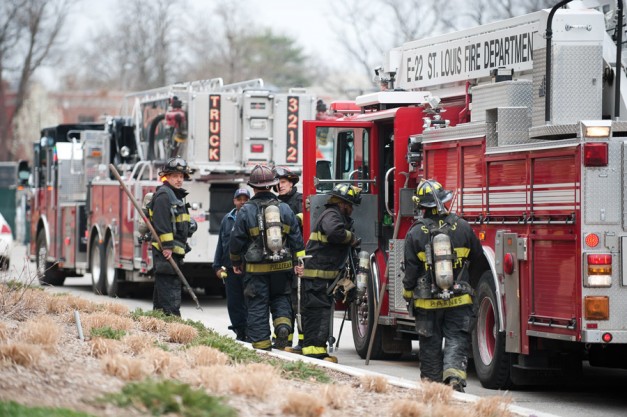 St. Louis Fire Department firefighters pack away equipment outside of Brauer Hall early Tuesday afternoon. At least nine fire trucks from three departments responded after a mishap with a reaction experiment in an Environmental Nanochemistry Lab led to a 911 call. There were no injuries.

A mishap with a reaction experiment in an environmental nanochemistry laboratory of Brauer Hall brought at least nine fire trucks to the northeast of campus Tuesday afternoon.

No one was injured and, according to fire department officials at the scene, damage was negligible.

When the reaction, carried out in a microwave inside of a fume hood, started smoking, the student performing the experiment phoned the Washington University Police Department, which called 911.

Michael Arras, deputy fire chief for the city of St. Louis, said that the accident was quickly contained and repercussions were minimal.

“[There was] a little bit of dry powder, but that’s about it; other than that, it was contained,” Arras said.

Many students inside the building were unaware of the incident until the officers ran in.

The “first alarm” dispatch included at least seven trucks from the city of St. Louis, including one hook-and-ladder truck and a hazardous materials truck. Both the University City and Clayton fire departments were at the scene.

“Because we got it as a possible chemical leak, we dispatched a HazMat [truck], but it wasn’t needed,” Arras said. “You have to be prepared for anything.”