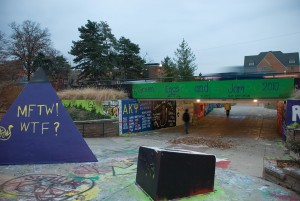 The Underpass, which connects the Danforth Campus and the South 40 is pending a complete renovation. Construction is not expected to happen until the summer of 2012.

Washington University is planning to reconstruct the storied Underpass, the popular student advertising spot and pathway that has connected the Danforth Campus and the South 40 since it was built in the 1960s.

Though discussion on the changes has already begun, actual construction is not expected to happen until the summer of 2012.

Facilities Planning and Management is consulting with the city of Clayton as well as the Missouri Department of Transportation (MoDOT) to plan the construction. The project itself will take at least four months to be approved, and after it is designed, the final approval will take another four months.

Students learned of the change this week through brief mentions in Student Union e-mails.

Overall, students find the Underpass useful because of its advertisements, which student groups are able to paint themselves after registering spaces.

“I like it … I can know what’s fun going on. There must be some events I might never be able to know if the information were not posted on the underpass wall,” sophomore Anne Diaz-Arrastia said.

Facilities Planning and Management is trying to schedule the renovation so that students are not affected.

Designers have just been commissioned for the project, and Facilities is still not sure whether the construction will occur in one or multiple phases. According to Project Coordinator Sarah Stanton, the choice is between rerouting all traffic and pedestrians for a short period of time, or extending the process so that traffic on Forsyth Boulevard can still cross the bridge. Extending the process, however, would result in a longer inconvenience for pedestrians, who would have to enter the South 40 by going around the music building.

SU is participating in discussions with Facilities to ensure that student input is being taken into account.

On Nov. 30, SU sent out a survey asking students about their interaction with the Underpass—how often they passed by or painted it, as well as general likes and dislikes. According to junior Cody Katz, SU vice president of public relations, approximately 400 replies pointed out just one concern: water leakage.

Several years ago, paintable sculptures in the form of three-dimensional shapes were added to the north side of the Underpass. In the summer of 2008, a temporary reinforcement was added to the Underpass itself.

The convenience of the Underpass is a key part of its appeal.

“I think it works well,” freshman Julia Katris said. “I usually use the Underpass because it is the fastest way to get to the campus.”

According to Stanton, the bridge is nearing the end of its projected lifespan, though MoDOT does not consider the structure at all hazardous.

“It needs a renovation at some point because it won’t be up to code,” Katz said. “We have a meeting next week to find out exactly what’s going on.”

While plans are in their initial stages, Facilities and SU have already established a few priorities.

According to Stanton, one goal is to widen the bridge to reduce traffic among bicyclists and pedestrians.

“If you look at what we’ve constructed between Skinker [Boulevard] and Hoyt [Drive] along Forsyth, that will continue from Hoyt to Wallace [Circle] over this summer,” Stanton said. “We’ll continue that strategy to enable better shared pedestrian and bicycle access across the bridge.”

SU is also working to ensure that the Underpass can continue to serve as an advertising tool for student groups.

“The spots are pretty big, and a lot of people see it as they come by,” said freshman Chris Au, who has painted the Underpass twice this semester. “It’s a great place to advertise.”

Katz is also working to reach out to give other student groups, including Congress of the South 40 and the SU Senate, input on the plans.

With additional reporting by Sam Kwak