Demands made of chancellor

Undergraduate and graduate students, professors and St. Louis community members gathered for a brief “speak-out” with the objective of making Washington University a sanctuary campus Wednesday afternoon in the Danforth University Center.

Just after noon, professor Jeffrey McCune read a letter, published today in Student Life, that was drafted by students and faculty addressing their support of this initiative, with five concrete steps they wanted to see implemented. 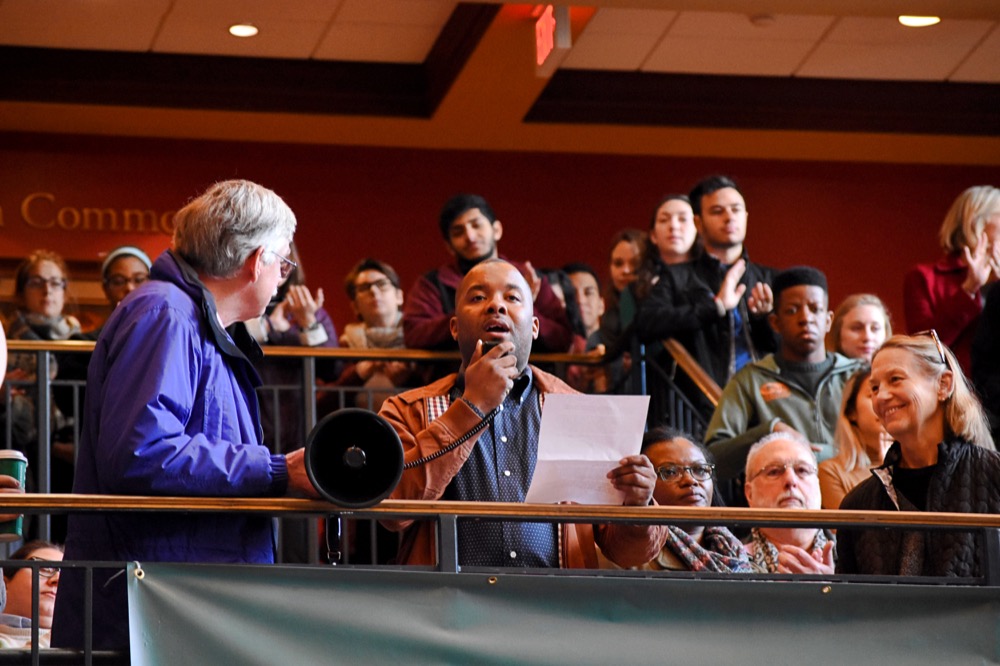 Professor Jeffrey McCune reads a letter drafted by students and faculty addressing their support for making Washington University a sanctuary campus. A “speak- out” in support of this initiative was held yesterday afternoon in the Danforth University Center and was attended by undergraduates, graduates and professors.

These measures included making pro bono legal advice available to impacted students, providing free safe housing to students during academic breaks, a safe space for students who need to discuss the emotional impact of the ban, financial support and loan forgiveness for students who are unable to continue their education and a refusal to comply with Immigration and Customs Enforcement (ICE) and Customs and Border Protection (CBP).

Washington University has released statements aligning itself with other peer institutions in opposition to the ban, with Chancellor Mark Wrighton even appearing on CNN on behalf of the group of universities to explain their stance. The University, however, has not yet declared itself a sanctuary campus, while several other institutions, including University of Pennsylvania, Connecticut College and Swarthmore College have done so in the past few months.

The speak-out was organized by several groups—the Students for Justice in Palestine, Association of Latin American Students, Azadi and the Muslim Students Association—in conjunction with graduate students and professors.

“I know there are several student groups who feel unsafe and frankly unwelcome…and a lot of people are disappointed that [declaring Washington University a sanctuary campus] hasn’t happened yet, so we decided that it would be really powerful if we got faculty to support us and to support our endeavors to make these students feel comfortable. There were so many faculty members who were so passionate and wanted to take part in this,” Suparna Malia, a sophomore involved with Azadi, said.

Pablo Zavala, a Ph.D. student in Hispanic Languages and Literatures, said that the groups intend to continue working and putting on marches and demonstrations until a decision is made to make Washington University a sanctuary campus.

“It feels like intolerance has been institutionalized and all of these sentiments that people have are becoming more visible, so regardless of whether the travel ban is instantiated in the way that it was originally instantiated, intolerance towards marginalized sections of society, of which Washington University has, but also the city in general [will continue],” Zavala said. “That’s why this campus needs to offer protection to immigrants, to Muslims and other marginalized people that might suffer from ICE raids for example here on campus.”

McCune, a professor in the African and African American Studies department, said that he wants to stay involved with this fight against discrimination.

After watching President Donald Trump’s address to Congress on Tuesday night, he felt that there was a disjoint between what Trump was saying and what he was doing.

“It’s very difficult for me to listen to [Trump] try to challenge the violence that was done to American soldiers when he is enacting violence to American people and their families, the family folk who are immigrants, who are undocumented. The violence against these folks is in direct contrast to his opinions that violence is bad. Is it only bad for U.S. citizens? Is it only bad for soldiers? I think that is the motivation for me, to realize that this is all connected,” McCune said. “If we believe that as a faculty and we believe that as a university, then we should be doing the work to make this campus a sanctuary.”