Students making their morning walk to class Wednesday morning were confronted by a different type of sign at the Underpass: one held by students above the bridge protesting the use of tuition funds.

The protestors call themselves the Liberation Coalition, and besides claiming “Your tuition funds systemic violence,” their sign advertised an event happening this Sunday, Oct. 9 at 3:30 p.m. on Mudd Field. 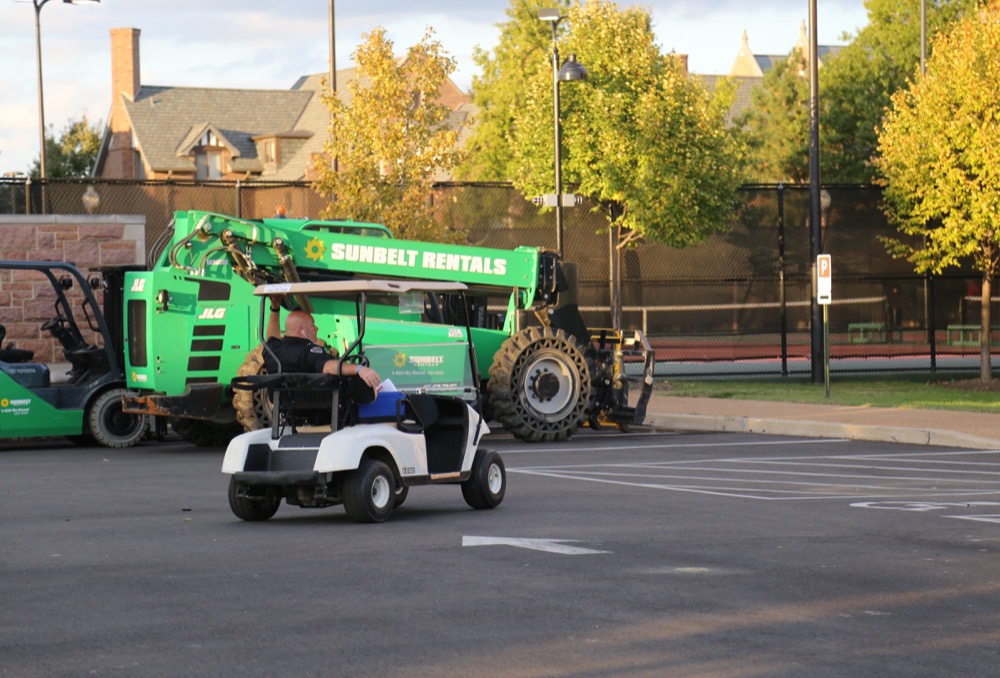 A police officer watches out for unauthorized persons from a golf cart on the west end of Seigle Hall.

That event, a collection of speeches organized by the Liberation Coalition, will be just one of the many protests occurring on or off campus before, during and after the presidential debate.

“A lot of student groups on campus have been feeling upset with the election,” senior Zunaira Komal, one of the organizers of the Liberation Coalition, said. “So students started coming together around that idea. I would say that’s the driving force because a lot of communities feel like they don’t have a voice in this election.”

Other than the Liberation Coalition, events in favor of both third party candidates—Gary Johnson of the Libertarian Party and Jill Stein of the Green Party—will be held near campus on the afternoon of the debate. Even Cherokee Street will get in on the action with an event to bash a pinata in Donald Trump’s likeness.

On campus, the events will be a bit less raucous and less widespread. Because only students and credentialed members of the media will be allowed onto Danforth Campus the day of the debate, a designated Public Expression Zone has been set up on the intramural fields for anyone, student or not, who wishes to protest peacefully.

“[The Washington University Police Department] will have a small detail of officers to assist in this area,” Chief of Police Mark Glenn said of the Public Expression Zone to Student Life in an email. “The goal is to allow people and groups the opportunity to express themselves in a safe environment.”

In tandem with the Liberation Coalition’s event will be a march starting from the Delmar Loop, organizing on the principle of “Say No to Hate.” The march consists of around 15-20 community groups, and they expect to bring nearly 2,000 people from the St. Louis community to the debate.

According to Komal, the march—in part organized by members of the Show Me $15 movement—approached the now-leaders of the Liberation Coalition about starting a collaborative debate rally. The students responded well and decided to start their own protest on campus, where the community protestors would not be allowed to go, closer to the debate.

“The idea is to have a distinct student voice that is a coalition of activists who are more left, more radical and have it be a sustained thing that features after the debate,” Komal said of the protest’s goals.

On the University’s end, however, the potential for protests has raised security concerns, but there’s little the University hasn’t considered.

“We have worked closely with area law enforcement leaders to develop a response plan,” Glenn said. “Our priority is ensuring the safety of persons expressing their First Amendment rights. We will communicate with all groups, as well as individuals, to support their right to express themselves freely while keeping everyone safe.”

Specifically, the potential for outbursts within the debate hall have posed somewhat of a non-preventable risk, as security can do nothing prior to the debate to prevent attendees from speaking their mind.

Steve Givens, associate vice chancellor and chair of the presidential debate steering committee, doesn’t expect anything of that kind to occur, but recognizes the unpredictability of the situation.

“[Outbursts] happen so quickly and it happens with just one or two people so there’s really no way to control that,” Givens said. “I think the most important thing about the debate is that it goes off well and all the people watching the TV get to hear it, get to see it. So, those people—they would be removed as quickly and as peacefully as possible if they decided they wanted to try to disrupt in some kind of ongoing way.”

The Liberation Collective for one has worked extensively with WUPD and the debate security staff to prepare beforehand. Senior Christian Ralph, another one of the organizers, noted that the group had wanted to be proactive about communicating with security because the heightened presence could put people on edge.

“To have this action on campus and then police trying to figure out what their response is, I think it’s important thinking about all those different dynamics beforehand and coming up with solutions A, B and C, and I think we’ve done a pretty good job of that up to this point,” Ralph said.

Komal did wonder about how the heightened security could disproportionately affect the students involved in the coalition as opposed to the community members.

“I think as Wash. U. students we have a pretty privileged space on campus where we will be protected by the security. I think community members are more at risk,” Komal said.

Both Komal and Ralph stressed that the demonstration and march were not meant to show favor to one candidate or another. Rather, the idea behind the protest is to tackle the policy issues that they feel have been forgotten in the rhetoric of the election.

“Our focus is on these specific issues that we’re bringing up, both candidates need to address these issues that they’ve ignored,” Ralph said. “It’s less about the people running for president and more about the marginalized communities that their policies will impact.”

“The idea isn’t to protest and get the candidates to radically change their policy, the idea is to be like ‘these things are happening, we aren’t talking about them and especially, we aren’t connecting these things,’” Komal added.

As for tangible goals the organizers hope to see come of the protest, both Ralph and Komal reiterated the right of workers to unionize, raising the minimum wage and ending U.S. occupations abroad, among other issues.

For Komal, these goals represented more than the actions the University has taken in the past.

“The idea is not to have another faux diversity day created or another person hired who’s for diversity and inclusion,” Komal said. “That’s not the point. The point is to make these political decompression spaces on campus, which I think are more important.”