The 24th annual KWUR week will feature performances from a variety of musical genres, ranging from experimental to classical music.

The series of performances throughout the week will include opening sets from several Washington University students, culminating in a show this Friday at the Gargoyle headlined by Anderson .Paak & The Free Nationals. 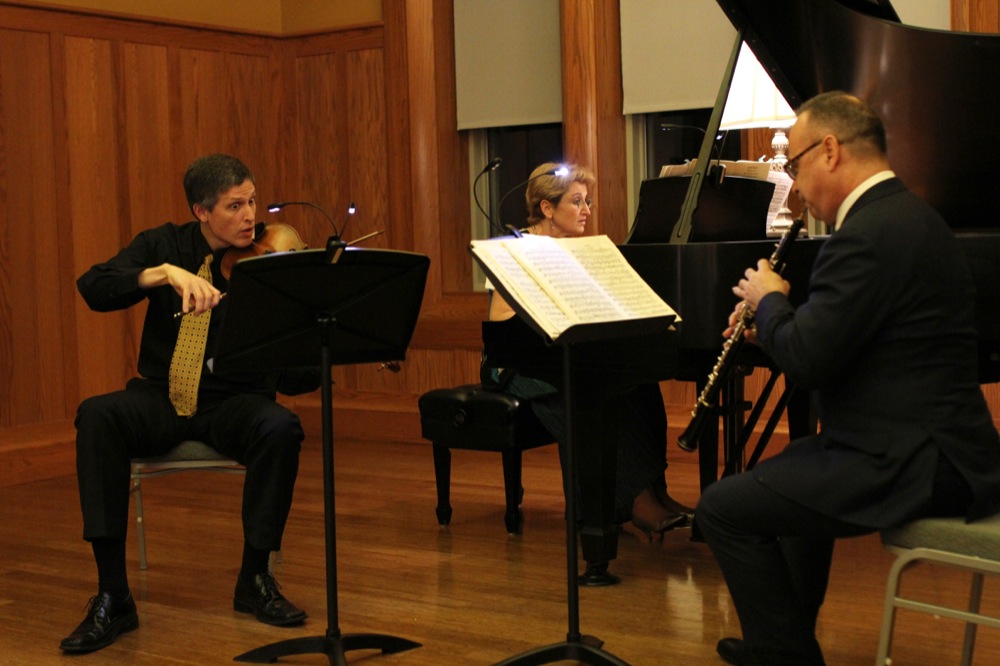 The classical group Ensemble Schumann performs in the DUC’s Goldberg Formal Lounge on Monday evening. KWUR helped bring the trio to campus in coordination with the DUC Chamber Music Series as part of the 24th KWUR Week.

KWUR Events Director and junior Dylan Bassett hopes that the headliner and student performers will help attract more students to the shows.

“This year we dramatically expanded our budget and we’re hoping to increase our attendance,” Bassett said. “We’re aiming to have upwards of 300 people at Anderson .Paak, 200 at [rapper] Smino and between 50 and 100 at the local showcase. We’ve done a lot of things that will hopefully prepare us to do this.”

KWUR General Manager and senior Eleni Anas echoed the importance of exposing students on campus to different artists and genres of music.

“Outside of WILD and a couple of occasional Gargoyle shows, there isn’t a ton of that stuff going on. We’re trying to fill an empty space, in a sense, and do something unique to the campus and it’s all free, which we think is important because a lot of the reasons why people won’t go to a show is it gets expensive to pay $20 for a ticket every single time you want to see a band,” Anas said.

Anas believes that this new approach will be well received compared to previous years.

“Last year when I was events director, we had a more experimental focus for KWUR week so they were well attended shows but definitely not something that was as marketable to Wash. U. as a whole. This year we’re anticipating the opposite because of the types of artists we’re bringing,” Anas said.

Bassett said that headliner .Paak, will provide the audience with an up-and-coming, recognizable act with diverse musical tastes.

“Fortunately we were able to get Anderson .Paak and his band The Free Nationals and they fit all of the bills as energetic pop musicians who can get a crowd to go crazy but can also play more mellow music.”

The California-based singer, rapper and producer is signed to Aftermath Entertainment alongside Jon Connor, Eminem, Kendrick Lamar and Dr. Dre. His most recent album, Malibu, was released to widespread critical acclaim. Anas discussed excitement among the student body for .Paak’s performance.

“People are very excited about him coming,” Anas said of .Paak. “He was just at [the Austin, TX music and arts festival South by Southwest] and he was playing stages to around 1,000 people. We managed to get him right when he’s about to blow up so I think there’s a lot of excitement.”

On Monday, over 70 people filled the Goldberg Formal Lounge to hear the Ensemble Schumann perform works by their namesake and other classical composers.

KWUR Production Coordinator and freshman Jordan Weinstock described Soft Fangs as a solo project that has grown into a well regarded trio. Weinstock described Horse Jumper of Love as a band within the slowcore/shoegaze genres, in the vein of bands like Pavement and Codeine.

Rapper Smino will be performing on Thursday at the 560 Music Center. Opening for him is senior Akeda Hosten, who was featured in Black Anthology earlier in this semester.

Saturday’s local punk showcase at The Gargoyle will feature The Brainstems, a garage rock band composed of WU alums, and Hardbody, a math rock experimental trio from St. Louis.