Burnham, a Massachusetts native, burst onto the scene at the age of 16 with YouTube videos of songs poking fun at white supremacy, homosexuality and a sexual relationship with Helen Keller. Burnham’s success has since ballooned: His YouTube videos have been viewed over 152 million times and he has released four comedy albums.

“He has a huge, almost cult-like following, and such a persona around him—this theatrical and boisterous stage presence,” Vatsan said before the show. “My biggest concern is that we won’t have space for everyone, as Graham Chapel only has a capacity of 785.”

Over a hundred students were turned away at the door—the remainder of the line stretching from Graham’s front door to the Danforth University Center was cut off from entry. Hours before the 7 p.m. door opening, a line began to form that eventually stretched past Simon Hall. To ensure a spot at the show, students were forced to wait in line far in advance.

“We got here at one o’clock,” freshman Kelly Minster, the first person in line, said. “I brought snacks and went to the DUC right before. I’m hoping that I’ll meet him; I know that’s not going to happen, but I’m just hoping it’ll be a good show.”

“I found [Burnham] in 2009, on YouTube. I had class, but I got here as soon as I could,” her friend, freshman Alexis Schwartz, said.

“This is the largest audience that we’ve ever had for an SPB comedy show,” Vatsan noted in her introduction to the show.

SPB Comedy Director Maansi Vatsan stated that Bo attracted the largest crowd for an SPD comedy show. Many people were turned away from the show as Graham Chapel reached maximum capacity.

Those who made it into the chapel sat under blue lights and listened to Gregorian chants instead of the usual top 40 fare, because Burnham’s production manager thought it was funny, according to junior Becca Mandel, a member of SPB.

Burnham came prepared to quip at anyone’s expense. His trademark sarcasm was on display quickly, as he noted, “The tickets are free; you’re getting your money’s worth tonight.”

From the show’s beginning, Burnham made a point of targeting politically sensitive topics. In an early song, he rapped, “If you don’t give a f— about the law, let me hear you say, ‘F— the police,’” then following the audience’s cheer, countering “If that seems oversimplified, let me hear you say, ‘It’s a tough job and they’re doing their best.’”

But a darker undercurrent of self-awareness and depression ran through Burnham’s comedy all evening.

“Come and watch the skinny kid with a steadily declining mental health and laugh as he attempts to give you what he cannot give himself,” Burnham continued, before returning to criticisms of Chipotle and Pringles cans. 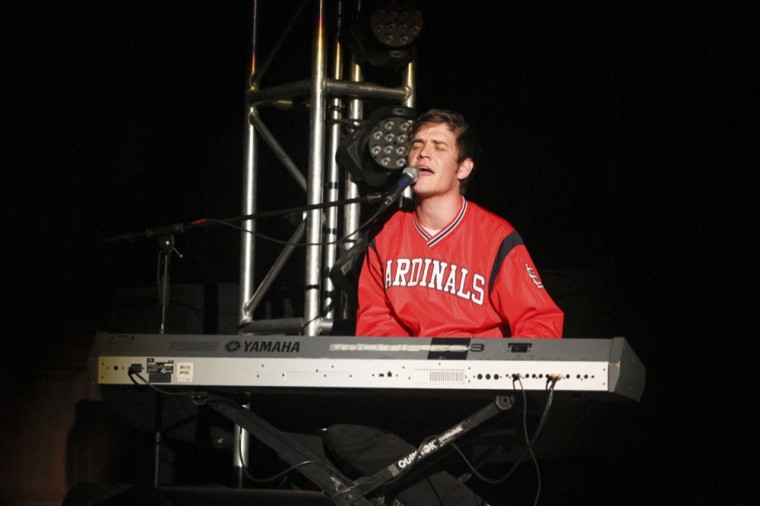 In addition to his standup, Bo performed musical bits that got the crowd singing along and improvised by poking fun at students.

On the whole, the audience left the chapel pleased with Burnham’s theatrical mix of sarcastic political incorrectness and confessional introspection.

“I was the only one in the room who didn’t really know him, and I thought he was hilarious,” senior Harrison Kay said.

“I loved it; he was born to entertain,” freshman Andrew Hawkins said.

“He knows how to make you laugh. His comedy is very sophisticated. His use of song, and other voices and lighting makes it a full performance,” senior Benjy Forester said.