Mae Jemison, the first African-American woman to go to space, spoke in Graham Chapel on Saturday about her time with the astronaut program and her work with the 100 Year Starship program.

Mae Jemison, the first black female astronaut, speaks to a crowd of students and faculty in Graham Chapel on Saturday afternoon. The speech was sponsored by EnCouncil and was the capstone event for EnWeek.

EnCouncil decided that an astronaut would be ideal for a keynote speaker for EnWeek because of the recent developments regarding space exploration, including private company SpaceX’s recent launching of a Falcon 9 rocket to deploy two satellites beyond Earth’s atmosphere.

“There were a couple astronauts we were thinking about, but then we narrowed it down to Mae Jemison, and we thought she would be the coolest and had the most to talk about. And it was kind of something different,” EnCouncil President and junior Trevor Crawford said.

To start her Speaker Series talk, Jemison thanked the audience members for their time and spoke of the importance of choices and time in her experiences.

“Right now, you are sharing your time, and time is the one truly irreplaceable commodity that we have at our disposal. Time presents us with a paradox because while our time is limited, it has infinite possibilities,” Jemison said. “86,400 seconds each day, and each one of those seconds is extremely precious because we can do with each of those seconds exactly as we please, but we can never get a single one of those seconds back. It’s what we choose to do with our time that gives it its unlimited potential.”

Jemison noted that in her childhood, she didn’t do anything special that made her the kind of person who would eventually go to space.

“People ask me what I was thinking about growing up, and the truth is, I played with Barbie dolls. I had chemistry sets, too. I was an original series ‘Star Trek’ fan. And I thought about infinity,” Jemison said.

She took the time to speak about the importance of the original ‘Star Trek’ series, paying homage to the show’s stars Leonard Nimoy, who played Spock and passed away on Friday, and Nichelle Nichols, who played Uhura and was a key player in getting women of color into the astronaut program.

“We can imagine ourselves and model ourselves and our behavior on people who don’t necessarily look like us. But we have to be open,” Jemison said. 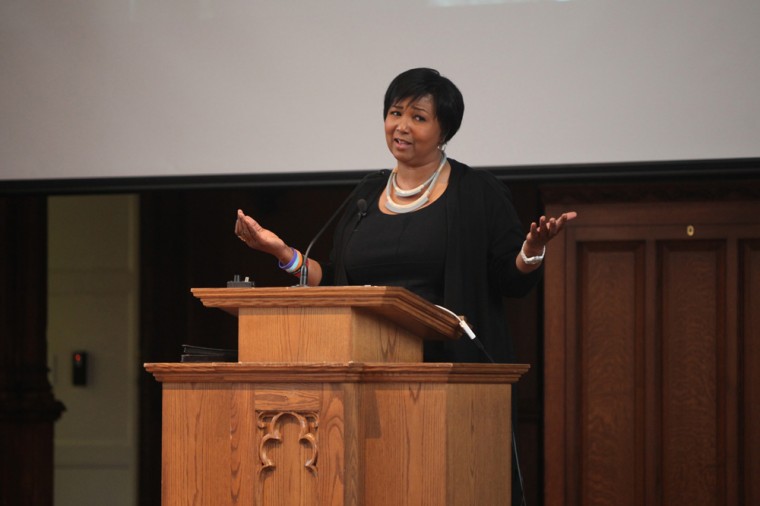 Mae Jemison, the first black female astronaut, speaks to a crowd of students and faculty in Graham Chapel on Saturday afternoon. The speech was sponsored by EnCouncil and was the capstone event for EnWeek.

Jemison then turned toward her work with the 100 Year Starship program, which intends to ensure that the capabilities to send humans to another star will exist in the next 100 years.

“We believe pursuing an extraordinary tomorrow creates a better world today,” she said in explaining the program’s importance.

She spoke about the extreme creativity and openness of mind required for the project, noting that it is a “black sky” rather than a “blue sky” project, meaning they really have no idea what will come next.

“We know how to get to the moon. We’ve been there. We have a lot more sophisticated technology now. We know how to go to Mars. We know Mars’ address. We’ve been there. So here is the idea of this black-sky paradigm: in order to do things with a black sky, you have to be open, you have to be flexible, there are many more pieces that you have to do,” Jemison said. “To do interstellar looks completely different. It will be as different as the Enterprise is from the shuttle.”

The event coincided with the Society of Women Engineers’ Women in Engineering Day, where high school students from the St. Louis community were brought to campus to learn more about engineering. Many of these students were able to attend the talk as well.

During the question-and-answer portion of the event, a male student asked Jemison about the problems associated with getting a man on Mars, and she was quick to remind him of the necessity of including women in this type of discussion.

“The first technological issue of man-to-Mars missions is that men can’t do it alone. It’s going to have be a human mission to Mars. I think sometimes our language gets in our way, so I’ve really been pushing for human exploration because human exploration is what we’re really trying to do,” Jemison said.

Students were generally pleased with the presentation and excited to have had the chance to hear such an influential person from the field speak.

“I thought it was very inspiring, very far-out, but it sort of challenges the ways that you think about things. I’ve been interested in NASA since fifth grade, so it was cool,” freshman Sydney Katz said.

“It was just really interesting to hear things you don’t get to hear about every day. I thought it was great; it was really informative. Mae Jemison is this really great person, and it was fun to listen to what’s out there,” prospective student Erick Gloria from Illinois said. “Even if I don’t end up studying science or engineering, it’s just really cool to learn about that stuff.”