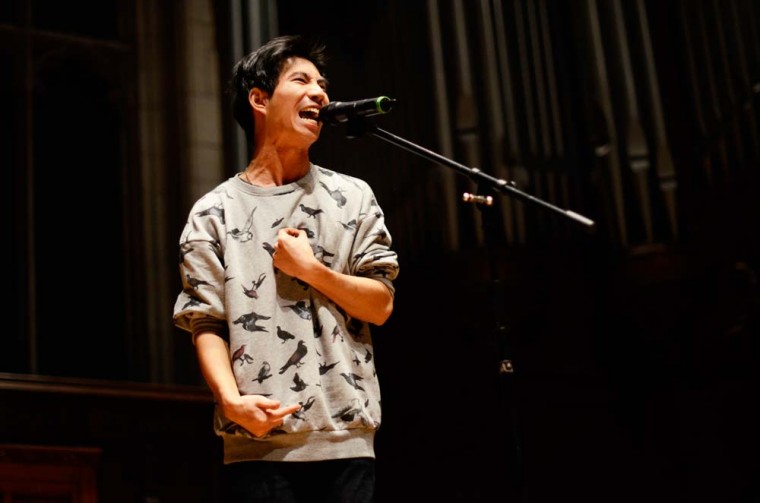 Following the success of last year’s Grand Slam featuring Grammy-winner artist Mary Lambert as emcee, this year’s show filled Graham Chapel. Students said they were just as excited to see their peers perform in the competition.

The Grand Slam, which lasted about three hours, is the last competitive show of the school year that WU-SLam hosts. Seven winners from the past four monthly slams and three wildcard entries chosen by WU-SLam’s Performance Crew performed in the contest alongside guest performer Hieu Minh Nguyen, a Minnesotan poet who also served as emcee.

“His poems speak to me in a way that a lot of other slam poets miss,” Lai said. “I think a lot of his poems revolve around a single moment and trying to explain it and in explaining it, revealing something very poignant about his life or his situation, many times which are heartbreaking.”

Hieu Minh Nguyen was particularly impressed with the poets he shared the stage with this year.

“I thought it was some of the most innovative, urgent, important work I’ve heard in a very long time,” he said.

Student attendees like sophomore Danny Washelesky were similarly moved by the poetry.

“There were a lot of really powerful pieces and the poets performed incredibly well,” Washelesky said.

Others, like freshman MK Mollman, admired the deeply personal aspects of the poets’ works.

“I thought it was really powerful, and I think it takes a lot of courage for people to get on stage and just show so much of themselves to complete strangers,” Mollman said.

Slam performers credited their success in part to Poetry Prep, a workshop that ran from 9 p.m. to midnight every night since students returned to campus, where the poets wrote, revised and practiced their pieces.

Freshman Jesse Huang, who organized Poetry Prep, helped the performers through the revision and rehearsal of their poems and was eager to hear them perform in front of an audience.

“It’s been an honor to watch all of them work on their stuff and share it with me,” Huang said. “I just really love everything that everyone’s doing, and I think it will be really, really great.”

Several of the performers spoke highly of the preparation program.

Senior Ben Tolkin said that even the night before, he was working hard on his poems, trying to make them exactly how he wanted them to be.

“I am still writing and editing, which is my usual plan because I don’t do a lot of work on performance at all…I try to do strange poems,” Tolkin said. “I have a lot of really nerdy poems. I have a lot of poems about random historical facts.”

Berry, WU-SLam’s vice president of special programming, was exhausted from all of the work she has done over the past two weeks but still enthusiastic about the event.

“I don’t feel like it’s the end of the third week [of the semester]. It feels like we’ve been here for two months already,” she said. “Even for the people whose poems I’ve heard many times, it’s just different to see them because the audience is there…the point of slam poetry is the audience.”