Chancellor Mark Wrighton has agreed to meet with student protest organizers about issues surrounding recent events in Ferguson next semester.

This meeting with administrators was one of student protesters’ demands of the chancellor and Washington University. Despite this demand being met, on-campus protests have continued, including one this weekend at the December degree-candidate recognition ceremony. 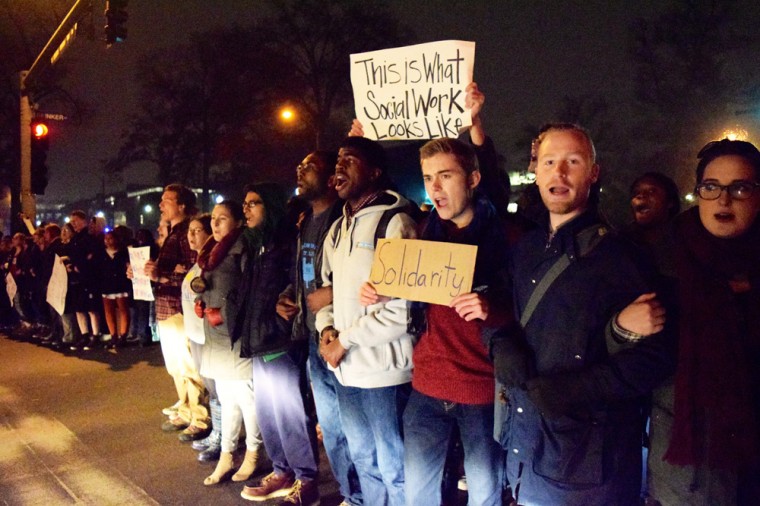 Protesters block the intersection of Forsyth and Skinker Boulevards on Thursday night, stopping traffic for around 20 minutes. Since returning from Thanksgiving break, students have increased their protest efforts against events in Ferguson.

The protests came as a continuation of both nationwide and campus protests against police brutality and racial discrimination following the grand jury decisions not to indict police officers for killing Michael Brown and Eric Garner over the summer. Brown was shot and killed in August in Ferguson, Mo., while in July, Garner was put in a chokehold by a Staten Island, N.Y., police officer and died from an asthma attack.

Thursday’s “Enough is Enough! Rally for Justice” lasted for around 90 minutes, with protesters starting by walking through Bauer Hall and Olin Library. They then chanted outside the chancellor’s house and walked to the intersection of Skinker and Forsyth Boulevards, where they blocked traffic for around 20 minutes.

Senior Reuben Riggs, a leader from activist group STL Students in Solidarity, said that the protest was intended to bring Wrighton’s attention to the importance of the issues of racism and police brutality.

“The chancellor is the ultimate authority at the University, and we think that the University needs to take a stance—why not bring the fight right to him? In [Wrighton’s] email, he said that we are fortunate that the unrest is not on our campus, so we brought the unrest to our campus and to his lawn. It’s about taking public space. This is a public issue, something people can’t ignore,” Riggs said.

According to Riggs, the protest began at Bauer Hall because a board of trustees meeting about the undergraduate experience was in progress inside the building.

“For so many of us, our undergraduate experience is cast over by a shadow that the University won’t take a stance on this. These are our lives that are in the balance,” Riggs said.

Sophomore Sarah Nesbitt marches in Olin Library on Thursday afternoon during a student rally. The protesters went on to block traffic at the intersection of Forsyth and Skinker Boulevards.

After leaving Bauer, the students entered Olin Library, where group leaders called on watching students to become involved in the movement. The protesters also filled the second floor’s central studying area, continuing to chant as some students looked on with annoyance while others didn’t visibly react. Other onlookers took pictures and video of their protesting peers.

Although some students expressed unease on social media about the protests disrupting the studies in the library, Wrighton said that he was not overly concerned with protests in study spaces.

“There are inconveniences and disruptions that are associated with everyday life. We’re facing a huge challenge in our country. A little inconvenience compared to what people are facing is not so much to take. One of the important things that has come from all of this is that there has been a high degree of consciousness raising, so that everybody knows everybody’s affected,” Wrighton said in an interview with Student Life.

The Thursday protest continued to the lawn outside Harbison House, where Wrighton lives and where the protesters continued chanting. While there, Riggs reiterated the demands the group had made at a demonstration on Monday: that the University release a statement taking a stance on events in Ferguson and the ensuing protests, and that Wrighton and other administrators meet with members of STL Students in Solidarity to discuss further demands.

Near the end of the demonstration outside the house, Risa Zwerling Wrighton, the chancellor’s wife, walked onto the porch and told the students “done” in response to their demands.

After reading the demands outside the chancellor’s residence, the protesters marched down Forsyth toward Skinker, blocking the eastbound lanes. Among the vehicles stopped by the march was the campus circulator, which emptied of passengers. The protesters continued chanting and marching until they reached the intersection.

Protest organizers arranged the participants to block all four entries to the intersection and led them in chants before commencing a 4 1/2-minute silence to represent the 4 1/2 hours that Michael Brown’s body lay in the street after he was shot.

Police maintained a presence throughout the protest to monitor the situation, parking their cars outside of the intersection blockade and following the protesters as they marched. However, they did not interfere with the students’ activities.

At Saturday’s graduate recognition ceremony, a group of protesters who identified themselves as from the group Brown School Students for Racial Justice lined the paths between Graham Chapel and the Danforth University Center as audience members exited the building. Some graduates also participated in the protest, holding up their hands in the gesture of surrender that has come to be associated with Brown’s death as they crossed the stage.

Protesters link arms outside Graham Chapel after the December graduation ceremony as graduates walk from Graham Chapel to the Danforth University Center for a reception.

Krupa Desai, who graduated from the College of Arts & Sciences on Saturday, said she thought the protesters’ actions were well-executed.

“I think it’s nice to know that people are sharing their opinions, and they didn’t disturb the ceremony,” Desai said. “It was done in a very respectful way.”

Participants in both protests felt the actions were the best way to make the issue heard by people who hadn’t yet taken interest, and many stressed the importance of interrupting daily campus activities.

“It’s really important to stand in solidarity here at Wash. U. We’re in a bubble and so isolated on campus. Even though Ferguson is so close to us, it sometimes feels like we’re in a different world, and I think it’s really important to remind ourselves that this is what’s going on,” sophomore Steve Wenzel, who participated in Thursday’s rally, said.

“I think the best kinds of protests are the ones that do disrupt things to a certain level. If they’re easy to ignore, they’re not working,” Wenzel added. “It’s nothing more than a minor inconvenience, and it just keeps it in your mind. It makes sure these things don’t fade away because when people stop talking about them, as far as people are concerned, they vanish. And these issues don’t ever really vanish.”

One protester at the graduation ceremony said that the action was intended to disrupt and express disapproval for the status quo.

“We had one person who came through who said it was completely inappropriate, but we think it is completely inappropriate that we treat people of color the way that we do in this city,” the protester, who asked to remain anonymous as a show of solidarity with the group, said. “This is our school; it’s our graduation. We want everyone to know that it is not OK. That’s what protest is about, that the status quo is not acceptable.”

Senior Jonathan Karp said that he was especially impressed by the number of students who showed up to the Thursday rally and stayed to block traffic.

“We did it on [last Monday morning] and about 40 people joined us, but this was great, this was a few hundred, and it’s so meaningful…I think the student body demonstrated today that they’re dedicated to this fight and we’re in it for the long haul. I’m excited to see what comes in the rest of the semester and into January,” Karp said.