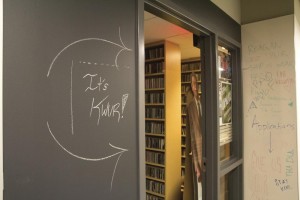 The writing’s no longer on the wall in the KWUR studio.

KWUR’s recent move from its beloved space in the Women’s Building to the Harvey Media Center in the Danforth University Center has ended an age-old tradition of writing on the studio walls, among other changes.

“We’re sad to lose our old space because there was a lot of history in it, and we’ve been in the old station since the ’80s, so our [disc jockeys] pretty much created that space,” senior Laurel Morris, KWUR’s general manager, said. “We built the shelves and drew graffiti on the walls, and all the stuff in there gave you a really good impression of what KWUR was.”

Discussions for the move began two years ago when the concept of the DUC media project was proposed, which expanded the space in the building’s media suite.

“We were under the impression that we might not have the same space we had in the Women’s Building sometime in the future,” Morris said. “It was a tough process because we weren’t super-excited about moving, but it seemed like the best option if we wanted to keep [KWUR] running and have a space several years down the road.”

According to Morris, communication during the period was difficult, so the exact reasons why KWUR was being advised to move from the building were unclear. She said the move was partially because KWUR was told that renovations to the Women’s Building would involve construction in the suite where its old studio was located.

“When we started talking about the University Center in ’97, we talked about creating a student media space where all the groups could come together, and at that point, KWUR said that they weren’t interested,” Associate Vice Chancellor for Students Jill Carnaghi said. “When we revisited the idea of the media plaza a couple years ago, which is probably three [KWUR] general managers ago, they were on board.”

Carnaghi said the idea is to foster a space where all student media groups can interact and collaboratively work with one another.

“I think KWUR liked the idea of being proud and underground, but their facilities and equipment were not so terrific in the past,” she said. “They’re just the last piece coming into this media suite.”

Along with a new studio, KWUR has been provided with new equipment for recording and broadcasting.

“We have new equipment that’ll last us a while,” Morris said. “It’s hard to run a radio station because equipment breaks all the time, and this might mean that things will run a lot more smoothly.”

Morris also added that being in the DUC has the added benefit of allowing the group to become more visible and accessible to the general student body.

Though the new suite is still not completely set up yet, Morris estimates that it will be completed by the end of the month.

“It’s taken a lot longer than I think we thought it would take to get all of the equipment set up,” she said. “But there’s been a lot of people involved in the process—people have been working on the move since the summer and for all of this school year—and we’re hoping to be ready really soon.”

KWUR member and junior Aine O’Connor said the lack of space in the new station poses a bit of a problem but appreciates the new equipment that accompanied the move.

“We have a huge music library, and there might not be enough space to store it all in the new location, which is something we figured wouldn’t be an issue,” she said. “But some of the new equipment is really nice, and it looks and feels like a really good setup, and I’m thankful that we have it now.”

“Overall, the transition from the old station to the new one is kind of sad, but in the interest of becoming a bigger station, it makes sense that we would have to move eventually,” O’Connor added.

Although KWUR staff still clings to the memory of its old studio in the Women’s Building, Morris is optimistic that the new space in the Media Center will one day feel like home.

“We had a lot of control in that old space and made it exactly what we needed,” she added. “It’s hard to move into this new space because it doesn’t feel lived in, but I’m sure that in the future, it will.”