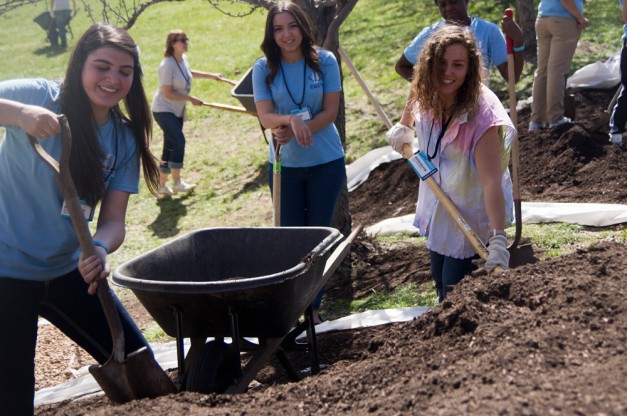 Nicole Sabbagh from Texas A&M University and Kristen Rulifson from University of California, Davis shovel soil on Sunday morning as another Clinton Global Initiative University participant looks on. The students were constructing a raised garden bed that was designed by students in the Washington University School of Architecture. The service project at Gateway STEM High School was the culmination of CGI U.

According to Clinton, Gateway serves as a metaphor and symbol of America’s future. In the last three years, there were 120,000 job openings in the country just in computer science fields, and the aggregate number of people that graduated with these degrees was roughly 40,000. Clinton believes these statistics point to a need for immigration reform and arguments for more schools like Gateway in the future.

The event began with an introduction by Chelsea Clinton, who thanked all the delegates for creating the CGI U event with the highest participation rate so far and then discussed the gender disparity seen in the workforce for STEM-related jobs and a lack of advertisement for these jobs.

Clinton was followed by Gateway’s principal, Elizabeth Bender, who stated that after Bill Clinton, she probably has the best job in the country.

“When you look at urban districts, so much of what you see and hear is gloom and doom. It’s a hard business to be in, but the nice thing about [St. Louis Public Schools] is that we’re a district on the move up, and you don’t see that a lot,” she said. “To the CGI U folks, thank you for working to change the world. We’re working to change our little piece, and the reason we do are these kiddos right here.”

As a courtesy of Brightergy Solar Solutions, 100 solar panels were donated to the high school. These panels will not only make the school more energy efficient but will also be incorporated into the curriculum of the school through business, physics and environmental science classes.

Bill Clinton believes that schools should pay to install these panels over the holidays so no classes are disrupted, and the money paid for it will come out of the savings on electric bills. The extra money, he believes, should go toward teacher salaries.

“This is the nearest thing America’s got to a win-win on our economy,” Clinton said. “The only reason we haven’t done it is because we haven’t figured out how to let people pay for energy efficiency the same way we pay for power. Pay for it out of your bill.”

“All of this is part of a promise of America, and all of this is embodied by this school, its great principal and its faculty,” he added.

Bill Clinton was also honored on stage by St. Louis Rams players Jake Long, Robert Quinn and Chris Givens, who provided him with a jersey and then each gave their thanks to the delegates for participating in the event.

Upon the conclusion of Bill Clinton’s speech, the student volunteers, as well as a group of high school students that go to Gateway, disbanded into several groups to fix different areas of the school by providing paint touch-ups around the hallways and in the cafeteria or weeding the gardens.

Senior Ryan Wilson, whose “Nation of Tomorrow” commitment focuses on targeting urban children from the ages of seven to 19 by providing them with a more global educational scope, was one of the Wash. U. architecture students at the event installing planting beds for the school.

“Architecture students have been met with the challenge of working on a design [for these beds] for a month now,” Wilson said. “For the last two weekends, we’ve been out here, actually bringing this idea to life, and what you see today is a product of a lot of hard work from volunteers from the Sam Fox School of Design & Visual Arts and a school commitment to making an area high school better.”

Sophomore Krupa Desai, along with fellow sophomores and teammates Henry Osman and Emily Santos, whose commitment “The KHE Project” was one selected for the bracket challenge, volunteered during the event by painting areas inside the school.

“I think it’s cool because we are here to make commitments and help the world, and by volunteering here, we’re helping a school that’s doing something really important in the area,” she said. “It’s awesome because the kids that go here are so excited.”

Desai mentioned that a hands-on service event was a good way to end the weekend.

“So many of our commitments are talking about helping places that are so far away that we can’t readily see, but with this event, we can really see a direct correlation between our efforts and the output,” she said. “This has really just been a great weekend of learning about service and global issues, and now doing something where we can actually see the impact of our work is just a great way to tie it all together.”

Sahil Patel contributed to this report.