Students massage to raise teen suicide awareness, but not enough for world record 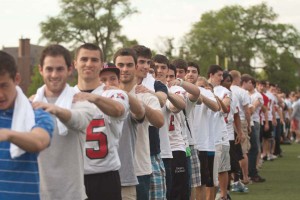 Students form a massage chain on Francis Field in an attempt to break a world record. The event, organized by Senior Michael Weiss, was intended to raise awareness for the Jason Foundation and the plight of teen suicide.

On Tuesday night, 306 students and a few adults formed a massage chain with the hope of reclaiming a world record while also raising awareness about teen suicide.

Though the record-breaking target of 2000 people stayed out of reach, former pastor Clark Flatt, the president of the Jason Foundation, said would have been happy to see his message reach just one person.

The Jason Foundation Inc. (JFI) was started by Flatt after he came home in 1997 to find that his 16-year-old son Jason had committed suicide. The foundation aims to educate people about teen suicide so people can recognize the signs if their friends or family members become suicidal and intervene before it’s too late.

Each attendee was asked to donate at least $1 to JFI. Michael Weiss, the senior who organized the event, estimated a fundraising total of $500.

Flatt thanked the crowd of 300 and asked them to spread awareness about teen suicide to their own friends and family members.

“This is awesome,” he said of the event. “This is something I know Jason is looking down on and is proud of.”

In spite of not approaching the world record, Weiss was pleased with the turnout.

The event was initially Weiss’ idea. Weiss and his teammates on the Washington University football team have been involved with JFI since their coach, Larry Kindbom, started working with it nearly three years ago.

Weiss decided to raise money for JFI by trying to bring the world record for longest human massage chain back to Washington University, after Wash. U.’s world record was broken by a group in Thailand.

In 2010, the graduating class was awarded the record for assembling a chain of 710 people, including the chancellor, to celebrate one final achievement as a class.

“I decided it could be a good event to raise awareness for the foundation,” Weiss said. “The…message that it draws is apropos to the message that the Jason Foundation tries to promote to people: be there for one another and lend a hand.”

The people who did come to the event wanted to show support for the cause and their team.

“It’s a good foundation and cause, and we thought the whole team should come out and support it,” freshman Patrick Cantwell, a member of the football team, said.

Others came because their own lives have been touched by suicide.

“I think it’s a really good organization. I’ve had a couple of friends who have been suicidal or committed suicide, and I thought I’d show support,” Alexis Kirton, a freshman, said.

Suicide is the third leading cause of death among people aged 10 to 24, and the second for college-age people. Four out of five suicidal teens display signs of being suicidal, making suicide a preventable cause of death.

“I think depression and teen suicide are really relevant issues, especially at a college campus,” senior Cassie Rowland said. “I thought it was important to do what I could about awareness and supporting my fellow students.”