Father of ‘Mother Goose & Grimm’ not always the best student, but a funny one 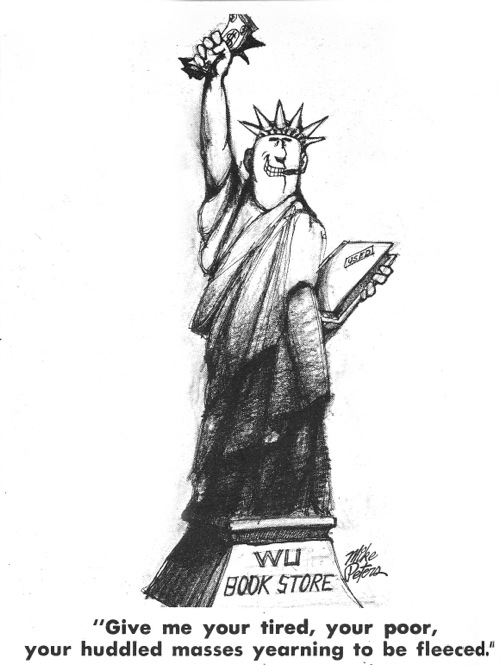 Mike Peters graduated from Washington University in 1965, but his address to this year’s graduating class on May 18 will mark his first time taking part in commencement.

Peters, who won a Pulitzer Prize for his editorial cartoons in 1981 and developed the popular “Mother Goose & Grimm” comic series, remembers taking part in so many activities during his time at the University that his grades—and chance to participate in graduation—suffered as a result.

In addition to participating in a number of activities through Sigma Chi—such as helping work at ThurtenE Carnival and emceeing the inter-fraternity sing-off, from when each Greek organization had its own choir—he acted in numerous plays and drew cartoons for Student Life and the Hatchet.

“I was doing posters for the school; I was working for the yearbook, doing anything I could besides what I was supposed to be doing because it was fascinating to me,” Peters said. “I graduated after I took a couple of extra hours over the summer, and then I got my degree in the mail.”

Peters said he was first introduced to public entertainment through his mother, who hosted a TV show based in St. Louis for about 25 years. 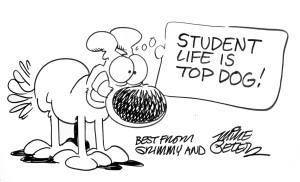 Mike Peters commemorated a visit to Washington University with a shout-out to Student Life.

Peters attended a military high school before matriculating at the University and joining the school’s ROTC program. He did ROTC for two years before his dreams of a military career suddenly ended.

“The third year I came to ROTC, the first day a major who was in charge said, ‘Oh, it’s you again.’ I said ‘Yes, sir.’ He said, ‘Don’t do this’…and I was crushed. I thought I could be an officer, have a sword and stuff that officers have.”

At the University, he also met Marian, his wife of 47 years. They met through the Greek system—Marian was a member of Delta Gamma—and Student Life, where Marian worked as a social editor for the paper that he served as a cartoonist for four years.

He said that Marian’s father, then the assistant dean of students, heavily opposed their relationship. 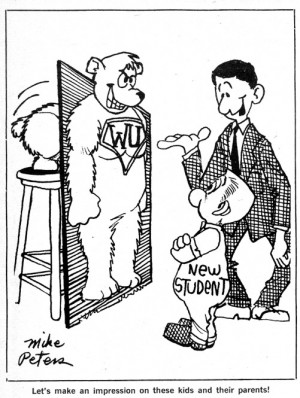 “He saw I was not a good student, and he thought by junior year I would be out of there,” he said. “He didn’t want his daughter to be dating some guy like me. He was bringing home these guys…all these doctors and lawyers and guys…really to meet his daughter, but he couldn’t say that.”

He said her father was only proud of his work after he was first published in TIME. Since then, his work has been printed in hundreds of publications worldwide, and he has garnered countless awards in his field.

His most popular strip, “Mother Goose & Grimm,” features a pet bull terrier named Grimmy who lives in a woman’s house with a cat named Attila. Over the years, he has come to identify more and more with the title character, coming to find the humor in everyday situations.

“I love Fritos, and I know that salt and grease is going to kill me … and so what I would do when I was at the office is I would take a bag of Fritos, take a handful of it, stick it in my mouth, and then when I was crunching, I’d crunch up the rest of the Fritos and throw them into the trash can,” he said. “This one day, my wife came in, and my butt was sticking up out of the trash can, and my head and body was down into the trashcan … I’m licking my fingers, and I’m getting the crumbs of the Fritos, and she said, ‘Oh my god, you’re the dog.’”

In his commencement address, he hopes to communicate to graduates the importance of enjoying what they do and following their passions, even when that may be difficult. He said there have been many times when he has felt as though he were trekking blindly through some giant maze but that all of it has led him to a job that he loves.

“People pay me money so I can try to make them laugh,” he said. “How blessed am I that I’ve been able to do that my whole life?”