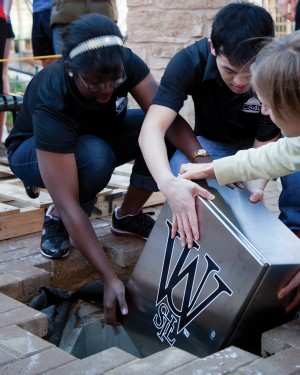 Students bury a time capsule containing a copy of Student Life, Dean McLeod’s hair, a CD, a menu and other artifacts.

Washington University students in 2061 will have special insight into campus life of 2011.

University administrators and representatives from the Congress of the South 40 buried a time capsule on the South 40 Saturday morning at the Residential College Olympics.

The capsule, which was buried under the folly next to South Forty House, contains mementos from each residential college, as well as from University administrators and student groups.

According to University administrators, the capsule was created as a pathway through which the University could inform future generations about what the University was like in 2011.

The time capsule is set to be unearthed and opened in 50 years, at which time administrators hope that the Class of 2011 will be on campus to celebrate their 50-year reunion.

At the burying ceremony, administrators said that they wished previous generations of Washington University students had created time capsules of their own.

“My only regret with the time capsule is that someone didn’t think to do it 50 years ago,” said Justin Carroll, associate vice chancellor for students.

According to Steve Hoffner, associate vice chancellor for operations, the contents of a capsule from 50 years ago would be very different from the one buried on Saturday.

“No iPads, no iPods… a notebook was a spiral thing with some paper,” Hoffner said.

Plans for the time capsule have been underway for about two years, combining the efforts of Dining Services, the chancellor’s office, the residential colleges and other groups.

The administration designed the time capsule to be opened with a coin instead of a key, to avoid the risk of losing the key over the course of 50 years.

Chancellor Wrighton chose to contribute to the time capsule a pair of cufflinks and a letter he wrote to the future Washington University community.

“I also thought about putting one of my double-breasted suits in,” said Wrighton, “but they told me it had to be very small.”

Other contents of the capsule included T-shirts, hats, flyers, a menu, a compact disc and a vial holding two pieces of Dean McLeod’s hair.

According to Nadeem Siddiqui, resident district manager of Bon Appétit, McLeod’s hair serves as a tribute to the Arts & Sciences dean and will enable future students to stay connected to McLeod.

“I think that every generation should experience Dean McLeod,” Siddiqui said.

Copies of Friday’s Student Life and the 2011 “Student Libel” edition were included as well.

Students think that the time capsule will provide future generations insight into the University’s current generation of students.

“I think it is a great idea,” said sophomore Aviya Lanis. “A time capsule is an interesting attempt to comment on society.”

Administrators say that the time capsule will help to bridge the gap between different generations of Washington University students.

“This enables students from the future to look back in a special way,” said McLeod. “To have a glimpse that goes back half a century is a pretty neat thing. Our past will be their present.”