This record is for the most people involved in a toy pistol fight held over a period of five minutes.

1. For a successful attempt, only commercially available toy pistols which launch soft ammunition such as balls or darts may be used.

2. Participants must be at least 6 years of age. Those under 14 must obtain parental permission to participate. If all participants are children, suitable adult supervision must be provided.

3. There is to be a ‘no man’s land’ of 3 meters clearly marked on the ground between the two teams.

4. The soft ammunition associated with each participant’s individual pistol is the only thing to be shot at members of the opposing team.

5. An experienced timekeeper should be present throughout the attempt.

7. The fight must last a minimum of five minutes. A loud start and finish signal recognised by all participants must be used. Two experienced timekeepers (e.g. from a local athletics club) must time the attempt with stopwatches accurate to seconds.

Washington University has set a Guinness World Record with a bang.

DUC In/DUC Out, an event hosted one Saturday every month, held the world’s largest toy pistol battle on Nov. 20.

The idea came from a brainstorming session between the Class Councils, the cosponsors of this month’s DUC In/ DUC Out, and Nate Ferguson, a senior who coordinated the entire event.

“I hoped that it would provide some excitement for students and just a different program that they probably haven’t experienced in the past,” Ferguson said.

Students said that they enjoyed the event.

“It was really fun because there were a ton of people and I got to take part in the breaking of a world record,” freshman Katie Chin said. “The actual battle itself was just OK. It wasn’t really a battle.”

Other students enjoyed all the parts of the evening.

“The best part of the Nerf gun fight was the thrill of battle and the glory of victory,” freshman Miles Black said.

According to participants, event helped to bring friends and floors together.

“Victory was made possible by the loyal and unwavering support of my freshman floor and their valiant zealotry to stand by the righteous,” Black said.

The purpose of the battle was mostly about setting the world record. The excitement came from shooting the Nerf guns rather than through the actual fight. There was little concern for specifically aiming at people.

Although the record had never previously been set, Guinness had many requirements to fulfill. 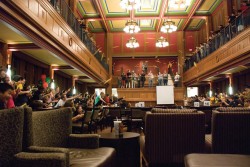 Over 400 students participate in a nerf gun fight for five minutes in order to set a Guinness record for the “Largest Toy Pistol Fight.” The battle took place Saturday night in the DUC. .

“Guinness is extremely logistically complicated,” Ferguson said. “This is a new category but apparently they already had rules for it so people from Guinness must have thought someone would try to break it.”

Guinness provided specific guidelines for the record-breaking event, including playing time, the layout of the playing field, type of ammunition, way of keeping time and even methods for counting the number of people.

The DUC funded most of the event, including the 500 guns that were used, and the Class Councils and the Student Union paid for the Guinness application.

Although not all 500 guns were distributed, the event still boasted a 468-person turnout. The people in attendance included both students as well as younger children, even some under the age of 10.

The Nerf fight, widely advertised through Facebook, garnered much attention for being a world’s largest event.

“It wasn’t actually on my mind to come down to the DUC on a Saturday night, but making a world record sounded kind of cool,” freshman Ben Olasov said.

This is not the first time Washington University students have attempted to set a world record. The graduating seniors of 2010 also attempted and succeeded in breaking the world record of longest massage chain.

“I’m very happy with how it went and I think everyone had a great time,” Ferguson said.

DUC In/DUC Out also brought a laser tag battle, magician, and Toy Story 3 to campus in September, and Ghost Hunters in October.

With additional reporting by Michael Tabb.