They were raising money for the Children’s Miracle Network at Dance Marathon, an event that Washington University has hosted 12 times since 2000.

The Children’s Miracle Network raises money for St. Louis Children’s Hospital and Cardinal Glennon Children’s Medical Center. Some children from these hospitals were in attendance.

This year marked a milestone in Dance Marathon history. The group raised its millionth dollar since the annual event began in 2000.

“It feels incredible to have been able to give over a million dollars to Children’s Miracle Network these past years,” said Hannah Elkus, co-executive director of Dance Marathon. 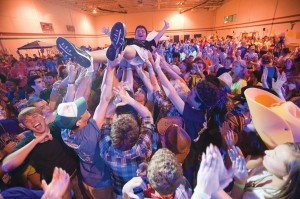 The fundraising was so successful in part because of a $25,000 donation from the St. Louis Community Credit Union.

Student participation was also at a high. This year, 83 percent of dancers were registered and had paid the ($30) participation fee, compared to 67 percent last year. (This means that they paid the registration fee of $30).

A total of 1,190 people were registered dancers, and 80 percent checked in to dance.

“It was an incredible success. We had so many dancers show up,” Snitzer said. “The twelve hours really flew by. People were enjoying themselves.”

The entire University community got involved in the event. In addition to the usual dormitory floor teams, WUStyle, an African step-dancing group; WU Cypher, a breakdancing group; Wash. U. Hip-Hop Union; and WUSauce, a salsa dancing group, all taught dances to the participating dancers.

This year’s Dance Marathon was also unique in that the University of Dayton Skyped in. Dayton was having its Dance Marathon on the same day, and the two universities danced to nineties music during the same hour. Through Skype, they danced to *NSYNC’s “Bye Bye Bye” at the same time.

Greek organizations also had their own teams. Delta Gamma and Beta Theta Pi raised the most of the sororities and fraternities, respectively.

The most spirited team was from Fontbonne University’s Fontbonne Frenzy.