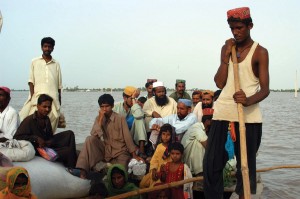 Residents of the flood-ravaged town of Ghaspur jam into a boat to retrieve food and supplies in Pakistan. They chose to stay behind and protect their possessions rather than evacuate their flooded lands. Student groups will be pulling together in a massive fundraising effort to raise awareness and collect donations through numerous events on campus.

Last year, the Washington University campus came together to raise more than $9,000 for Haiti after an earthquake killed 300,000 people.

These efforts stand in contrast to student efforts in responding to the devastating flooding in Pakistan since July. Floods have killed between 1,300 and 1,600 people and have displaced 20 million people, or one-eighth of the population.

“I don’t understand why more groups on campus haven’t taken up this effort, but I think it’s in line with the nation at large,” said junior Monis Khan, president of Drop Knowledge.

Students in Drop Knowledge, Kuumba.tv, the Gargoyle and Ashoka are all taking action.

They will be raising money for the KASHF Foundation, which provides food to Pakistanis displaced by the floods. The foundation can feed a family of five for $65, and a meal is only 25 cents.

“By giving the families the security that they have food to eat for a month, you enable them to take care of other parts of their lives that are just as urgent,” Khan said.

The money will be raised through tabling and selling shirts for $10 in the DUC, a Brother Ali concert Wednesday night, part of the profits from Diwali and an art installation that takes donations.

Drop Knowledge hopes to raise at least $1,000 before Diwali.

Providing relief to Pakistan is particularly important to Khan, who is the son of Pakistani immigrants. The recipient of a social change grant, Khan also taught children in Karachi, Pakistan this summer.

“It hit really close to home when I realized that a lot of them were caught in the floods when they went home right before school started,” Khan said.

So Khan decided to start the movement to raise awareness and funds for an event that many students are unaware of.

“I don’t really know about it,” sophomore Angela Senne said. “No one’s really talking about it.”

This attitude is exactly what Khan wants to change.

“It’s been frustrating because there’s a lot of opportunities for people to give, but Pakistan seems to be the most popular country in the world when it comes to international news,” Khan said. “It’s highlighted in such a negative light that people…it’s hard for them to sympathize.”

“It’s also such a massive catastrophe, but it didn’t kill a lot of people, so it’s hard for them to understand it. Sixteen percent of the country is still underwater,” he said.

Other students who have heard about the flood are also troubled by the apparent lack of awareness.

“The University could have brought someone who was involved in the flood to make us aware of it,” said sophomore Fahim Masoud, who is originally from Afghanistan. “Many students get their information from the media, which can be misleading.”

When Khan first approached Student Union with a fundraising idea, he was referred to planning with the Gargoyle, which has benefited from the increased funds of the Social Programming Board, a new administrative body in this year’s Student Union.

With the help of Kuumba.tv and the Gargoyle, Drop Knowledge was able to book Brother Ali, a political hip-hop artist, to help raise money.

“It’s important to get people on campus who, when they say something or perform, they move you somewhere. It transports you. It focuses you to challenge the structures in your life,” Khan said of Brother Ali’s music. “It’s righteous music that propels people to want to be better.”

The concert will be held Wednesday, Oct. 27 at 8 p.m. Students can enter for free, but a $5 donation is suggested.

Students can also purchase T-shirts for $10 in the DUC until Nov. 13.

Drop Knowledge is creating an art installation that will be able to collect funds. The installation, located on the north side of the DUC, will feature a flooded fish tank with a house inside of it. Every time someone donates money, some of the water will be released from the tank.