Former Massachusetts Governor and 2012 Republican presidential nominee Mitt Romney spoke about the future of the United States, his experience in the public and private sectors and his personal political views to a packed crowd at Graham Chapel Monday.

Brought in by Washington University’s law school as part of the Assembly Series, Romney answered questions from Dean of the School of Law Nancy Staudt, Vice Provost Adrienne Davis and law professor Adam Rosenzweig before taking questions from students. 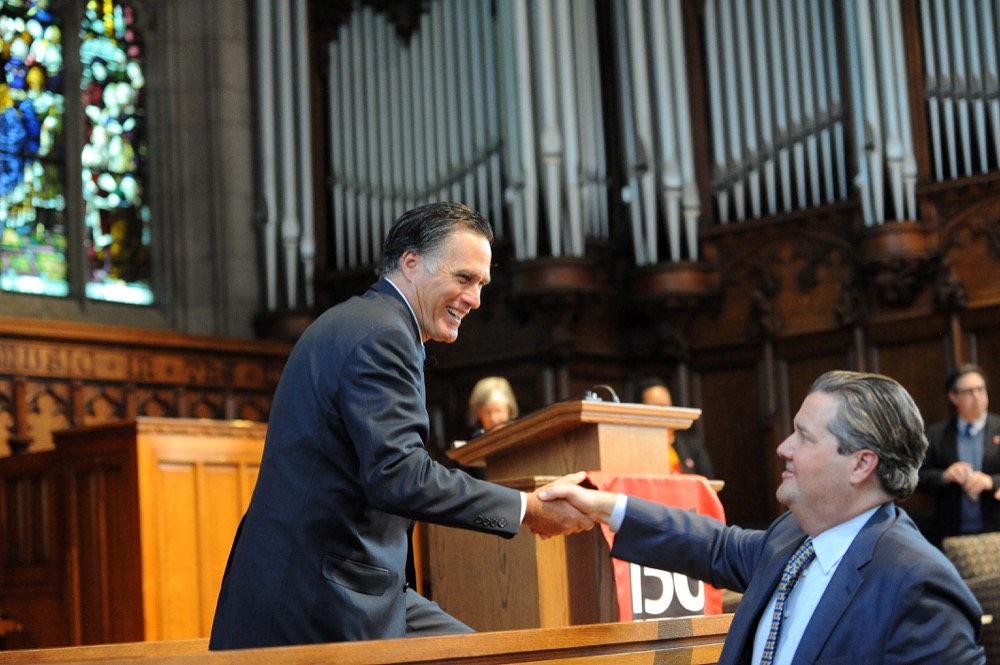 In his opening remarks, Romney discussed his path to success, saying that he has had a number of opportunities—such as starting Bain Capital, running the Salt Lake City Olympics and becoming governor of Massachusetts—that he never would have anticipated having when he was a college student.

“Nothing worked the way I thought I would. I expected that I would work for a big company and work my way up to the top—never happened. I instead followed a course of life where opportunity presented itself, and that made all the difference for me,” Romney said.

Romney also talked about how America is not just great, but also good.

“The greatness of America is not just our scale and our economic might and our military might; it is also our goodness. To be great requires not just strength but goodness, and I have seen the heart of the American people,” he said. “This is a nation that is great and good.”

Rosenzweig asked Romney about his criticism of Trump during the most recent presidential campaign. In response, Romney noted that most of his concerns were with respect to temperament rather than policy and that he considered serving as secretary of state because he believed he could help the country in that capacity.

“The concerns I’ve had about Donald Trump were primarily about character and temperament. And my concerns about policy were less focused on economic and domestic policy and more focused on foreign policy because a number of things he’d said during the campaign were difficult to interpret about what our role would be in the world,” Romney said. “I felt if I had the opportunity to become secretary of state and to help shape that policy and influence the person who now become president that I would take that opportunity willingly, not so much to support him but to support the country.”

Junior Marc Maguire, president of the Pro-Life Club, asked Romney about his view on abortion in the United States, and Romney replied that abortion is a topic where popular support will indicate politicians’ next course of action.

“I think the issue of abortion is something where politicians will follow the will of the American people,” Romney said. “If you see people very strongly on the one side of the issue or the other—that’s where the elected officials will take us. I don’t see one side or the other imposing its will on the entire nation.”

Sophomore Hannah Schanzer, an environmental policy major, asked Romney how he thought the issue of climate change ought to be attacked.

“I do believe in climate change, and therefore I look with openness to all the ideas that might address that. I think it’s very difficult for the private sector to take the bold steps you might like them to take,” he replied. “I happen to think the best way to seriously address the emission of greenhouse gases is for there to be international agreements.”

Students who attended the event felt that Romney offered an interesting perspective on issues, regardless of whether or not they agreed with his political views.

“It was interesting to hear someone with whom I have some basic disagreements with on policy—like his opinions on the electoral college system and regulations for business—but still respect as a thoughtful person trying to figure out what’s best for the country,” sophomore Aliza Astrow said. “I could tell many people who asked questions at the event disagreed with many of Romney’s political positions but were still interested in what he had to say, which is valuable in today’s political climate.”

“So much seems to have changed in four years, and parts of his speech reminded me of areas where perhaps both sides of the aisle can agree on in our era of political polarization,” sophomore Helen Li said. “I’m really glad Wash. U. brings in a diverse array of speakers because it’s important to listen even if you don’t agree with what they said.”