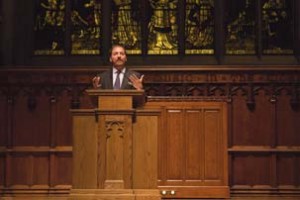 NBC’s Chuck Todd filled Graham Chapel with people and occasional chuckles while talking about what people can expect from the 2012 election: a close race.

On Monday evening, Todd, NBC’s White House correspondent and political director, said that voters will be motivated by their anxieties about the future, whether it is a student is entering a tough job economy or a baby boomer getting ready to receive social security.

Todd also discussed the viability of Mitt Romney as a candidate in his own right and not just as the anti-Obama.

“Is it an amazing feat that somebody who was painted as a Massachusetts moderate and is a Mormon, by the way, somehow won a presidential primary that is dominated by voters who are Southern, conservative and evangelical? Was it an impressive feat, or was it [that] he had bad opponents?” Todd asked. “And I think the fact is, he does deserve credit.”

In spite of the long primary season, Todd said that the Republican Party and Romney can bounce back to regain some of the moderate voters.

“The Romney theory of the base is that he acquired all the negatives of the Republican Party, everything Rick Santorum said, the average swing voter just heard that as all Republicans are saying that,” Todd said. “So [the Party] believes that over time as he’s seen as his own person…he can dispatch with some of that.”

Todd also said he thinks that Romney’s greatest obstacle will be winning the Hispanic vote, based on his history of taking a hard conservative line on immigration, which could hurt him in the delegate-rich states of Colorado and Nevada.

“If you wake up on Nov. 7 and see Romney won Florida and Ohio and is not the president of the United States, he’s only going to have himself to blame for the rhetoric on immigration,” Todd said.

“I can tell you that Romney tried to convince Republicans a few years ago to just pass an immigration bill, even if it’s a win for Obama, to get this issue off the table so they can have another conversation with Hispanics.”

The failure to do so continues to stunt Romney’s relationship with the Hispanic voters, he said.

“Because of immigration, Republicans can’t have what could be a conversation about the economy, education, small businesses…a conversation they could move [the] Hispanic community with, social issues even,” Todd said. “They can’t get past this issue of immigration, and until that gets off the table I think it’s going to be a big thing for the Republicans that’s going to be one of [Romney’s] challenges.”

Todd said that Romney will also have to define himself.

“Romney’s challenge is going to be something John Kerry couldn’t do: how can you be something more than ‘I’m not that guy?’” Todd said. “You do at some point have to have the voter that says ‘I am for Mitt Romney,’ not just ‘I am against Barack Obama.’”

Todd said that for the next three months leading up to the convention, people can expect more petty politics and stunts like the “etch-a-sketch,” making up what Todd calls the “silly season” in politics.

He noted that the media, like the public, has trouble deciding how much coverage those stunts deserve, especially when they blow up on Twitter or other social networking sites.

Todd does think that after the convention, the candidates will be forced to have a more serious conversation about the tax code and expiration of the Bush tax cuts.

“We’re going to have this high-minded debate…[but] whether it’s done in a high-minded way we’ll see,” he said.

He concluded the lecture by talking about the current political atmosphere in which political moderates are punished and the extremists are rewarded.

“We’re in a church—I’m supposed to make you feel a little bit guilty and sinful, right?” Todd said.

The lecture was hosted by the Weidenbaum Center on Economy, Government, and Public Policy.