Galloway reflects on war and art 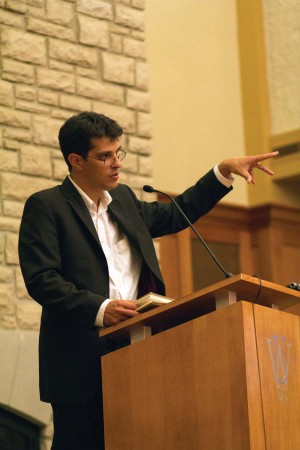 Steven Galloway discusses his novel, The Cellist of Sarajevo, during an Assembly Series lecture in College Hall Monday evening.

Steven Galloway, author of the Freshman Reading Program novel “The Cellist of Sarajevo,” addressed the importance of the civilian narrative in times of war during a lecture in College Hall on Monday.

Galloway discussed the significance of art, both visual and aural, as evidence of humanity in times of violent upheaval, and said that even though an entire nation’s infrastructure can collapse in a few fleeting moments, art is more permanent.

“Art is indestructible,” he said.

Six large, framed photographs of Sarajevo taken during the Bosnian War lined the entrance to the hall, depicting scenes directly described in the novel. The images, donated by photographer Roger Richards, showed contrasts between everyday life and war. They included laundry hanging across bullet hole-ridden windows and a woman sprinting across a street to avoid being shot by a sniper.

Galloway opened his speech by describing the photo of cellist Vedran Smailovic that inspired him to write the book.

According to Galloway, regardless of where a war is fought, the individual stories behind every casualty deserve just as much painstaking attention as the most masterfully played cello concerto.

Although Galloway resided in Canada on Sept. 11, 2001, he said the attacks still hit close to home. He criticized contemporary pro-war/antiwar debates for generally overlooking the fact that those who die in war are ordinary, common people.

“In contemporary warfare, the vast majority—90-95 percent of the casualties—are civilians,” he said.

Galloway said that he used his novel to describe the small, sometimes mundane, details of daily life during war.

According to Galloway, Sarajevan reactions to his novel have been mixed. While some survivors of the war have criticized him for writing a story about a war that he did not experience, others were relieved to see their stories reach such a wide audience.

Attendees thought the novel was an appropriate choice for the Freshman Reading Program.

“I really liked it. It was a good book that you can get a lot out of,” freshman Lauren Trusheim said.

Freshmen, who were required to read the book, upperclassmen, faculty members from a wide range of departments, members of the St. Louis community and alumni attended the speech.

The book’s narrative will have a continued presence at the University throughout the semester. In early December, Washington University Dance Theatre is performing a modern dance work inspired by the image of Smailovic playing the cello amidst Sarajevo’s ruins.

Cecil Slaughter, senior lecturer in dance and the choreographer of the piece, said that the dance is about human nature and how people react in times of crisis.

The dance will be set to Albinoni’s “Adagio in G Minor,” which was famously played by Smailovic and was an inspiration for Galloway as he wrote his book.