University hopes to sustain size of freshman class in expansion

Bigger may be better for Washington University: administrators recently revealed plans to admit classes the size of this year’s 1,765-member freshman class for the next several years until the undergraduate population reaches a total enrollment of 7,000.

With a current enrollment of 6,695 undergraduate students, the University has already increased in size by over 20 percent in the past 20 years. 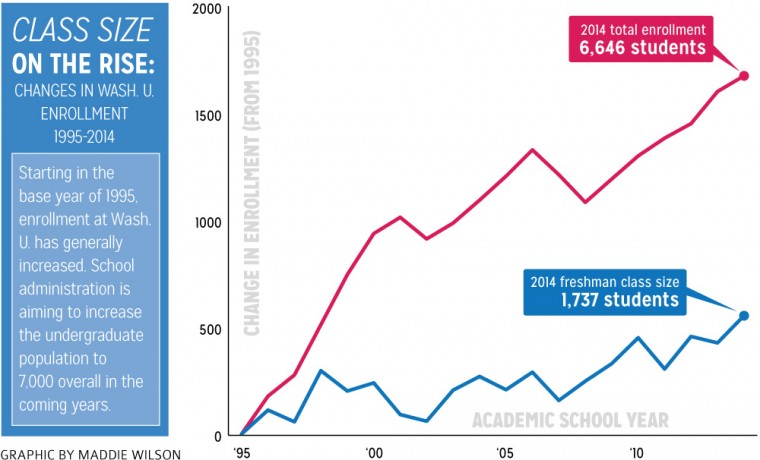 Although administrators say expansion will ultimately benefit the University and college applicants, many are concerned that the growth will negatively impact other aspects of the undergraduate experience, including course sizes and housing.

The fall of 1995 saw 1,184 incoming freshmen to the University and 4,972 total students, which had increased to 1,431 freshmen and 6,055 total students by the fall of 2008. Throughout this time, Wrighton said, the University focused on enhancing the quality of the students’ experience while trying to realize the three objectives of diversity, quality and affordability. As applicant pools grew stronger and larger, administrators felt they could expand the student body without compromising these objectives.

However, since 2009, the University has been pursuing what Wrighton calls a “soft goal” of trying to increase total undergraduate population size to 7,000 students. To achieve the goal, the University will have to create class sizes around 1,750 students each, which is similar to this year’s larger freshman class, Jen Smith, dean of the College of Arts & Sciences, said.

Wrighton said that the goal to expand the University came not from a desire to have large classes for the sake of reputation but to make the University available to the greatest number of students possible.

“You might ask, well, why do you want to grow at all? And a part of it is response to interest. More people want to be here, and we have an obligation in a way to share this high-quality experience with as many as we can realistically engage and at the same time kind of preserving the culture,” Wrighton said.

However, after reaching the desired 7,000 students, the number of undergraduates will be capped for a while, Provost Holden Thorp said.

“That was a plan that was put together before I got here, so [in terms of] the extra students this year, while it was more than we had in the model for this particular year, it wasn’t really far outside what we kind of been working towards,” he said.

However, with an increase in student population, administrators have had to look at the effects on class sizes, advising and residential life in order to reconcile the larger numbers with the school’s available offerings.

“We have a diversity of offerings, and so in order to make each one of those vibrant and viable, you want to have a good, strong student body,” Barbara Schaal, dean of Arts & Sciences faculty, said.

Schaal explained that by increasing the target number of students each school enrolls by a small amount each year, the University will get closer to its 7,000-student goal. With increases spread over multiple schools, the expansion will be less visible than it might initially appear.

“We do very, very careful planning so once we know how big the freshman class is…we begin to look at number of sections, we hire lecturers or more [teaching assistants], we make sure we have the classroom,” Schaal said. “It’s done very, very carefully because otherwise you could end up with a very unpleasant situation.”

However, Schaal noted that the real issues with the expansion will be in large introductory science courses, like General Chemistry and Biology 2960.

Smith, who also has been very active in the planning process, said that while big lecture classes will continue to increase in class size, recitation and lab sections will be added in order to keep the numbers of students per class at their current numbers.

She noted that Arts & Sciences in particular has been keeping an eye on advising sections and freshman seminars.

“Many if not most of kind of the resources we have we’re looking to keep kind of as stable at a per-student ratio as we can,” Smith said, adding that more advisors had been added this year in order to accommodate the freshman class.

Smith added that Arts & Sciences did not see massive increases in wait lists for freshmen this year—a good sign, she said, suggesting freshmen got into the classes that they wanted. Her main concern was for the coming years, when demand for upper-level courses with already-large sections would increase.

“I think that’s a place where we’re going to have to look at really carefully to try to make sure that kind of the upper-level classes in the more popular majors don’t get totally, totally swamped. We’re already talking to those departments and trying to see what we can do to get into place in the next couple of years enough options so that those class sizes don’t really go nuts,” Smith said.

Smith said that once this semester is over, the University will run statistics on average class size and see how much it has changed.

Additionally, Residential Life has seen some changes in plans this year with the increase of the freshman class and has been planning ahead for the increases in the undergraduate population.

“Considering the plan was to grow the class incrementally, it gave all of us time to be able to prepare to accommodate a larger class in all facets, including in housing,” Associate Director of Residential Life Tim Lempfert said.

Residential Life and Washington University-owned undergraduate housing made 6,720 total beds available in Fall 2014, with 3,323 being on the South 40, according to the Office of the Provost. This year also saw an increase in the number of beds available for undergraduates with the opening of the Lofts of Washington University on Delmar Boulevard, which has plans to expand through a second phase in the near future.

Since the plan to increase the undergraduate population began to take shape in 2009, Residential Life has built new buildings including South 40 and Eliot B Houses. Additionally, in order to house the larger freshman class this year, the renovation of Rubelmann House was pushed back.

However, some sophomores had to be moved to the Village due to lack of space on the South 40. This year, about 4 percent of sophomores live in the Village or off-campus apartments.

“Our hope is to be able to accommodate as many students who want to be a part of [living on the South 40] as possible, but we know that there are sophomores who don’t want to be a part of that, too, so we’re going to work with everybody to try to get them placed in housing that best fits their needs,” Lempfert said.

Lempfert said he is not concerned about whether enough total housing will be available for students next year, even if the incoming freshman class is as big as this year’s was. However, the number of beds available for sophomores on the South 40 may change.

Ashley Shin was among the sophomores who were pushed to the Village this year as a result of a lack of space on the South 40.

While she likes her apartment and the Village’s proximity to her classes, the cost of living in the Village has been the most difficult part. Shin, whose financial aid package was reduced this year to not include room and board, said that it’s around $4,000 more expensive for her to live in the Village than on the South 40.

“I think that’s the one thing that bothered us the most is that, yes, being far away from my friends, whatever, making the trip, whatever, but the money that I had to pay extra for not wanting to be there was the most disturbing thing,” Shin said.

Sophomore Sierra Kindig was also assigned to the Village because of a bad housing lottery number. Though she has resigned herself to the idea of living in the Village, she was not pleased with the placement at first.

“I feel like Wash. U. implicitly promises you that you get to live on the 40 your freshman and sophomore years. Because Wash. U. is so big on selling the community experience, it was almost as if we were being told that we could no longer be included in this community,” Kindig said.

Smith hopes that students will still be able to maintain similar relationships with faculty and other aspects of the undergraduate experience, including residential communities, even with the class expansions.

“The last thing we want is for people to get less individualized attention. Knowing each student by name and story is kind of the mantra we live by, and that’s who we are, and we would never want to lose that,” Smith said.

With additional reporting by Emily Schienvar.